Predicting a hurricane's intensity is only going to get harder 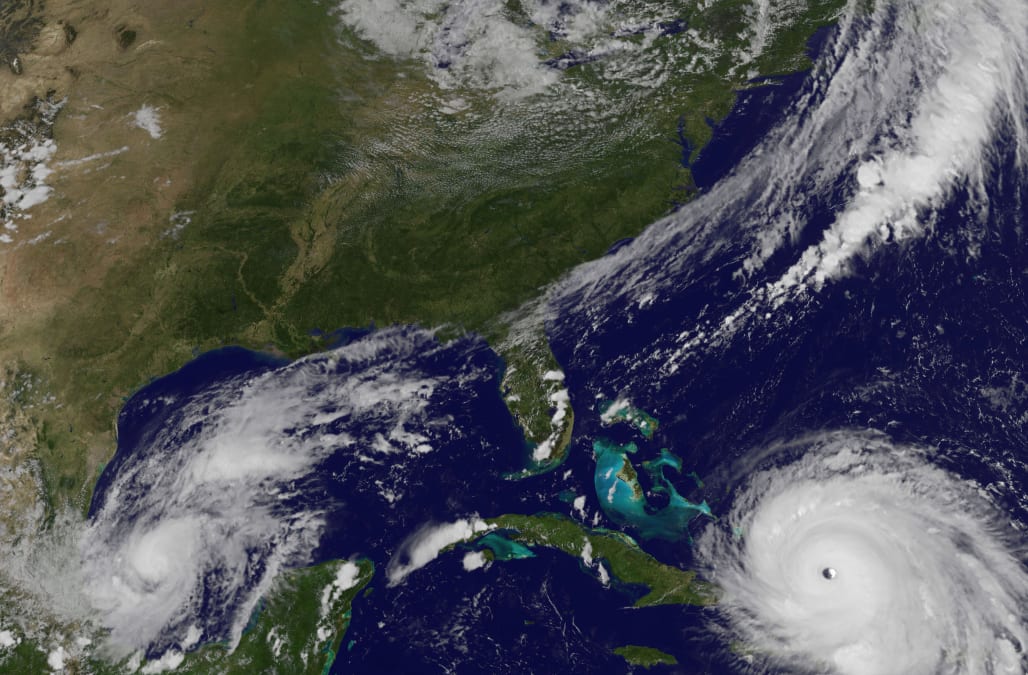 Flooding in the wake of Hurricane Harvey. Even with a lot of warning the effects were devastating. What will happen as hurricanes get harder to predict?

This week Hurricane Irma—a grandmotherly name for a monster of a hurricane—made landfall directly over the Caribbean islands of Antigua, Barbuda, and Saint-Martin. The impact was so severe that Gaston Browne, Prime Minister of Antigua and Barbuda, went on Facebook Live to say that 90 percent of Barbuda was destroyed.

RELATED: Deadliest hurricanes in US history

Deadliest hurricanes in US history

The Category 4 storm, which made landfall in Galveston, Texas, ranks as the deadliest weather disaster in U.S. history. It killed at least 8,000 people, according to the National Weather Service. The storm also flattened thousands of buildings in the coastal city of Galveston, leaving many people homeless. The city was flooded by a storm surge more than 15 feet (4.6 meters) tall.

In this photo: Men use ropes to pull away the debris of houses in order to look for bodies after the Galveston Hurricane of 1900.

Photo by Library of Congress/Corbis/VCG via Getty Images

The Category 4 storm made landfall in Palm Beach County, Florida. An estimated 2,500 people died, but the figure could be as high as 3,000, according to the National Weather Service. The south shore of Lake Okeechobee was hit by severe flooding as a surge of water topped dikes in the area.

The hurricane made a direct hit on New Orleans as a Category 3 storm, causing levees and flood walls to fail in dozens of places. Most of New Orleans was flooded, and some people who were stranded in their homes climbed to the roofs to await rescue. About 1,200 people died, according to the National Weather Service. Most victims were in Louisiana, but neighbouring Mississippi also was hard hit. Katrina caused an estimated $108 billion in damage, making it the costliest hurricane ever to strike the United States.

In this photo: Christian Schloegel stands amidst the rubble of his grandmothers home destroyed by Hurricane Katrina in Gulfport, Mississippi, on August 30, 2005.

The Category 3 storm made landfall in Long Island and Connecticut. It caused about 600 deaths, including off-shore fatalities, according to the National Weather Service. Parts of Massachusetts experienced wind gusts up to 186 miles per hour (299 km/h).

In this photo: Men search for bodies in the wreckage caused by the Great New England Hurricane.

The Category 4 hurricane struck near the Texas-Louisiana border, unleashing storm surges that reached up to 25 miles (40 km) inland in the low-lying areas, according to the National Weather Service. It killed more than 400 people.

In this photo: Wreckage shows the aftermath of Hurricane Audrey, Louisiana.

The storm ripped through the Florida Keys as a Category 5 storm. It then moved north just off the western coast of Florida before turning inland and making landfall as a Category 2. More than 400 people died.

In this photo: Rescue workers search for more victims of a 100-mile-an-hour hurricane.

Irma is the first Category 5 storm (a storm with sustained winds of at least 157 miles per hour) to ever form in the Atlantic. Hurricane Harvey was a mere Category 4—its powers of destruction came from its water content, not its wind speeds.

Irma is expected to reach Southern Florida by Sunday, leading many to worry that the United States will face two catastrophic storms in under a month. But before Irma arrives on the mainland, she will likely heap devastation on Puerto Rico and the Virgin Islands, as well as on Cuba, Haiti and the Dominican Republic. How do we know this? Because of storm tracking technology that allows us to make life-saving predictions.

Even though more people live in the path of hurricanes and tropical storms than ever—by some estimates, the global population exposed to tropical cyclones has increased by 300 percent—fewer people die from these storms. Improved predictive capabilities, like those made possible by NOAA Satellites that may be on the budgetary chopping block, allow us to see when a storm is coming and, when necessary, get out of harm’s way.

But Kerry Emanuel, a meteorologist and climate scientist at the Massachusetts Institute of Technology (MIT), warned in an article released earlier this year in the American Meteorological Society that climate change might make hurricanes harder to predict. And that will make them deadlier.

The issue, according to Emanuel, is that while our ability to see storms and understand where they’re going has improved significantly, we’re still not great at forecasting intensity—how strong a storm will be. Storm intensity matters, because a weak storm might just mean staying home for the day, while a strong storm may require evacuation.

Rapidly intensifying storms—systems that gain most of their power right before they make landfall—are the hardest to predict. If a storm intensifies quickly, that shortens the period that people and local authorities have to decide whether or not they should evacuate.

And if an evacuation is determined to be the best course of action, rapid intensification also reduces how much time people actually have to get out. Right now, for example, predictions related to Irma have given Floridians almost a week to stock up on supplies and create evacuation plans. Some residents have already evacuated. That puts the region in a much better position than if the storm had only grown to troubling intensity with a day or two to spare before landfall.

Emanuel points to Hurricane Audrey, which hit Louisiana in 1957 and caused more than 400 deaths (the sixth deadliest storm on record), and 2007's Hurricane Humberto as two examples of this rapid intensification. The 1957 storm—which was pre-satellite, and thus tracked by radar—was predicted to make landfall late in the day on June 27.

The evening before, local news media encouraged residents to wait until morning to venture out for supplies. But the storm rapidly intensified from 98 mph (Category 2) to 150 mph (Category 4) and also sped up, leaving many wholly unprepared for its arrival—both earlier and much stronger than predicted.

Humberto was a weaker storm, and as such it was less deadly. But it followed the same pattern. The storm intensified by 37 percent in just under 12 hours, which suggests that even the increased predictive capabilities brought to us by satellite technology aren't yet up to the task of predicting such rapid storm intensification.

Currently, the Atlantic hurricane season stretches from June to November, because that's when weather conditions are most suitable for the formation of storms. Here in the United States, the oceanic temperatures are at their warmest during this period—and it's warm water that fuels a hurricane.

As the global climate warms, the ocean heats up as well, providing fuel to power larger, more intense hurricanes. Hurricane Harvey and Irma both formed in seas that were warmer than usual, likely due to climate change.

Hurricane categories are based on wind speed. Category five hurricanes are at least 157 miles per hour and have no upper limit. Find out more here.

To understand how climate change would affect this rapid intensification issue, Emanuel used six different computer models to simulate both the wind and temperature effects of a changing climate over the next century. He used that information to figure out the rate of intensification, or how much more intense hurricanes will get.

Climate change doesn't cause hurricanes—they happen whenever the conditions are right. But because warm water feeds the growing storms, hurricanes are likely to be more intense as the planet heats up. Emanuel found that a pre-climate change tropical cyclone with wind a speed of 30 miles per hour in the 24 hours before landfall—a storm that doesn’t quite rank as a hurricane—would end up with winds as intense as 126 miles per hour in the 24 hours before landfall given post-climate change conditions.

Rapidly intensifying storms already exist, but under our old climate—pre-climate change—most of them looked more like Humberto than Audrey. A weak tropical storm becomes a slightly-less-weak tropical storm, not a roaring hurricane.

In applying his models to historical weather data, Emanuel found that a hurricane which intensifies by roughly 70 miles per hour within 24 hours of making landfall—enough to shift it from a Category 1, where most people would be fine staying home, to a Category 4, which causes catastrophic damage—should occur once a century. By 2100, such a hurricane could occur every 5 to 10 years thanks to warmer waters. Intensifications of 115 miles per hour within the 24 hours before a storm makes landfall, which essentially don’t exist under current conditions, may happen at least once a century if we do nothing to stop climate change.

“I am at a complete and utter loss for words looking at Irma's appearance on satellite imagery,” tweeted Taylor Trogdon, a Senior Scientist at the Storm Surge Unit of the National Hurricane Center, on Tuesday night. Decades of research has gone into making it possible for Trogdon to see and interpret the satellite imagery that left him speechless. But even with our improved forecasts, climate change could increasingly leave us blind to these dangers until it's too late.

More from AOL.com:
What hurricane categories mean and why we use them
The massive, record-breaking Hurricane Irma is on its way to Florida
Hurricane Irma threatens the United States with power rarely seen