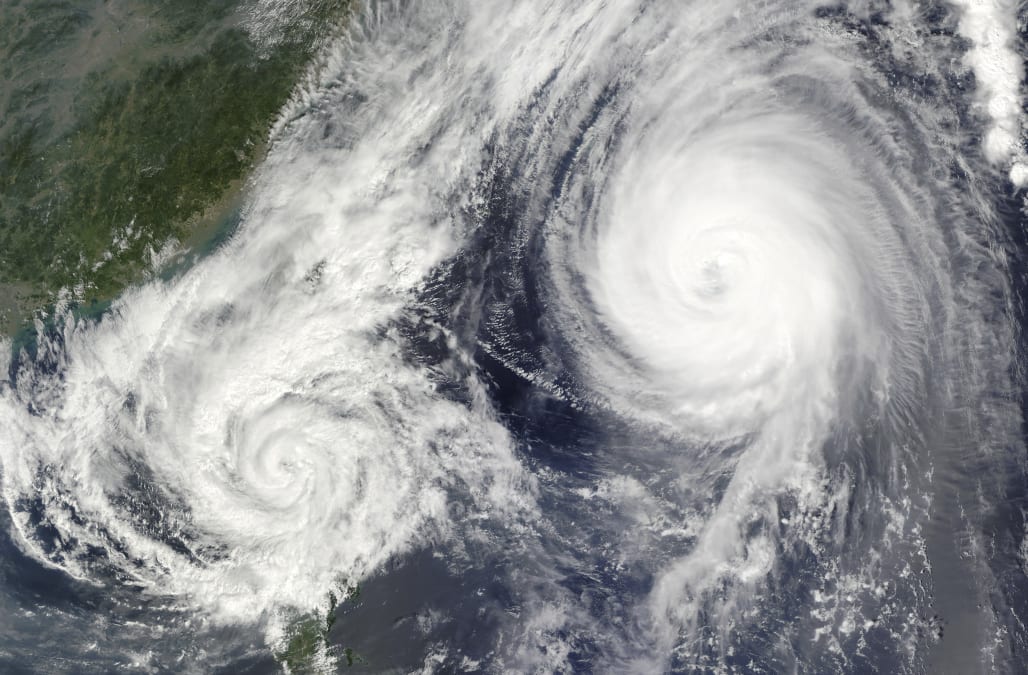 As of Tuesday morning, Hurricane Hilary was on its way to becoming a major hurricane of Category 3 intensity or greater. Irwin has intensified into a hurricane, and is now projected by several forecast models to interact with Hilary by rotating around that storm beginning on Thursday.

A rare, ultimately fatal dance is expected to occur this week between two hurricanes in the eastern Pacific Ocean. This tango occurs when two storms get close enough for their circulations to interact, sending them pinwheeling around a fixed point between them somewhat like a meteorological version of a fidget spinner.

Hurricanes Hilary and Irwin will orbit around a fixed point during the middle of the week, until one storm absorbs the other, in a phenomenon known as the Fujiwara effect.

What's even more remarkable is that at virtually the same time as the two eastern Pacific storms are interacting, an intensifying typhoon in the Northwest Pacific will also force another, weaker tropical weather system to twirl around its circulation, too.

72-hour IR satellite loop since Sat AM (U.S. EDT) showing #Fujiwhara of #Noru and #Kulap. Not much left of Kulap. pic.twitter.com/0C180MEoUb

As of Monday morning, Hurricane Hilary was intensifying about 340 miles south of Manzanillo, Mexico, and is forecast to become a major hurricane, which means it will attain at least Category 3 status based on its winds, on Tuesday.

Tropical Storm Irwin is not far behind it, located about 750 miles to the southwest of the southern tip of Baja, California. Irwin is expected to become a hurricane on Tuesday.

​​​​Computer model projections show the two storms nearing each other and interacting beginning on Wednesday, when they will pinwheel around one another like figure skaters at the Olympics. In this case, Hilary will rotate counter-clockwise around Hurricane Irwin.

Unlike most figure skating pairs, however, hurricanes can be prone to cannibalism, and Irwin's circulation will absorb Hurricane Hilary's circulation by late in the week.

There's something eerily familiar about a storm named "Hilary" that — after seemingly moving successfully and confidently in one direction — gets disrupted by the spin from another whirling system, eventually losing out to it.

Meanwhile, in the Northwest Pacific Ocean, Typhoon Noru and Tropical Storm Kulap are already interacting, with the weaker storm orbiting Noru and forecast to dissipate. This won't be a true Fujiwara interaction, since Typhoon Noru's path won't be affected by the other storm. It's more of a slingshot effect, where Noru will toss Kulap around.

The "Fujiwhara effect" gets its name from Japanese meteorologist Sakuhei Fujiwhara, who worked at the Central Meteorological Observatory of Tokyo. In 1921, he wrote a paper describing the movement of whirlpools and other types of vortices when they exist in close proximity to one another.

The dance of Noru and Kulap is especially notable since the former is shaping up to be 2017's first typhoon. Through July 19, there have been four tropical storms this year in the Pacific Ocean, but zero typhoons.

By this point in the year there have typically been three or four typhoons.

In fact, the only recorded "first typhoon" that occurred later happened on August 3 in 1998, according to Phil Klotzbach, an atmospheric scientist at Colorado State University who keeps close tabs on storm statistics.

Fortunately, none of these storms are forecast to hit land this week, although Typhoon Noru could eventually threaten Taiwan or Japan.