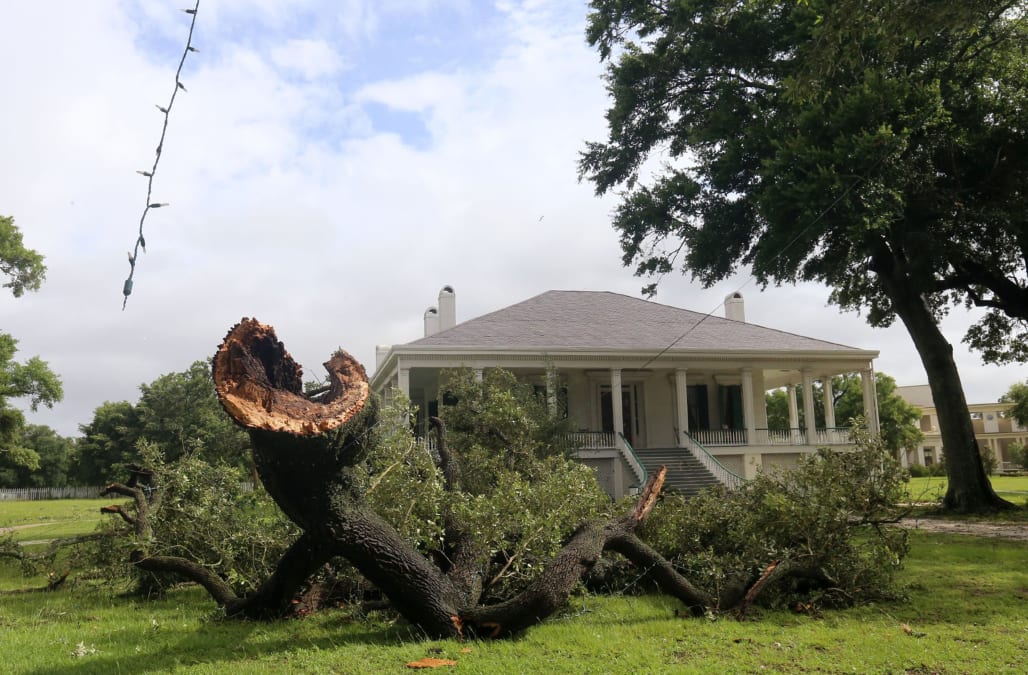 Tropical Storm Cindy made landfall on the northern Gulf Coast, between Cameron, Louisiana and Port Arthur, Texas early Thursday morning. Potentially life-threatening flooding remains the biggest concern along the Gulf Coast and in parts of the South through Friday.

See images from the storm:

Moisture and energy from Cindy will spread north and east ahead of a cold front Thursday into Friday, which will result in heavy rain and possible flooding from the South to as far north as the Ohio Valley

A tropical storm warning is in effect from High Island, Texas, to Morgan City, Louisiana, which means tropical storm conditions are expected within 36 hours. This warning area includes Lake Charles and Lafayette, Louisiana.

Satellite and radar imagery show shower and thunderstorm activity along the Gulf Coast. That stormy weather is located mainly to the north and east of the low-pressure center.

The highest rainfall amount so far is 8.50 inches in Wiggins, Mississippi. Gulfport-Biloxi Airport in Mississippi picked up 8.43 inches of rain in the 36 hours ending 4 a.m. CDT Thursday. In Florida, 8.25 inches in Navarre is the top total.

Lake Charles, Louisiana, experienced flash flooding Wednesday evening. Knee-deep water was reported on some roads, along with on/off ramps under water. There were also reports of stranded motorists across Lake Charles.

Flooding from two swollen creeks was observed in Brewton, Alabama, Wednesday afternoon. Some road flooding has also been reported in far southern Alabama and the western Florida Panhandle.

Wind gusts of 45 to 55 mph have been clocked along the Alabama, Louisiana and Mississippi coasts since Tuesday.

In Pointe à la Hache, Louisiana, shingles were blown off some homes Tuesday, due to the strong wind gusts.

Damage from a likely tornado occurred Wednesday morning in Fort Walton Beach, Florida. Two additional tornadoes were reported near Biloxi, Mississippi, where there was damage to trees, power lines and fences Wednesday morning.

Wednesday evening, storm spotters reported a tornado just north of Onycha, Alabama, but no damage or injuries have been reported.

The maximum storm surge most areas saw Wednesday morning was 2 to 4 feet (mainly east of the Mississippi River), with a localized maximum of 6 feet at Shell Beach, Louisiana, according to storm surge scientist Hal Needham.

Forecast: What to Expect From Cindy

Cindy will continue to move across western and northern Louisiana and southeast Arkansas Thursday into Thursday night.

Now that it has made landfall, weakening is expected and should become a tropical depression later Thursday.

Tropical-storm-force winds currently extend outward up to 70 miles from the center of circulation.

It's important to not focus completely on the forecast path of the low-pressure center since impacts will extend well to the east along the Gulf Coast.

Parts of southeast Louisiana, southern Alabama, southern Mississippi and the Florida Panhandle are not in the forecast path but are expected to see a substantial amount of rain, which could cause life-threatening flash flooding.

Here's a rundown of the timing and impacts for Cindy.