Much of South warned to prepare for 'historic' weekend storm 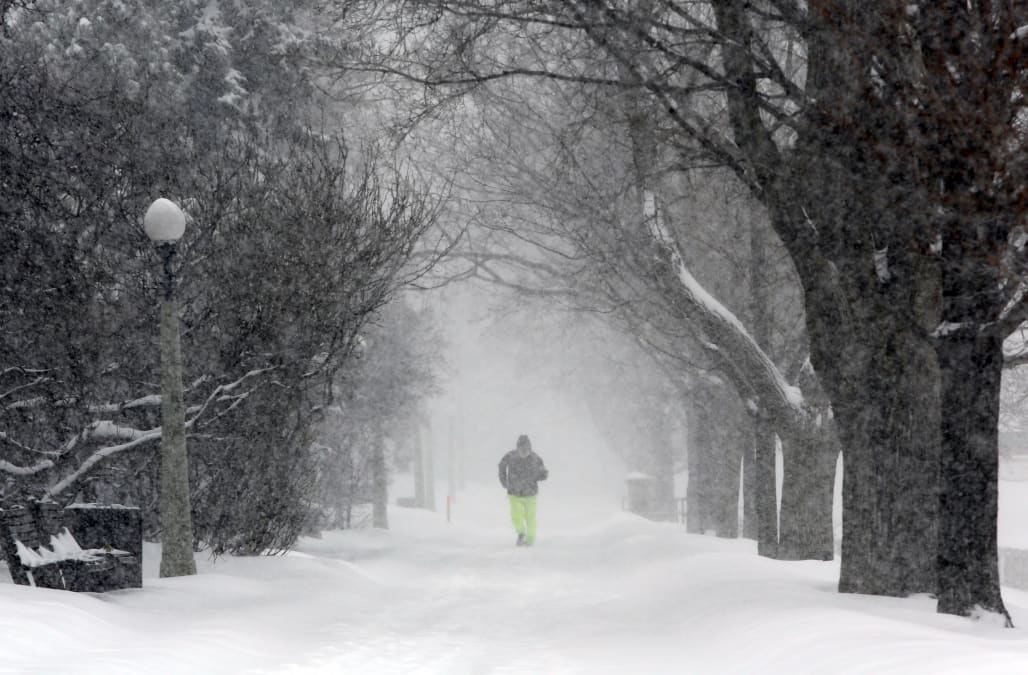 The winter weather system that has buried much of the West under record snow was racing east Thursday — on course to slam Alabama, Georgia and the Carolinas with snow and ice that authorities warned could be historic.

The National Weather Service on Thursday issued a winter storm warning beginning Friday afternoon for the northern two-thirds of Georgia, clipping the northwestern tip of South Carolina stretching through nearly the entire length of North Carolina. A chunk of east-central Alabama was added to the warning area on Thursday night.

Metropolitan Atlanta could get as much as a half-foot of snow by Saturday morning, the weather service said.

Georgia Gov. Nathan Deal pre-emptively declared a state of emergency as authorities advised residents of the entire northern half of the state to lay in enough food and water to last at least three days.

Grocery store mayhem. It might snow a little tomorrow. https://t.co/hl4mLCNnLVpic.twitter.com/DmoeXqWGm1

Michael Thurmond, chief executive of DeKalb County in metro Atlanta, warned residents: "This can potentially be a historic weather event."

The state may have caught a break: The snow isn't expected to begin until Friday night — after Atlanta's notorious traffic has had time to clear — lessening the potential for a repeat of Snow Jam 2014, when thousands of motorists were hopelessly stranded without food and water on interstates during a paralyzing winter storm three years ago.

"We do feel fortunate that it's coming in on a Friday night, where we will have the weekend to really address the roads," said Alan Chapman, director of the Transportation Department in suburban Gwinnett County.

February winter weather across U.S.
WASHINGTON, DC - FEBRUARY 13: Ai Koid, 25, fights gusty wind chills and snow while walking to the bus stop at Dupont Circle in Washington, D.C., February 13, 2016, to catch a bus to New York. (Photo by Astrid Riecken For The Washington Post via Getty Images)
Up Next

Snow was already falling over Tennessee, Kentucky and parts north, but it's when warm, wet air from the Gulf Mexico beginnings moving ashore on Friday that the real chaos is expected to begin, the National Weather Service said.

"The heavy snow will make many roads impassable and may produce widespread power outages due to the weight of the snow on tree limbs and power lines," the weather service said in a revised forecast late Thursday afternoon.

Four to 6 inches of snow may not sound like much to residents in the western third of the country, which was still being belted by record snow as high as 15 feet.

But the witches' brew of rain, sleet and snow in the South will be occurring with temperatures just below and at freezing — meaning there's a strong likelihood of a thawing-and-refreezing cycle that could coat the region in a deadly film of solid ice.

Freezing rain is "the big story here," said Kait Parker, a meteorologist for The Weather Channel. "That's a huge concern for us because that is the most dangerous and deadly type of winter weather."

Road crews across the region were preparing for a long, grueling weekend.

Maintenance workers in the South Carolina Midlands were waiting to salt most major roadways until Friday afternoon at the earliest — hoping to avoid rain that could wash the salt and brine away before it turns to snow.

"Our men and women are working as hard as they can," Alan Kozusko, a district maintenance engineer for the state Transportation Department, toldNBC station WIS of Columbia. "They've taken time away from their families, away from their usual time of work, to do the job that they do."

In Florence, in northwest Alabama, where city truck drivers also planned to head out on the streets Friday, authorities warned motorists that even freshly salted and sanded roads remain treacherous.

The city's drivers have "done this for many years, and they'll end up sliding off the road two or three times," David Koonce, manager of the city's Street Department, told NBC station WAFF of Huntsville.

"It's slick conditions out there in these spots, and we tell people [to] stay in if they can," Koonce said.

The National Weather Service predicted conditions that even it called seemingly implausible in North Carolina, where Gov.-elect Roy Cooper canceled most of the weekend's inauguration ceremonies in Raleigh, including the traditional inaugural parade.

A couple of important announcements on the Inauguration: the Inaugural Parade on Saturday is cancelled due to inclement weather.

The heaviest snow is expected north of a line along Interstate 64 from Chatham County through Raleigh and Rocky Mount, forecasters said. South and east of that line will get a mix of snow, sleet and freezing rain.

"So counter-intuitively, this area could see a reduction in snowfall totals but an increase in potential impacts due to very poor travel conditions as a result of the possible freezing rain," the weather service said.

Harris Teeter ran out of carts. RAN OUT OF CARTS. #snOMG#CLTwx

The North Carolina Zoo in Asheboro said it will be closed all weekend for the safety and welfare of its animals and guests alike."

At Burke Brothers Hardware in Raleigh, the state capital, frantic shoppers have "cleaned us out more or less so far," Jeff Hastings, an employee at the store, told NBC station WRAL.

Stuart Davis, who works at Briggs Hardware in Raleigh, agreed that the snow will be "good for business." All day Thursday, people have been calling "asking if we have sleds, ice melt and snow shovels," he told the station.

Meanwhile, in Clemson, South Carolina, the folks in charge of Clemson University's marching band were huddling Thursday to figure whether and how the band will make it to Tampa, Florida, for the Tigers' college football national championship game Monday against the University of Alabama.

The band is making the 575-mile journey in buses able to accommodate all of its instruments and equipment. It was scheduled to depart on Saturday.

"I want to be absolutely safe, doing the right thing," Mark Spede, director of the Tiger Band, told NBC station WYFF of Greenville. "So it's just a little bit of added stress that I wish I didn't have right now."