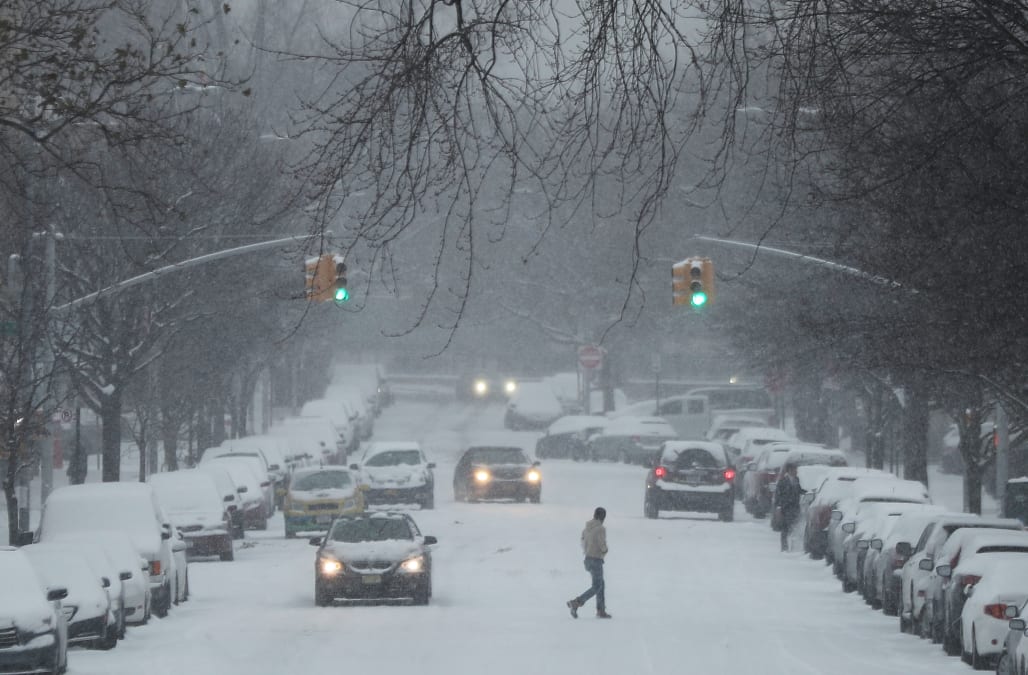 Drivers were warned to stay home as a cold front struck the Midwest and rolled east, canceling hundreds of flights and sparking crashes on slick roadways.

Washington Dulles airport's runways were completely closed Saturday morning, while police in Baltimore reported a multi-vehicle pile-up on the southbound I-95.

Winter storm warnings were in place from Wyoming to Wisconsin and Michigan, and a wide band of the country from the Texas panhandle up to Maine were under a winter advisory heading into the weekend,

The Minnesota State Police reported 490 traffic accidents statewide from 1 a.m. Friday through shortly before 9 p.m., one of which led to a death. Parts of the state got a reported 5 inches of snow.

"The next few days are going to be pretty challenging," Lt. Robert Zak said. "We're advising everybody to stay home if at all possible," he said.

#MSPcrash I94 EB near Rothsay 2 veh crash(car vs semi)no inj. Dog from the car ran off. I went on the search and found the scared & cold dog pic.twitter.com/aAWjEJs9HJ

The storm will strike the Great Lakes, Mid-Atlantic and New England through the weekend, forecasters said. In the Mid-Atlantic, the southern edge of the system will deliver ice.

"That's going to make for some tricky traveling for anyone driving around the Mid-Atlantic area tomorrow night," said Weather Channel meteorologist Roy Lucksinger.

RELATED: The best products you need to survive a snowy winter:

Houston could see temperatures plummet from the high 70s to the low 30s over the weekend, the city's office of emergency management said.

But the weather system will also create south-southwest winds that will move into the Northeast Saturday night — creating a temporary warming expected to push temperatures up from below freezing to the mid-to high-50s and causing much of the leftover ice and snow to melt, Lucksinger said.

Meanwhile, on its most southwestern edge the storm will create particularly harsh weather in the Mississippi Valley, including up to two inches of rain and the possibility of tornadoes.

Those in the Midwest should not expect any reprieve from the harsh temperatures, and their snow will likely stick around as it will remain below freezing.

"They're going to have a white Christmas, let's just say that," said Lucksinger.

By Monday, the storm will have dissipated for the most part.

The East Coast was preparing for another blast of winter weather. The New York City Department of Emergency Management issued a hazardous travel advisory for Saturday, and said one to two inches are expected.

In Chippewa County, Michigan, the county Road Commission said three plow trucks ran off the road and got stuck in the snow. In Albany, Oregon, a man in his late 50s died on his driveway and was covered in a layer of ice and snow, local law enforcement said.

In Greenwich, upstate New York, two boys were buried Tuesday in a snow fort they had been carving out when crews clearing sidewalks unknowingly dumped a load on them.

Joshua Demarest, 13, and Tyler Day, 12, were both alive when they were pulled from the snow, but Joshua was later pronounced dead at Saratoga Hospital, Cambridge-Greenwich Police Chief George Bell said.

"This is a true tragedy," he said