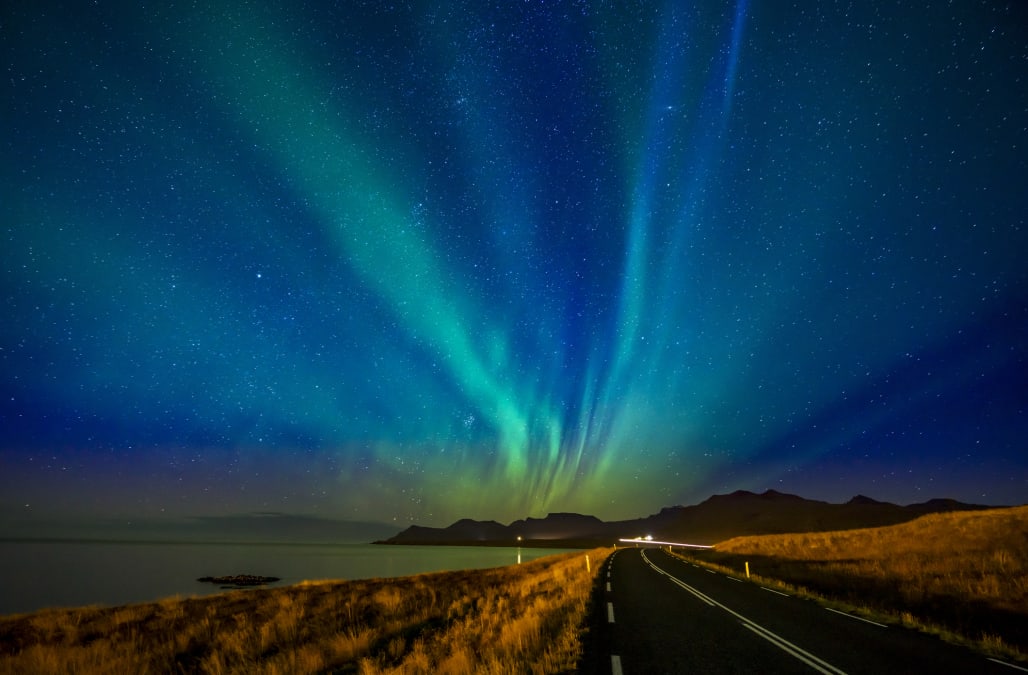 The northern lights are one of nature's most spectacular displays, but a change in solar activity may put viewing chances in jeopardy.

For those who wish to journey to a location where they can catch this phenomenon in person, the current solar cycle will make the lights appear less frequently.

A solar cycle can take 11 years. During this time, the circulation and flow inside the sun changes.

The least amount of solar activity, or when the fewest number of sunspots occur, takes place during solar minimum, which is where the cycle is currently headed. Sunspots are most numerous during solar maximum, and this part of the cycle is when auroras occur most frequently, according to NASA.

See more of the stunning phenomena:

General aurora borealis, auroras, Northern Lights
Photo workshop, learning how to photograph the Northern Lights in the arctic winter. Geothermal Hot spring area, Hverarond, Iceland
Person enjoying the Northern lights over geothermal hot spring area, Hverarond, Iceland
Northern Lights or Aurora Borealis, shining bright in the arctic winter, Iceland.
Canada, Nunavut, Territory, Aurora borealis glows in night sky above C-Dory expedition boat in Roes Welcome Sound in northern Hudson Bay
Person viewing the Northern lights over the lava landscape, Reykjanes Peninsula, Iceland
Colorful Auroras and Stars by the Fljotsdalur valley, Iceland
The Aurora Borealis bright up the sky at twilight on March 17, 2013 between the towns of Are and Ostersund, Sweden. AFP PHOTO/JONATHAN NACKSTRAND (Photo credit should read JONATHAN NACKSTRAND/AFP/Getty Images)
An Aurora borealis is pictured near the city of Tromsoe, northern Norway, late on January 24, 2012. AFP PHOTO / Scanpix / Rune Stoltz Bertinussen NORWAY OUT (Photo credit should read Rune Stoltz Bertinussen/AFP/Getty Images)
OSTBY, SWEDEN: A display of Aurora Borealis, northern lights, in Ostby, 19 August 2006. The northern lights occur in a circular band around the geomagnetic north pole, otherwise known as the northern lights oval. It is a result of the atmosphere shielding the earth against solar particles which would otherwise make the planet uninhabitable. On their way down towards the geomagnetic poles, the solar particles are stopped by Earth's atmosphere, which acts as an effective shield against these deadly particles. When the solar particles are stopped by the atmosphere, they collide with the atmospheric gases present, and the collision energy between the solar particle and the gas molecule is emitted as a photon - a light particle. And when you have many such collisions, you have an aurora - lights that may seem to move across the sky. AFP PHOTO / SVEN NACKSTRAND (Photo credit should read SVEN NACKSTRAND/AFP/Getty Images)
KANGERLUSSUAQ, GREENLAND - SEPTEMBER 02: (ISRAEL OUT) The Aurora Borealis glows over a lake September 02, 2007, near the Greenland town of Kangerlussuaq. The Northern Lights most often occurs from September to October and from March to April and are a popular tourist attraction. (Photo by Uriel Sinai/Getty Images)
The magnetic solar storm arranged a colourful show of aurora borealis in the night skies of Hyvinka in Southern Finland early morning, 31 October 2003. AFP PHOTO/LEHTIKUVA /PEKKA SAKKI / *** FINLAND OUT *** (Photo credit should read PEKKA SAKKI/AFP/Getty Images)
387304 01: UNDATED FILE PHOTO: Aurora Australis, the Southern Lights as seen from South Australia as with Aurora Borealis, are displayed during strong geomagnetic events. According to NASA March 29, 2001 the sun recently sent a powerful energy burst in the direction of Earth triggering dazzling aurora displays over nighttime skies on Friday and Saturday, NASA astronomers said. Directed toward Earth, such blasts can distort Earth's magnetic field, producing in extreme latitudes, colorful nocturnal sky displays known as auroras, or the Northern and Southern Lights. (Photo courtesy of NOAA/Newsmakers)
Up Next

"We are on track to reach solar minimum sometime between 2019 and 2022," Rodney Viereck, the head of research at the National Oceanic and Atmospheric Administration's Space Weather Prediction Center, said in an email to AccuWeather. "Then solar activity will slowly rise again."

However, despite the upcoming solar minimum, the lights can still be seen. Geomagnetic storms can develop during the minimum period but are more moderate in strength. During this time, the aurora is typically less bright, less active and becomes more localized.

Geomagnetic storms are rated on a scale from 1 (minor) to 5 (extreme). The more powerful a storm, the more widespread the aurora becomes as it extends towards the equator. The last storm of extended G5 strength occurred during October and November of 2003.

This last solar maximum was one of the smallest in the last 70 years, which resulted in fewer large geomagnetic storms. There were storms of G4 strengthas recently as March and June of 2015.

"We could still have a reasonably-sized storm during the last phase of the current solar cycle, but this is getting less and less likely," Viereck said.

During large events, auroras can be observed as far south as the United States, Europe and Asia. In 1859, a super solar flare developed and the northern lights were seen over tropical latitudes, including around Cuba and the Bahamas.

Until the cycle trends back toward solar maximum, those looking to view the northern lights in person aren't totally out of luck, it will just require a journey farther north or south.

"It will be a few years, maybe 2024 or 2025, before we will see the increase in geomagnetic activity of the next solar cycle," Viereck said. "Predicting solar activity is difficult, and we really don't yet know enough to provide more precise numbers on the timing an magnitude of the next cycle."