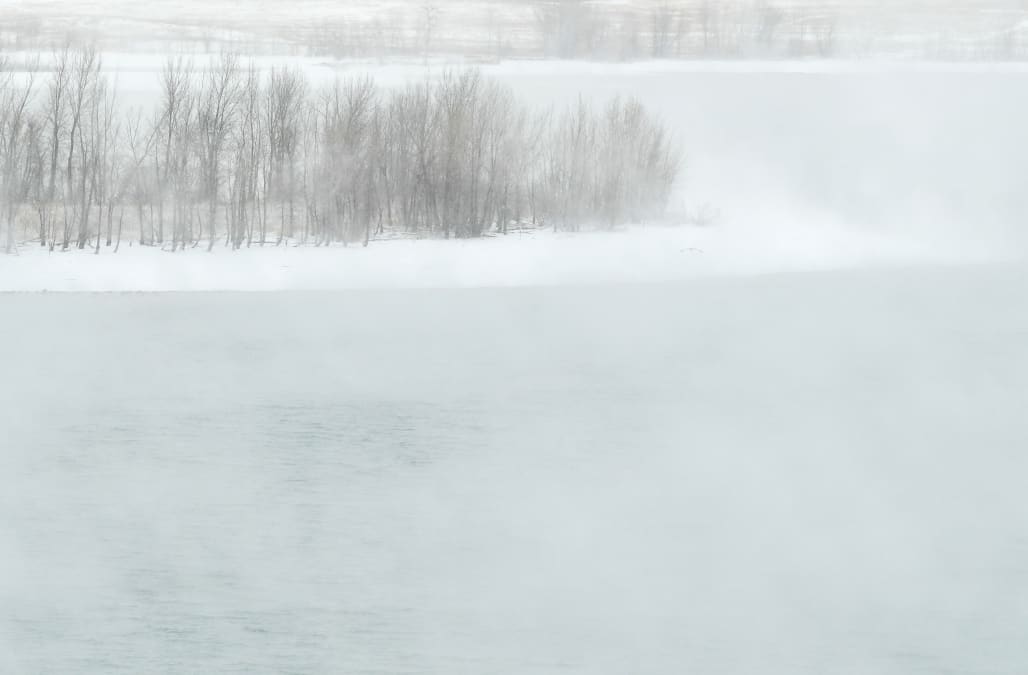 More than 1,500 flights were canceled at Chicago and Detroit airports Sunday as a winter storm swept through the Midwest on its way east, threatening to bring more snow to parts of Ohio that have seen nearly three feet.

Flight-tracking website FlightAware reported that 1,397 flights were canceled in Chicago's O'Hare and Midway airports — about half arrivals and half departures. By Sunday afternoon, 159 flights had been cancelled at Detroit Metropolitan Airport, FlightAware reported.

O'Hare recorded 3.9 inches of snowfall and Midway recorded 3.7 as of noon on Sunday, the National Weather Service in Chicago said.

The storm had dumped more than half a foot of snow on parts of Iowa, Michigan, Minnesota, South Dakota and Wisconsin by early Sunday afternoon, according to the Weather Channel.

People traveling across the Great Lakes and parts of the Midwest, and from Pennsylvania and up through Michigan and Chicago would be "dealing with periods of snow and probably some snow covered roads" in areas where it may be hard for crews to keep up, Giannasca said.

Chicago could see a total of 7 to 12 inches of snow, the National Weather Service said, and it and the region was under a winter storm warning through Sunday night. The city was bracing for plunging temperatures that are expected to send the thermometer to around 8 degrees next week.

"This is certainly going to be the coldest air this year," Weather Channel meteorologist Kelly Cass said.

A swath of the country from South Dakota to Vermont was under a winter weather advisory early Sunday, the weather service said.

The storm could bring up to 7 more inches of snow to the coast of Lake Erie in Ohio. In Kirtland, Ohio, east of Cleveland, nearly 33 inches of snow had fallen over the course of the storm as of Saturday morning, the weather service said.

"One of the best things I've experienced is Mexican Hot Cocoa.  Although I have fond memories of my midwestern cup of chocolate, this has it beat by a snow covered mile!" - Today's Nest

"This recipe adds a decadent component of elegance by incorporating lavender into your mug, which warms your senses as well as your taste buds." - Seasonally Jane

"Made with unsweetened almond milk and dark chocolate, spiced with warm aromatics, like cinnamon, nutmeg and cardamom, this lighter hot chocolate is ideal for treating yourself frequently all winter long." - Sweet and Savory

"I love Mexican hot chocolate, waaay more than regular. I mean… Of course I’ll drink and enjoy the occasional good ol’ hot chocolate. But if you ask me: “Do you want regular hot chocolate ooooor MEXICAN hot chocolate?”, I will definitely pick the latter." - Olivia's Cuisine

An additional 5 to 8 inches of snow was also expected in Detroit, the Weather Channel said, and close to five inches were forecast in Cleveland.

A plane slid off the runway at Detroit Metropolitan Airport Sunday at around 11:30 a.m., Delta Air Lines said in a statement. The flight landed and was turning from the runway onto the taxiway "when it left the pavement, stopping in the snowy grass," Delta said. No injuries were reported and the aircraft was towed to the maintenance hangar for inspection, the airline said.

A Federal Aviation Administration source told NBC News the incident looked like the result of "poor braking conditions," noting that the runway was wet and snowy.

Another batch of winter weather that hit the Pacific Northwest Thursday and Friday sent freezing rain into Portland, Oregon and caused power lines to go down all over the city.

The city's fire and rescue service said it responded to 378 emergencies into Friday evening, and on Saturday it rescued around 100 people trapped on a darkened train after a high voltage line was downed.

The Midwestern storm is forecast to continue spreading further east later Sunday, bringing snow and rain to the Northeast by Sunday night and into the Monday morning commute, the Weather Channel said.

Snow was expected to continue falling in the Northeast Monday through the evening. While New York City could get snow early Monday, it is more likely to turn into rain, forecasters said. Around 3 inches could fall north of the city, throughout Connecticut and in Boston by the time it's all over, forecasters said.

Philadelphia and Washington, D.C., were also expected to see rain into Monday morning.

Another round of snow was in store for the Pacific Northwest and the Plains this weekend. By Monday, snow totals will reach as much as 2 feet in some parts of Washington state, Oregon, Idaho, Montana, Colorado, Utah and Wyoming, The Weather Channel reported.

There was some good news for commuters for the rest of the week, Giannasca said.

"By tomorrow really the worst of the storm will be over, except for Maine," he said. "It'll be winding down everywhere else after the morning."

But the storm's departure was set to bring frigid temperatures afterward to the Midwest and Northeast by mid-week, according to the Weather Channel, with some areas featuring temperatures up to 30 degrees below average.