By Kristina Pydynowski for AccuWeather.com

Travelers in the central and northwestern United States will face the highest risk of delays during the heavily-traveled days leading up to Thanksgiving.

The busiest travel period of year will feature 48.7 million Americans traveling 50 miles or more from home Wednesday, Nov. 23 to Sunday, Nov. 27, according to projections from the American Automobile Association (AAA).

AAA estimates that more than 89 percent of travelers (43.5 million) will drive to their holiday destinations, while a total of 3.69 million are expected to fly.

Mother Nature threatens to put a wrench in some holiday travel plans in the days leading up to Thanksgiving, especially in the central and northwestern U.S.

RELATED: The 'Dos and Don'ts' of traveling with Thanksgiving leftovers

Gravy can't travel home with you.

Let's start with the main course: the turkey. The TSA says you can actually bring it along in your carry-on.

However, if your turkey is packed with ice in a cooler, that ice needs to be totally frozen when it's screened. If not, it's considered a liquid and won't be allowed.

If you're a fan of turducken -- a chicken stuffed in a duck wedged inside a turkey -- that's also allowed in a carry-on bag.

Any kind of pie can pass through TSA security checkpoints -- just know that some pies might need additional screening.

The TSA considers the instant potato flakes to be a solid, so that's okay to take on board.

However, already-made mashed potatoes needs to be packed in a checked bag because it's considered a gel.

Fruits and vegetables -- like squash, cranberries and green beans -- are only allowed in carry-on luggage if they're in solid form.

However, if you get them in a can that's larger than 3.4 ounces, you better put it in your checked bag or ship it.

Storm threatens to cause delays across central US

Monday will feature the best day for pre-Thanksgiving Day travel across the central U.S. prior to a storm arriving on Tuesday and Wednesday.

The upcoming storm will not be as potent as the recent blizzard. However, there can still be enough wintry and wet weather to cause travel slowdowns on highways and at airports. 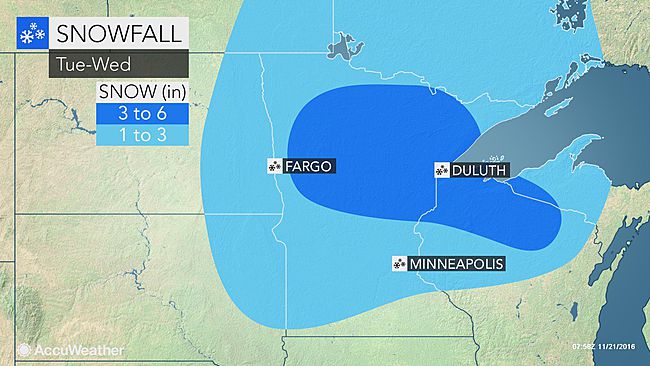 "Rain will fall from Nebraska and Iowa to northeastern Texas," AccuWeather Meteorologist Steve Travis said, "while periods of snow will fall across western Nebraska into the Dakotas and western Minnesota."

The snow will gradually depart Wyoming and the Colorado Rockies during the day and will also develop across northern Wisconsin.

A few inches of snow are likely to accumulate, leading to portions of interstates 29, 35, 80, 90 and 94 becoming slippery or slushy.

More from AccuWeather.com:
Check AccuWeather MinuteCast® for your location
Pacific storms to soak Washington to California, Arizona into next week
New: AccuWeather Ready!

Enough cold air will be in place for the storm to bring a wintry mix and icy spots in the Upper Midwest, including around Minneapolis. 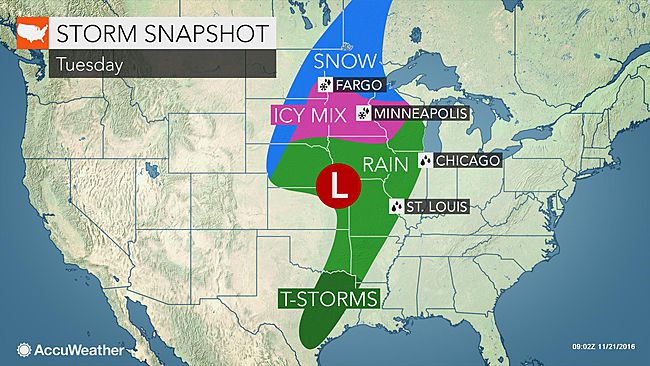 A mixture of rain and wet snow will gradually diminish around Denver during the day, but gusty winds whipping all of the central High Plains could allow flight delays to persist into the afternoon.

"On Wednesday, this storm will bring rain to the Great Lakes," Travis said. "This includes Chicago, which may cause travel headaches." 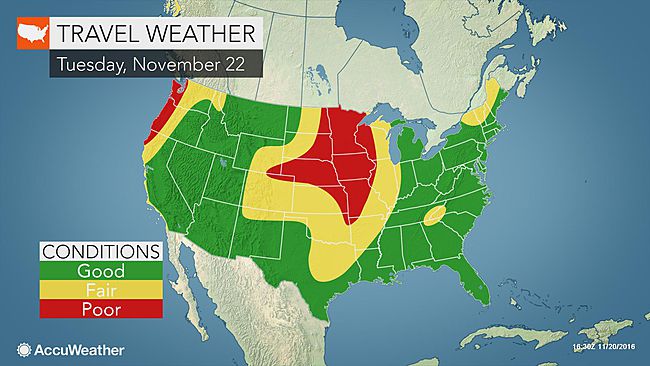 Enough cold air will be in place for snow from Minnesota to the Upper Peninsula of Michigan, while rain and thunderstorms stretch from Nashville to Houston.

A few of the thunderstorms could turn severe with locally damaging winds, heavy downpours and frequent lightning being the primary threats.

As the storm tracks eastward, sunshine and calmer conditions will return to the High Plains for Wednesday's busy travel day.

The storm set to target the central U.S. on Tuesday and Wednesday will first focus on the Four Corners region with rain and gusty winds on Monday.

Rain and mountain snow showers will lightly dot the Northwest and cause minor inconveniences for early holiday travelers. However, more travel woes may arise on Tuesday and Wednesday.

Soaking rain will first target the I-5 corridor on Tuesday before periods of rain and mountain snow spread to Idaho and central California on Wednesday.

From Seattle to Portland to Medford, Oregon, the afternoon and evening hours of Tuesday will bring the heaviest rain and highest concerns for flight delays, wet roads and reduced visibility.

Snow levels will fall to pass level, creating slick conditions for a time on I-90's Snoqualmie Pass and I-80's Donner Pass. The worst conditions for the latter will likely be on Wednesday morning.

The storm will not drop farther south into the Southwest, allowing sunshine and calm conditions to dominate Los Angeles, Las Vegas and Phoenix on Tuesday and Wednesday.

The Northwest will continue to face a parade of storms through the long Thanksgiving holiday weekend.

Northeastern US weather to improve for pre-Thanksgiving Day travel

Snow showers from this weekend will continue to stream across the Northeast's interior on Monday. Blustery winds will tug on vehicles and could lead to flight delays throughout the entire region.

"The lake-effect snow across western and central New York could make for tricky travel on I-90 on Monday," Travis said.

As the storm delivering the taste of winter gradually departs, conditions will improve for travelers as the busiest travel day arrives.

The snow showers and gusty winds will ease from west to east Tuesday into Wednesday.

On Wednesday, the main issue for travelers along the I-95 corridor from Portland, Maine, to Boston to New York City to Washington, D.C., will be sun glare.

Some clouds will begin to filter into the Northeast on Wednesday ahead of an approaching storm.

Light showers streaking out ahead of the storm will reach Pittsburgh and Buffalo, New York, on Wednesday afternoon. More of the Northeast will experience another bout of rain and interior snow on Thanksgiving Day. There is the possibility of ice at the onset of the storm across parts of northern Pennsylvania and New York, which could lead to slippery travel on Wednesday night into Thursday morning.

Dry weather will also span most of the Southeast in the days leading up to Thanksgiving, resulting in an extended stretch of good traveling conditions.