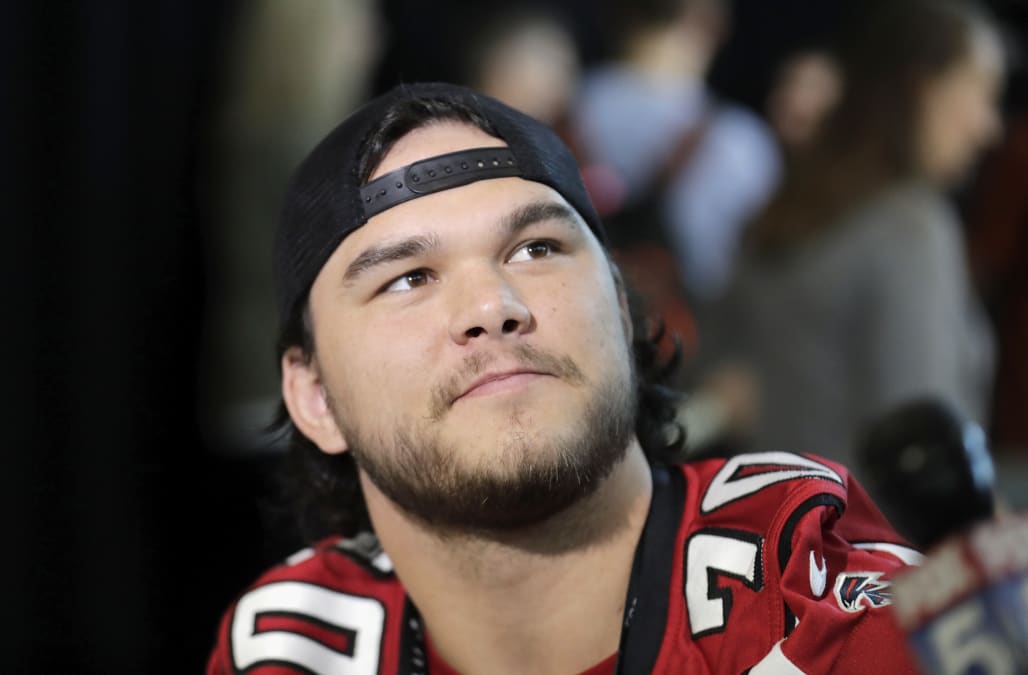 HOUSTON (Reuters) - Riding a fast track to the NFL's showcase game, Atlanta Falcons tackle Jake Matthews is proud to be representing his storied family in Sunday's Super Bowl in his hometown of Houston.

He is the son of Pro Football Hall of Famer Bruce Matthews, nephew of former Pro Bowler Clay Matthews Jr., and cousin to current Green Bay Packers standout linebacker Clay Matthews III among other family members who have made it to the NFL.

SEE ALSO: Falcons use table tennis to stay loose ahead of Super Bowl

"I take a ton of pride in it. Playing on the peewee team, 'Oh hey, that's (Bruce) Matthews' kid, we have to expect a little more from him,'" the Falcons player told reporters on Tuesday at the Memorial City Mall ice rink that was melted down to accommodate the media event.

"I love the respect that comes with it. At the same time, it's a lot to live up to. We've always tried to do things the right way and try hard at what we do. I'm just following my dad's lead on that."

Matthews joined Atlanta as the sixth overall pick in the 2014 NFL Draft out of Texas A&M and became an instant starter.

Three seasons later he is taking in the rarified air of the Super Bowl in a familiar setting.

"We drive around on the bus and I recognize everything. It's exciting and I get to do it in my hometown with my family."

Matthews and his linemates have played a big part in Atlanta's top-ranked offense, opening holes for the running backs and protecting quarterback Matt Ryan.

"He's such a good player, he's the MVP (of the league), no question in my mind. I take a lot of pride in blocking for him," Matthews said.

The tackle gave a lot of credit to center Alex Mack, who joined Atlanta this year after seven seasons with the Cleveland Browns.

"One of the biggest things he brings is the level of how we prepare for defenses," Matthews said. "I've never been around a guy who asks as many questions as he does.

"Nobody breaks down fronts and schemes and blitzes better than he does and it's really rubbed off on the rest of us. We all feel real confident going into games."

Matthews can hardly wait for the next test.

"Feeling humble, blessed in the moment and confident, too. Ready to get after it," he said. "I can't wait for the first snap."