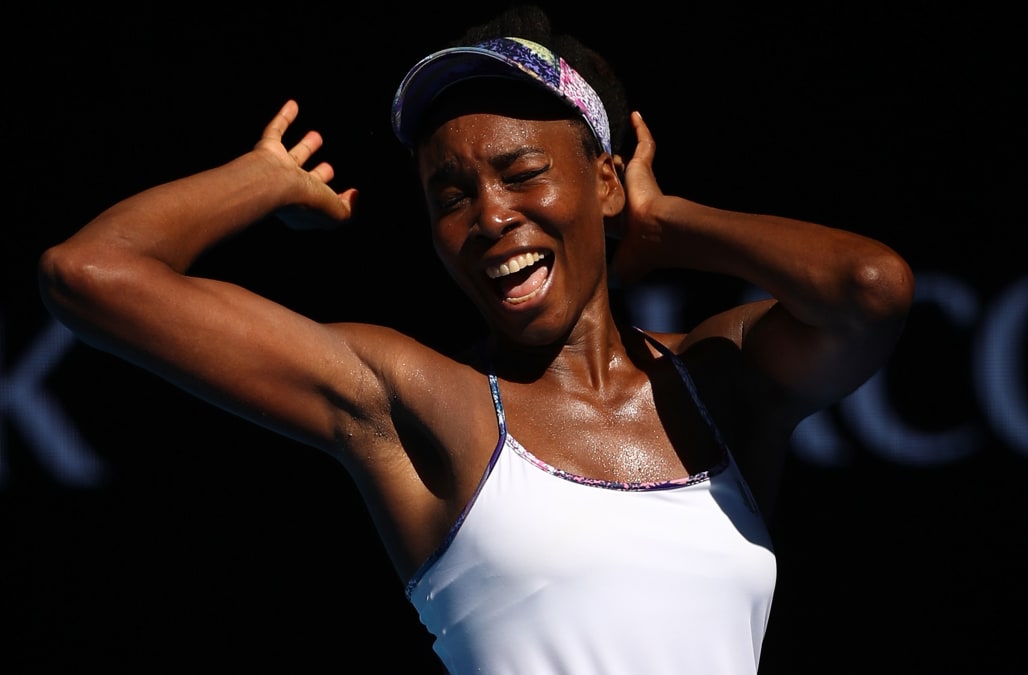 For the first time since 2009, Venus Williams is into the final of a Grand Slam tournament. Only fittingly, she now has to play her sister.

On Wednesday night in Melbourne, in the first of the two women's semifinals at the Australian Open, Venus rallied to beat the young American CoCo Vandeweghe in three sets, 6-7 (3), 6-2, 6-3. It was one of the best matches of the tournament, two of the more powerful players on tour trading massive groundstrokes and arguably bigger serves.

Vandeweghe, just 25, had rolled through the reigning Australian and French Open champions en route to her first career Grand Slam semifinal, but Venus pulled it out.

Here, for your viewing pleasure, is her celebration:

And one more for good measure:

As ESPN noted, it is almost hard to remember now that just six years ago, Venus was diagnosed with Sjogren's syndrome, an autoimmune disease that severely truncated her ability to train. As Serena continued to stake her claim as one of the sport's best ever, for a long time it looked like Venus might bow out of tennis altogether.

And now in 2017, with the win, Venus becomes the oldest woman to ever reach an Australian Open final.

"Oh, my gosh, it means so much, mostly because she played so well," Venus said afterward, praising Vandeweghe. "That moment was just joy. It was a heartfelt match. If the match is 6-2, 6-2, you know, the moment is kind of clear that it's going to happen. But she played so well. There was never a moment where she wasn't just hitting the ball amazing and striking the ball with just such precision."

At her press conference, Venus closed with a wish.

"I would give anything," she said, "to see [Serena] across the net from me on Saturday."

Serena, in a cool 50 minutes, made sure that happened.

"A total inspiration," Serena said after her 6-2, 6-3 semifinal victory over Mirjana Lucic-Baroni. "My big sister, she's basically my world and my life. I was so happy for her, really."

"For us both to be in the final is the biggest dream come true for us."

For Serena, a win on Saturday would give her 23 Grand Slam titles, the most ever in the Open era. (She is currently tied with Steffi Graf.) Venus, meanwhile, is in search of her eighth.

To put it another way, regardless of which sister wins on Saturday, the Williams sisters will earn their 30th grand slam title.

Here's how they stack up head-to-head in grand slam finals:

SEE ALSO: The sports world has been roasting the Trump administration over the 'alternative facts' comment