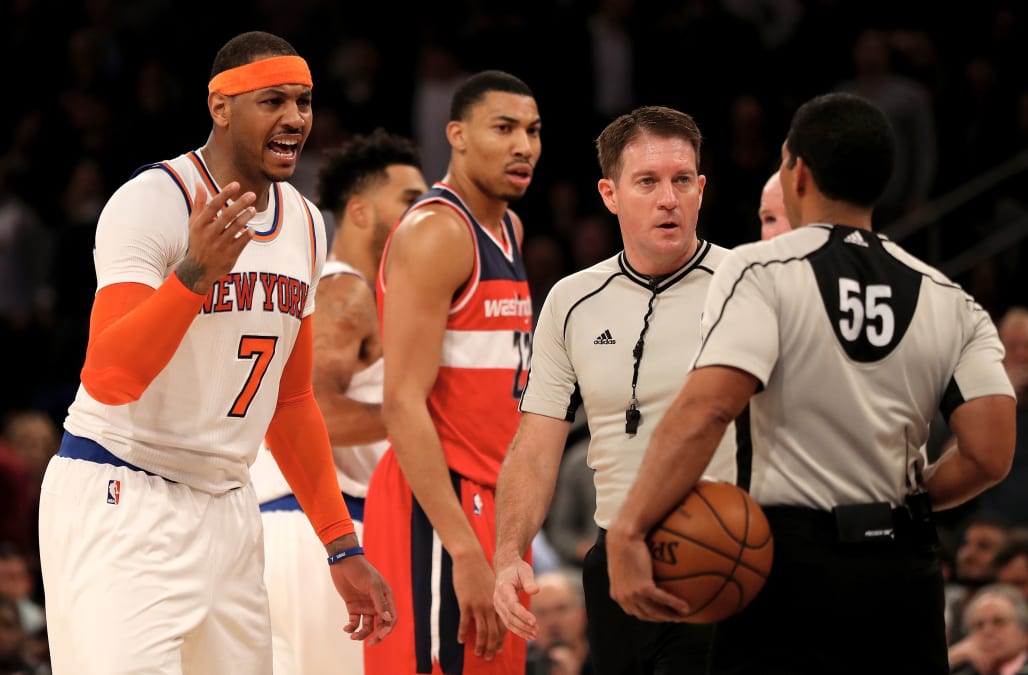 The New York Knicks lost again on Thursday night, this time in particularly dysfunctional fashion when they failed to get off a shot at the buzzer because, according to the Knicks, an assistant coach on the Washington Wizards tricked them.

After trailing by as many as 15 earlier in the game, the Knicks mounted a nice comeback down the stretch to get within one in the final minute. An electric John Wall dunk put the visitors up 113-110 with 13 seconds left, so the Knicks called timeout to advance the ball up the court.

And here's where things go off the rails.

Carmelo Anthony gets the ball with 13 seconds left, and the other Knicks players clear out around the three-point line. Rather than dribbling and pulling up, as one might invariably expect Anthony to, he drives and kicks to an open Courtney Lee.

But Lee, a good three-point shooter, inexplicably passes up the three and instead drives into the lane. The clock is winding down now and he has to heave a pass to Brandon Jennings, who can't get a shot off at the buzzer. Game over, Knicks loss.

After the game, though, Lee said that he passed up the open look because Wizards assistant coach Sidney Lowe, standing behind him, yelled in his ear and confused him. This made Lee believe there were two Washington defenders pursuing him. Not wanting to get blocked, Lee didn't shoot it.

"He was right next to me and he was screaming, 'I'm right here, I got your help. My stunt, my stunt,'" Lee said. "So I'm thinking it's a player because it's happening so fast."

Lee then said he had plenty of time to get off a shot before his defender, Kelly Oubre, closed in on him. He didn't shoot it because of Lowe's confusing shouts.

"I definitely did," Lee said. "Not hearing that voice and thinking it was a player, I definitely had enough time to shoot."

Lee didn't know if Lowe did it on purpose, but wondered whether the NBA should look into it.

"I can't say if he did it on purpose or not. I've never been in that situation and I've never seen it before," Lee said. "I think it's something they need to take a look at. Being a basketball player, you play off instincts, and if you hear somebody right there, that's why I tried to make the right play, but I still should have shot it."

Courtney Lee says a sly tactic from a Wizards assistant coach tricked him into thinking he had help on the last possession. pic.twitter.com/UhwGIT9JQK

According to the NBA rule book, the refs should give a technical foul if a coach steps on the court during the run of play.

With the loss, the Knicks dropped to 19-25 on the season. They've been terrible recently, and this is certainly a new way to lose one.