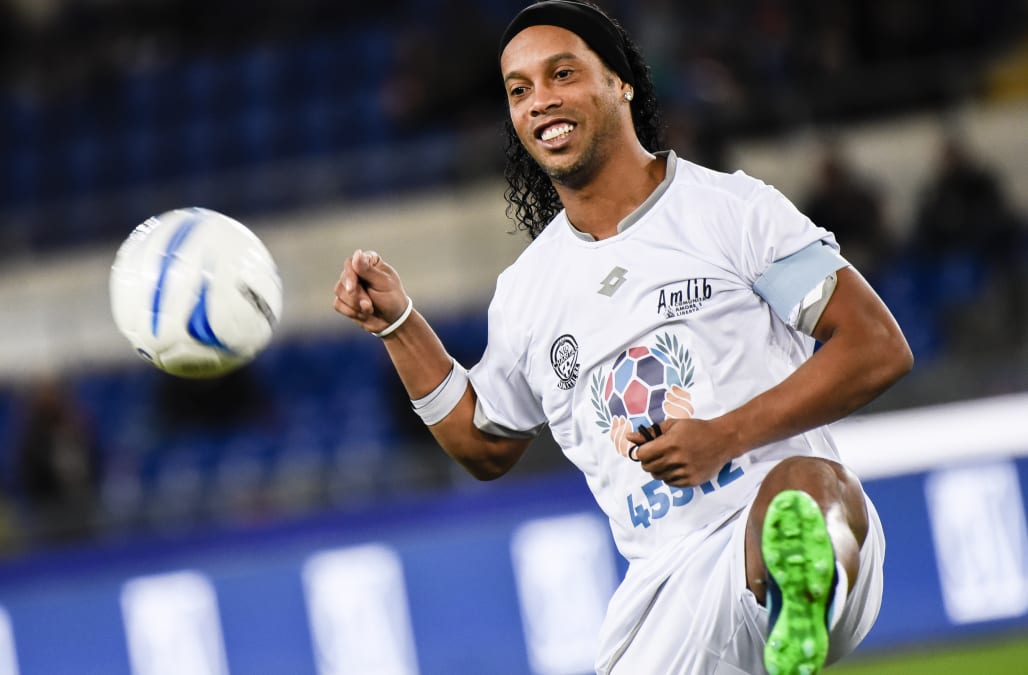 Brazilian soccer legend Ronaldinho penned a "Letter To My Younger Self" for Derek Jeter's "The Players' Tribune" and told a fantastic story about playing soccer as a child with his dog, Bombom.

The letter is a look back at Ronaldinho's storied career which included winning the World Cup in 2002 and winning the Ballon d'Or in 2005 as the world's top footballer.

He also writes about growing up in a rough section of Porto Alegre in Brazil. It was there that Ronaldinho first began to hone his skills and that his dog had a lot to do with it.

You see, people get tired, but according to Ronaldinho, Bombom was "a tireless defender."

"Where you live in Porto Alegre, there are drugs and gangs and that kind of stuff around. It's going to be tough, but as long as you are playing football -- on the street, at the park, with your dog -- you will feel safe. Yes, I said your dog, by the way. He's a tireless defender. You'll play with [your older brother] Roberto. You'll play with other kids and older guys at the park. But eventually everyone will get tired -- and you will want to keep playing. So make sure you always take your dog, Bombom, out with you. Bombom is a mutt. A real Brazilian dog. And even Brazilian dogs love football. He'll be great practice for dribbling and skills ... and maybe the first casualty of the "Elastico." Years from now, when you are playing in Europe, a few defenders will remind you of Bombom." Ronaldinho, Soccer legend

For those not familiar, the "elastico" — which is also called the "flip flap" — refers to Ronaldinho's signature dribbling move in which he would fake one way and then pull the ball back as if it were attached to a rubber band. By the time the defender knew what happened, Ronaldinho was gone in the other direction.

NOW WATCH: Here's a simple no-weights workout that could lead to real results

Related: Look back at the best photos from the week in sports:

Sports photos of the week: 12/30 - 1/6
SOUTH BEND, IN - JANUARY 04: Matt Farrell #5 of the Notre Dame Fighting Irish shoots the ball as Anas Mahmoud #14 of the Louisville Cardinals defends over the top at Purcell Pavilion on January 4, 2017 in South Bend, Indiana. (Photo by Michael Hickey/Getty Images)
DETROIT, MI - JANUARY 1: Geronimo Allison #81 of the Green Bay Packers celebrates his touchdown catch with teammate Jared Cook #89 against the Detroit Lions during fourth quarter at Ford Field on January 1, 2017 in Detroit, Michigan (Photo by Gregory Shamus/Getty Images)
AUCKLAND, NEW ZEALAND - JANUARY 03: Serena Williams of USA serves during her match against Pauline Parmentier of France on day two of the ASB Classic on January 3, 2017 in Auckland, New Zealand. (Photo by Hannah Johnston/Getty Images)
LAHAINA, HI - JANUARY 05: Jason Dufner of the United States plays his shot from the first tee during the first round of the SBS Tournament of Champions at the Plantation Course at Kapalua Golf Club on January 5, 2017 in Lahaina, Hawaii. (Photo by Cliff Hawkins/Getty Images)
TOPSHOT - Ukraine's Kateryna Bondarenko serves against Roberta Vinci of Italy in the women's first round at the Brisbane International tennis tournament in Brisbane on January 2, 2017. / AFP / SAEED KHAN / --IMAGE RESTRICTED TO EDITORIAL USE - STRICTLY NO COMMERCIAL USE-- (Photo credit should read SAEED KHAN/AFP/Getty Images)
MEMPHIS, TN - DECEMBER 29: Seconds before being ejected from the game, Russell Westbrook #0 of the Oklahoma City Thunder questions official Brian Forte #45 about a call during the second half of a game against the Memphis Grizzlies at FedExForum on December 29, 2016 in Memphis, Tennessee. (Photo by Frederick Breedon/Getty Images)
Football Soccer - Real Madrid v Sevilla in King's Cup soccer match- Santiago Bernabeu stadium, Madrid, Spain - 4/1/17 Real Madrid's James Rodriguez and Sevilla's Vitolo in action. REUTERS/Juan Medina TPX IMAGES OF THE DAY
BRISBANE, AUSTRALIA - JANUARY 03: Rafael Nadal of Spain plays a forehand in his match against Alexandr Dolgopolov of Ukraine on day three of the 2017 Brisbane International at Pat Rafter Arena on January 3, 2017 in Brisbane, Australia. (Photo by Chris Hyde/Getty Images)
ARLINGTON, TX - JANUARY 02: Troy Fumagalli #81 of the Wisconsin Badgers dives for the ball in the first quarter during the 81st Goodyear Cotton Bowl Classic between Western Michigan and Wisconsin at AT&T Stadium on January 2, 2017 in Arlington, Texas. (Photo by Tom Pennington/Getty Images)
PERTH, AUSTRALIA - JANUARY 06: (EDITORS NOTE: Image has been rotated.) Heather Watson of Great Britain serves to Andrea Petkovic of Germany in the women's singles match during day six of the 2017 Hopman Cup at Perth Arena on January 6, 2017 in Perth, Australia. (Photo by Paul Kane/Getty Images)
TOKYO, JAPAN - JANUARY 03: Kobey Cameron #3 of the Frontiers celebrates with meate mates after winning the Rice Bowl match between Fujitsu Frontiers and Kwansei Gakuin University Fighters at Tokyo Dome on January 3, 2017 in Tokyo, Japan. (Photo by Matt Roberts/Getty Images)
ISTANBUL, TURKEY - JANUARY 05: Bryant Dunston, #42 of Anadolu Efes Istanbul competes with Alex Tyus, #7 of Galatasaray Odeabank Istanbul during the 2016/2017 Turkish Airlines EuroLeague Regular Season Round 16 game between Anadolu Efes Istanbul v Galatasaray Odeabank Istanbul at Abdi Ipekci Arena on January 5, 2017 in Istanbul, Turkey. (Photo by Aykut Akici/EB via Getty Images)
NASHVILLE, TN - JANUARY 01: DaQuan Jones #90 of the Tennessee Titans hands a game ball to a young fan after scoring a touchdown against the Houston Texans during the first half at Nissan Stadium on January 1, 2017 in Nashville, Tennessee. (Photo by Frederick Breedon/Getty Images)
INNSBRUCK, AUSTRIA - JANUARY 04: Domen Prevc of Slovenia soars through the air during his first competition jump on Day 2 on January 4, 2017 in Innsbruck, Austria. (Photo by Adam Pretty/Bongarts/Getty Images)
ATLANTA, GA - JANUARY 01: B.W. Webb #28 of the New Orleans Saints breaks up a pass intended for Julio Jones #11 of the Atlanta Falcons during the second half at the Georgia Dome on January 1, 2017 in Atlanta, Georgia. (Photo by Kevin C. Cox/Getty Images)
Dec 30, 2016; Miami Gardens, FL, USA; Florida State Seminoles quarterback Deondre Francois (12) celebrates after scoring a touchdown in the fourth quarter against the Michigan Wolverines at Hard Rock Stadium. Mandatory Credit: Logan Bowles-USA TODAY Sports TPX IMAGES OF THE DAY
ADELAIDE, AUSTRALIA - JANUARY 03: Ellyse Perry of the Sixers bats during the WBBL match between the Strikers and Sixers at the Adelaide Oval on January 3, 2017 in Adelaide, Australia. (Photo by Daniel Kalisz/Getty Images)
BOSTON, MA - JANUARY 05: The number 15 of Milt Schmidt, the Boston Bruins Hall of Fame center who died at age 98 yesterday, is displayed at TD Garden before a game with Edmonton Oilers on January 5, 2017 in Boston, Massachusetts.Schmidt lead the Bruins to two Stanley Cup championships as a player. (Photo by Jim Rogash/Getty Images)
ST. LOUIS, MO - JANUARY 2: A general view during the National Anthem prior to the start of the 2017 Bridgestone NHL Winter Classic between the St. Louis Blues and the Chicago Blackhawks at Busch Stadium on January 2, 2017 in St. Louis, Missouri. (Photo by Scott Kane/Getty Images)
OBERSTDORF, GERMANY - DECEMBER 30: Ryoyu Kobayashi of Japan soars through the air during his first competition jump on Day 2 of the 65th Four Hills Tournament ski jumping event on December 30, 2016 in Oberstdorf, Germany. (Photo by Adam Pretty/Bongarts/Getty Images)
Britain Football Soccer - AFC Bournemouth v Arsenal - Premier League - Vitality Stadium - 3/1/17 Arsenal's Alexis Sanchez looks dejected Reuters / Dylan Martinez Livepic EDITORIAL USE ONLY. No use with unauthorized audio, video, data, fixture lists, club/league logos or "live" services. Online in-match use limited to 45 images, no video emulation. No use in betting, games or single club/league/player publications. Please contact your account representative for further details. TPX IMAGES OF THE DAY
ARLINGTON, TX - JANUARY 02: Alec James #57 of the Wisconsin Badgers celebrates after the Wisconsin Badgers beat the Western Michigan Broncos 24-16 in the 81st Goodyear Cotton Bowl Classic at AT&T Stadium on January 2, 2017 in Arlington, Texas. (Photo by Tom Pennington/Getty Images)
MONTREAL, QC - JANUARY 05: Team United States celebrate as they win gold against Team Canada during the 2017 IIHF World Junior Championship gold medal game at the Bell Centre on January 5, 2017 in Montreal, Quebec, Canada. Team United States defeats Team Canada 5-4 in a shootout and wins the gold medal round. (Photo by Minas Panagiotakis/Getty Images)
Up Next

SEE ALSO: NFL MOCK DRAFT: Here's what the experts are predicting for all 32 first-round picks