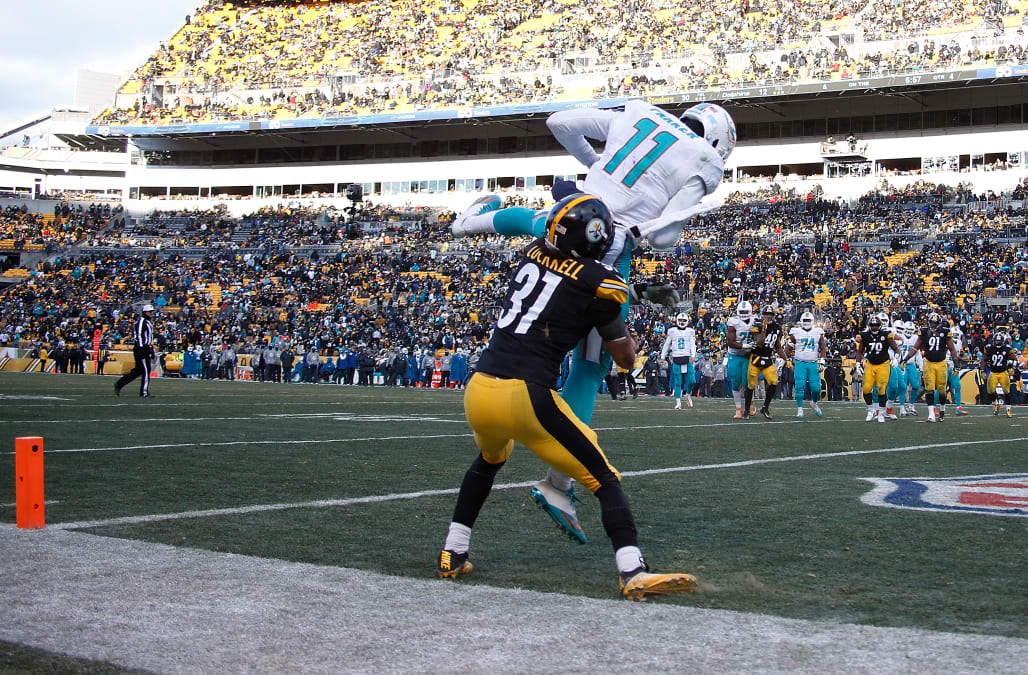 The Pittsburgh Steelers' dynamic B-team offensive trio of Ben Roethlisberger, Antonio Brown and Le'Veon Bell, a bitterly cold winter day and non-stop pressure by the blitzing defense created a 30-12 AFC playoff game home rout of the Miami Dolphins on Sunday that wasn't even that close.

"The defense played great, and we went out to control the ball and score some touchdowns," Bell said after the Steelers coasted into next Sunday's AFC divisional game at Kansas City.

The third-seeded Steelers did all that and more in winning an NFL-best eighth in a row, one more than the top-seeded New England Patriots, who appear to be Pittsburgh's biggest roadblock to playing in a ninth Super Bowl.

"We had a lot of significant contributions. We had the big three running on offense and the defense stopped the run," Steelers coach Mike Tomlin said.

Bell ran for two touchdowns and a team playoff record 167 yards, Brown caught two first-quarter touchdown passes of at least 50 yards and the Steelers' pressure defense forced three turnovers. And Roethlisberger was nearly flawless in running the offense, which ran up 219 yards in the first quarter alone.

The Steelers quickly built a 20-3 lead less than 18 minutes into the game and went on to only their second playoff win since last appearing in the Super Bowl during the 2010 season.

Roethlisberger apparently injured an ankle on the next to last play of the game. Big Ben doesn't know the severity, but he was spotted in a walking boot on his right foot after the game.

"We will find out soon, hopefully," Roethlisberger said. "You're always worried about being hurt, but I'll be out there next week."

With backup quarterback Matt Moore pressured constantly while losing two fumbles and throwing an interception during a mid-game span of only three series, the mistake-ridden Dolphins didn't come close to replicating their 30-15 win over the Steelers on Oct. 16, which started Pittsburgh on a four-game losing streak.

Jay Ajayi, who ran for 204 yards and two touchdowns in that game, was held to 33 yards on 16 carries and wasn't a factor.

Especially for Moore, who was knocked out of the game for one play after taking a hard hit from linebacker Bud Dupree along the sideline while throwing a pass, then returned to turn the ball over on three consecutive possessions.

The weather -- the game-time temperature was 17 degrees Fahrenheit (minus 8 Celsius) -- no doubt was a factor, as attested by line judge Carl Johnson's frozen whistle.

The Dolphins, who practiced all week in the warmth of south Florida for their first playoff game since 2008, huddled around sideline heaters all afternoon in a failed attempt to warm up an offense that never got going as chilly winds blew off the adjacent three rivers and into a frigid Heinz Field.