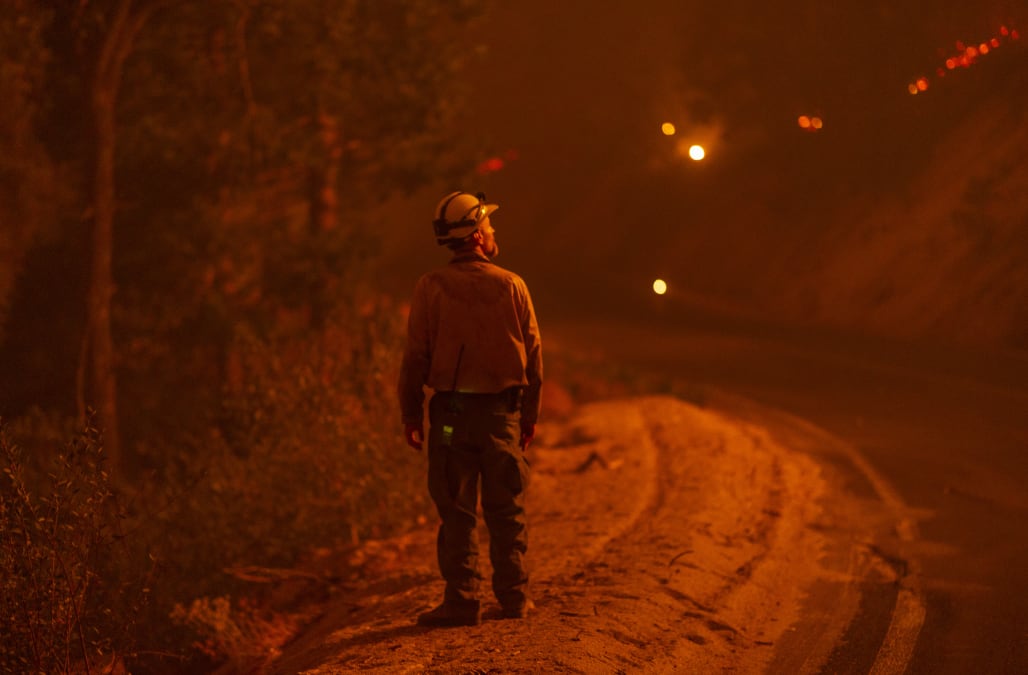 SAN FRANCISCO — For weeks, residents up and down the West Coast have been checking forecasts to find out when the suffocating, hazardous wildfire smoke will shift and allow them to once again open their doors and windows.

“It’s been relentless. For the past three weeks there hasn’t been a day when that hasn’t been our primary concern,” Cristina Mueller, a freelance writer in Oakland, told Yahoo News.

The mother of two daughters, ages 3 and 7, Mueller said the first thing she does in the morning, and the last thing before she goes to bed, is check a variety of websites for the current air quality index, the Environmental Protection Agency’s scale that measures the concentration of pollutants in the air.

“Three years ago I didn’t even know what AQI was, and now it dominates everything we do,” Mueller said. “We can’t go outside. Since COVID, I feel like walks were the only thing that we had left, and now this is taking away walks.”

Late last week, models predicted that a break in the unrelentingly sooty air would finally arrive on Monday across much of California, Oregon and Washington. But as the day broke and revealed a now familiar mix of smoky haze and low visibility, websites of agencies like Northern California’s Bay Area Air Quality Management District confirmed the bad news: The air for millions of people still ranged from “unhealthy” to “hazardous.”

The time of the expected improvement has been pushed back to the end of this week.

For people living in areas where wildfire smoke has become a daily occurrence, the health threat is serious.

“The biggest health threat from smoke is from fine particles,” the Environmental Protection Agency says on its website. “These microscopic particles can penetrate deep into your lungs. They can cause a range of health problems, from burning eyes and a runny nose to aggravated chronic heart and lung diseases. Exposure to particle pollution is even linked to premature death.”

That helps explain why people like Mueller have been glued to air quality websites and the predictions of when things might get better. Smoke forecasting, it turns out, is tricky business. Variables like barometric pressure, temperature, moisture, wind speed, terrain and altitude all factor in to the modeling, Ranil Dhammapala, an atmospheric scientist with the Washington State Department of Ecology, told the Seattle Times. And, like weather forecasting, predicting how long wildfire smoke will linger is subject to interpretation.

The models “didn’t take into account a reduced amount of heating at the surface and painted an overly optimistic picture of the clearing,” Dhammapala told the Times.

While air quality remained dismal over much of Washington and Oregon on Tuesday, conditions improved slightly in the Bay Area, falling to the “moderate” level (pollution concentrations measured between 50 and 100 on a scale of 0 to 500) in San Francisco, Oakland and Marin County for the first time in days. Scattered rain began to fall in the Pacific Northwest, though not enough to extinguish the fires still raging there.

In Portland, the smoke was still so thick that some airlines canceled flights Tuesday in and out of the city until at least 3 p.m., when winds were expected to pick up.

Sarah Gibbs, a graduate student at Antioch University who who lives with her three children in Newcastle, a suburb of Seattle, posted a photo on Facebook on Tuesday after the city registered an AQI reading of 269.

“The number is worse,” Gibbs, who says she checks the EPA’s air quality app on her phone roughly 10 times a day, told Yahoo News. “I actually thought it might have been getting better because for a brief period of time I could see some definition of high clouds through the smoke, but, oddly, the number I saw did not indicate it was better. I’ve seen the worst number yet today.”

The sheer volume of the smoke generated by 24 active fires in California, 14 in Oregon and another 15 in Washington has shown few signs of abating since last week, and the long-awaited change in the winds has meant that the mass of smoke hovering over the West Coast is now heading east across the country.

The joint NASA & @NOAA Suomi NPP satellite continues to monitor wildfires in the western United States. New images show the winds have changed again, with smoke and small particles suspended in the air (aerosols) moving across the continental U.S.: https://t.co/tlMce2rxITpic.twitter.com/EmISBArc4F

Parts of Idaho and Montana have been blanketed by “hazardous” levels of smoke in recent days. Satellite imagery on Monday showed it stretching from California up through Arizona, New Mexico, Texas, Oklahoma, Missouri, Illinois and Michigan. By Tuesday it had reached the East Coast, the National Weather Service said.

“It looks like the smoke, depending on what’s happening with the winds, could be reaching anywhere from the Carolinas to the Northeastern part of the country,” National Weather Service meteorologist Julie Malingowski told the San Francisco Chronicle. “It’s hard to tell exactly.”

Far less dense than what is being experienced on the West Coast, the smoke that has drifted into the skies over places like New York and Washington, D.C., appears more like clouds or haze. Relatively speaking, it’s nothing compared with what people are enduring out west.

“We’ve been housebound since Friday. Everything that we had been doing was outdoors because of coronavirus, so now those small pleasures have been taken from us as well,” Gibbs said. “I can feel my nostrils gently burning. I’ve got a headache, my daughter’s complaining of a headache. You feel it pretty quickly when you go outside.”