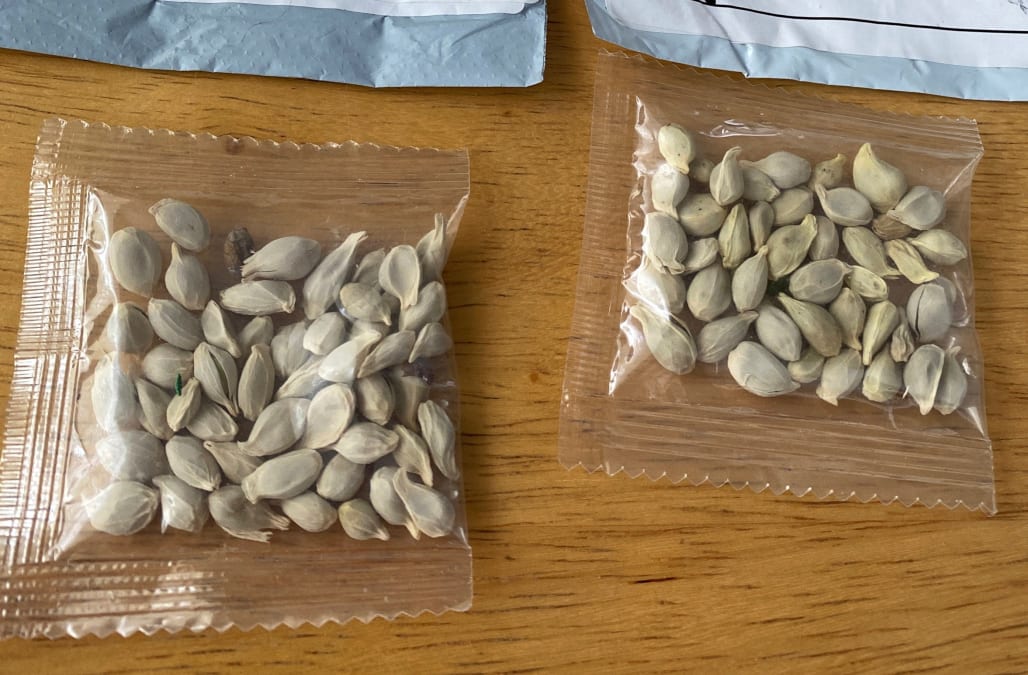 CHICAGO, July 31 (Reuters) - The U.S. Agriculture Department has identified more than a dozen plant species ranging from morning glories to mustard in bags of unsolicited seeds arriving in the mailboxes of thousands of Americans, mostly postmarked from China.

While most species identified seem to be innocuous herbs, flowering plants, vegetables or grasses, plant experts warn that seeds from other parts of the world could be non-native varieties that harm commodity crops.

Another concern is what appears to be an unknown coating, possibly insecticide or fungicide on the seeds, said Robin Pruisner, state seed control official at the Department of Agriculture and Land Stewardship in Iowa, the top U.S. corn growing state.

"I've had people describe to me that the seeds are coated with something purple. I haven't had it in my hands yet, but it sounds an awful lot like a seed treatment," she said.

Pruisner said she had received 297 reports of seeds received as of Thursday afternoon.

The U.S. Department of Agriculture’s Animal and Plant Health Inspection Service (APHIS) is instructing state agencies to collect the seeds and send them to it for analysis. The agency on Wednesday said it had identified 14 different species of seeds, but noted it was still early in the process.

The Agriculture Department has said the packages are most likely part of a "brushing" scam, in which people receive unsolicited items from a seller who then posts false positive customer reviews to boost sales.

U.S. Customs and Border Protection is also investigating the origin of the seeds. China's foreign ministry spokesman has said the packages appear to have been falsified.

Invasive species in the United States

Where it is found: All 50 states

How/when it was introduced: 1890, brought to U.S. by man who wanted to populate America with all birds mentioned in Shakespearean literature.

Where it is found: Most states east of Colorado and Washington, Oregon and Hawaii

How/when it was introduced: Late 1800s, meant for decoration and erosion control

Where it is found: Potomac River, New York City

How/when it was introduced: 2002, release from fish markets

Damage it causes: Preys on and crowds out native species

Where it is found: Great lakes, Midwestern bodies of water

How/when it was introduced: 1988,  water emptied from ships

Where it is found: Florida

Where it is found: 48 states, not found in North Dakota or Florida

How/when it was introduced: 1700s, introduced as ornamental decoration and cultivated as a medicinal herb

Damage it causes: Toxic to livestock, crowds out native species

Where it is found: 42 states

Where it is found: 15 states spread across United States

How/when it was introduced: 1917, ornamental decoration

Damage it causes: Toxic sap can cause blindness, crowds out native species

Where it is found: 42 states

Damage it causes: Crowds out pastures and native species with thickets

Where it is found: 43 states

The packages have also been reported in Canada, where Ontario's Central Region Provincial Police posted a warning on Facebook on Wednesday against "foreign seeds in the mail from China or Taiwan."

In Britain, a spokesperson for the Animal and Plant Health Agency said the agency was investigating packages of seeds marked as 'ear studs.'

The Florida Department of Agriculture and Consumer Services said it had received 1,209 reports about the seeds, with 300 phone calls on Thursday alone.

State agriculture departments have also reported packages postmarked from Uzbekistan and Kyrgyzstan, though most are reportedly from China.

Most states are asking people to report the packages to the state agriculture department, which will then send inspectors to collect them.

Sadie Crawford, who works in marketing in Townsend, Massachusetts, said she had just ordered watermelon, ivy and morning glory seeds from Amazon.com Inc, so she assumed the two packages she received were just mislabeled.

"I put them in water and got some sprouts," said Crawford. "We were really curious what they were."

The plants have since died and Crawford reported the second package to the Massachusetts Department of Agricultural Resources.

Seed companies have seen global online and retail demand boom during the pandemic as consumers with time on their hands take up gardening.

But Pruisner cautioned that online international seed purchases could pose an ecological threat.

"The ah-ha moment I really had here is how much seed people are buying from other countries," she said. "I have been simply amazed, when I talk to people, how they say the other seed they've bought from China is fine." (Reporting by Christopher Walljasper; Additional reporting by Kelsey Johnson and Nigel Hunt; Editing by Caroline Stauffer, Tom Brown and Dan Grebler)