If Trump's looking for a 'hoax,' the mirror is a good place to start, Pelosi suggests 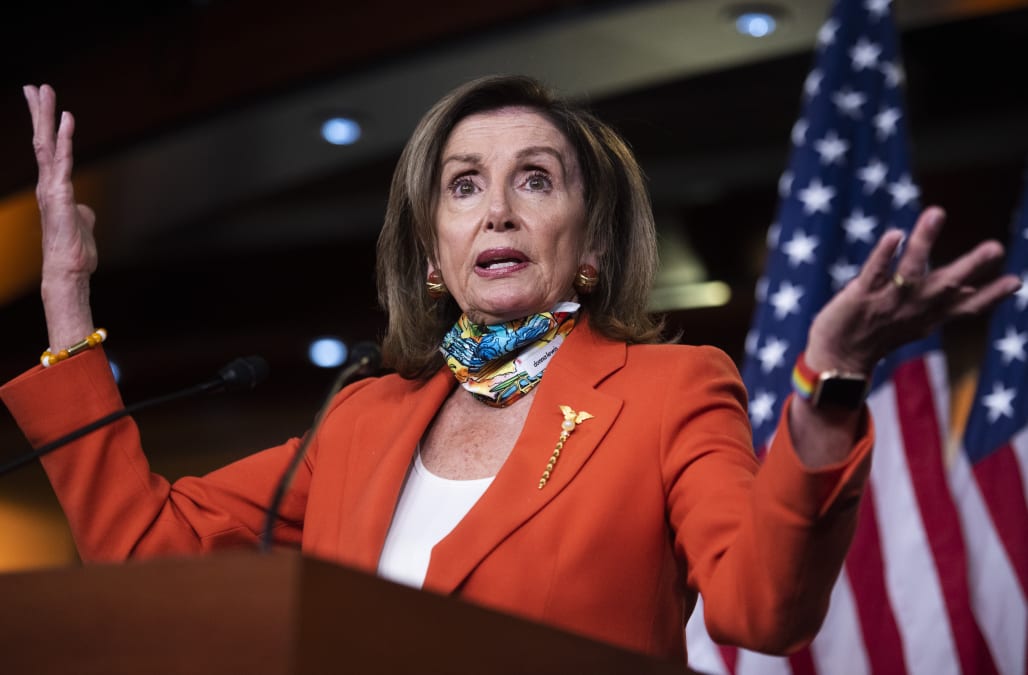 WASHINGTON — Speaker Nancy Pelosi, D-Calif., on Thursday expressed outrage at Trump for what she said was his calling reports about Russian bounties on American troops, Moscow's interference in U.S. elections and coronavirus a hoax — and she pointed to Trump himself as the hoax.

In an interview with MSNBC's Stephanie Ruhle, Pelosi was asked how confident she is in the level of participation by Republicans in an upcoming intelligence briefing about the alleged Russian bounties when Trump has called the reports a hoax.

"He'll say this is a hoax, and it's a hoax that they are 24/7 trying to disrupt our election as they did in 2016. He says the coronavirus is a hoax. The fact is the president himself is a hoax," Pelosi said ahead of the briefing that she and other top congressional leaders, known as the Gang of Eight, were slated to receive Thursday morning.

Pelosi added, "Let's hope that the Gang of Eight shows up, open to hear the truth, the facts, the intelligence, and that 'Moscow Mitch' doesn't show up, but the leader of the Republicans in the Senate comes with an open mind."

Earlier this year, Trump referred to Democrats' criticism of his administration's response to coronavirus as "their new hoax," tying it to impeachment, but he did not specifically refer to the virus as a hoax.

The president tweeted Wednesday that the reports of Russia paying bounties to Taliban-linked fighters to kill U.S. troops are a hoax.

"The Russia Bounty story is just another made up by Fake News tale that is told only to damage me and the Republican Party. The secret source probably does not even exist, just like the story itself. If the discredited @nytimes has a source, reveal it. Just another HOAX!" Trump tweeted.

NBC News has reported the U.S. has gathered intelligence that Russian intelligence officers have offered to pay bounties to Taliban fighters who kill Americans, according to three people briefed on the matter. However, a senior defense official downplayed the intelligence, saying there was no evidence that any bounty was actually paid.

Pelosi also questioned Thursday what Russia may have on the president politically, personally or financially.

"You just wonder what the president would be thinking if this kind of intelligence had come forth about any other country, but every time it's Russia, as I've said over and over. With this president all roads lead to Putin," she said.

Later in the interview, she said, "I think the president should step down because of dereliction of duty."