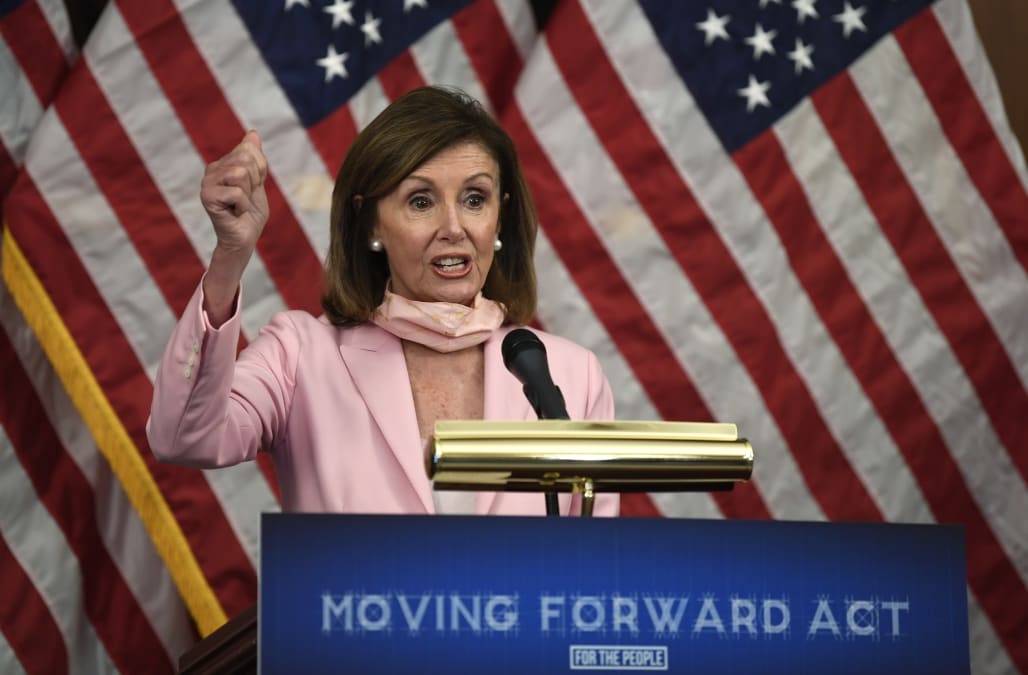 House Speaker Nancy Pelosi, D-Calif., said Sunday that President Donald Trump "wants to ignore any allegation against Russia" as he and his administration deny ever being briefed about intelligence that Russians have offered to pay bounties to Taliban fighters who kill Americans.

Speaking with ABC's "This Week," Pelosi said, "This is as bad as it gets."

"And yet the president will not confront the Russians on this score, denies being briefed," Pelosi said. "Whether he is or not, his administration knows and our allies — some of our allies who work with us in Afghanistan had been briefed and accept this report."

"Just as I have said to the president: With him all roads lead to Putin," she added. "I don't know what the Russians have on the president, politically, personally, financially, or whatever it is, but he wants to ignore, he wants to bring them back to the G8 despite the annexation of Crimea and invasion of Ukraine, despite what they yielded to him in Syria, despite his intervention into our election which is well documented by our intelligence community, and despite now possibly this allegation, which we should have been briefed on."

The U.S gathered intelligence on the Russian bounty offers, three people briefed on the matter told NBC News. The New York Times was first to report on the intelligence, and other outlets have confirmed too.

That intelligence has been shared with Congressional leaders and the British government, the sources said. Meanwhile, a senior defense official said there was no evidence that any bounty was actually paid. One intelligence official told NBC News the report is not surprising given the history between the U.S. and Russia. The U.S. armed Afghan fighters taking on the Soviet Union in the 1980s.

In the Times report, it was said that Trump was briefed on the intelligence. He and multiple administration officials have denied being briefed on it.

On Sunday, Trump called for the Times to "reveal" its sourcing for the story. He tweeted that "nobody briefed or told me," Vice President Mike Pence or White House chief of staff Mark Meadows on the intelligence.

"Everybody is denying it & there have not been many attacks on us," he wrote, adding that "nobody" has been tougher on Russia than his administration.

In a Saturday statement, White House press secretary Kayleigh McEnany said the president and top officials were not "briefed on the alleged Russian bounty intelligence."

"This does not speak to the merit of the alleged intelligence but to the inaccuracy of the New York Times story erroneously suggesting that President Trump was briefed on this matter," she said.

Pointing to McEnany's statement, Susan Rice, who served as national security adviser under former President Barack Obama, tweeted she does not "believe this for a minute, but if it were true, it means that Trump is not even pretending to serve as commander in chief."

"And no one around him has the guts to ask him to," she said. "More evidence of their deadly incompetence."

On Sunday, Pelosi pointed to Russia's longstanding disdain over their 1980s war efforts in Afghanistan and are now seeking to take "it out on us, our troops."

"This is totally outrageous," she said. "You would think that the minute the president heard of it he would want to know more instead of denying that he knew anything."

"Now, if in fact — we'll find out he has briefed and it was in his daily brief — but if it were not, what does that say about the concern that those who briefed the president have about not going anywhere near the Russia issue with this president?" she added.

"I believe that when we ask our service members and their families to take risks and make sacrifices for the United States, it is with the understanding that we will do anything we can to mitigate those risks and honor those sacrifices," she said in a statement. "President Trump appears to have utterly failed to uphold his end of the bargain. Through thorough investigation, oversight, and accountability measures, we can still keep ours."

House Intelligence Committee Chairman Adam Schiff, D-Calif., in a tweet said. "If reports are true that Russia offered a bounty on U.S. troops in Afghanistan and Trump wasn’t briefed, that’s a problem."

"If he was briefed and still wanted Russia back in the G-8, it’s even worse," he added. "What will it take to get Trump to abandon the fiction that Putin is our friend?"

It wasn't just Democrats raising alarms about the report. House Republican Conference Chair Liz Cheney, R-Wyo., tweeted that if "reporting about Russian bounties on US forces is true, the White House must explain who know what and when.

If reporting about Russian bounties on US forces is true, the White House must explain:
1. Why weren’t the president or vice president briefed? Was the info in the PDB?
2. Who did know and when?
3. What has been done in response to protect our forces & hold Putin accountable?

Speaking with NBC's "Meet the Press" on Sunday, Trump's former national security adviser John Bolton said the U.S. "should be cautious" about the intelligence, adding however that he could "never" recall "a circumstance where the president himself goes out of his way to say he wasn't briefed on something."

Bolton, who recently released a highly critical book on the president and his time in the White House titled "The Room Where It Happened," told CNN's "State of the Union" that if true this bounty scheme "is one of the most serious matters I think that has arisen in the Trump administration."

"So what is the presidential reaction?" Bolton said of Trump's tweets. "It's to say 'it's not my responsibility, no one told me about it,' and therefore to duck any complaints that he hasn't acted effectively."

"This is part of the problem with President Trump's decision making in the national security space," Bolton added. "It's just unconnected to the reality he's dealing with. It's about his personal position."