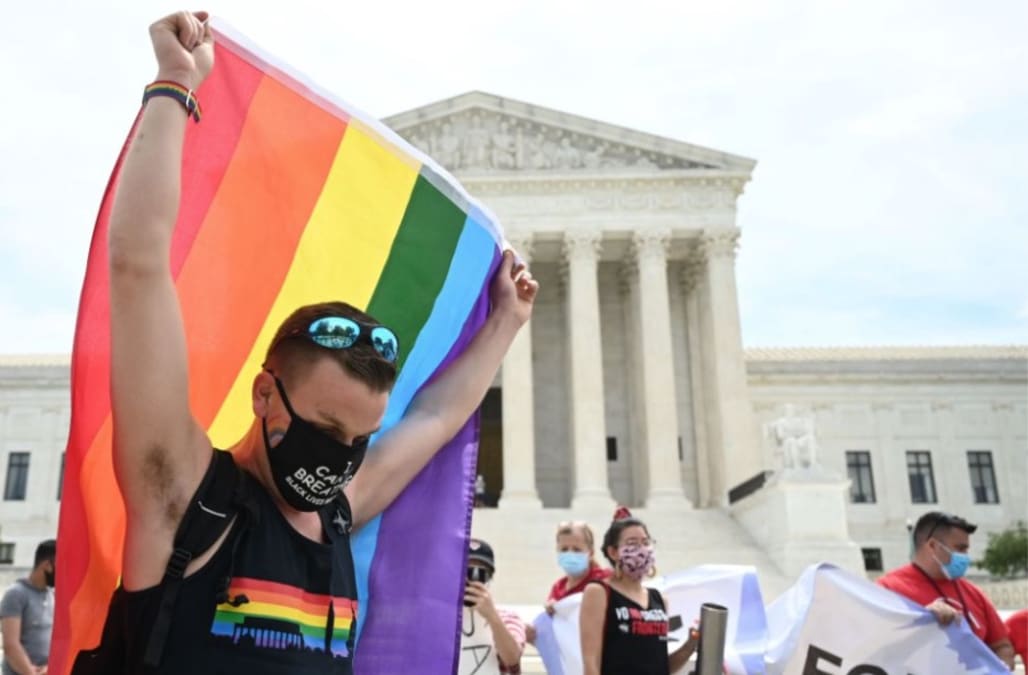 Gerald Bostock has had many sleepless nights over the past seven years. And though he was the victorious plaintiff in Monday’s stunning 6-3 Supreme Court decision — to protect gay and transgender employees from workplace discrimination — he still had trouble falling asleep on Monday night. But at least it was for a different reason: excitement.

“I’m still processing, to be honest,” Bostock, 56, tells Yahoo Life, on the phone from Atlanta, where he lives with his partner. “I thought last night, before going to bed: This is probably going to be the best night’s sleep I’ve had in seven years. But I actually had a difficult time falling asleep, and I think it was because of the adrenaline, and just still trying to mentally and physically process what was and is going on.”

Of awakening on Tuesday to the new world he helped bring about, he adds, “Today is another day, and I wake up with those same feelings of happiness and joy and gratitude.”

The long journey for Bostock — one of three plaintiffs, along with Aimee Stephens and Donald Zarda, both of whom have died since the start of the lawsuits — began in 2013, when he was fired by Clayton County from his job as a child welfare advocate at a suspicious moment, shortly after he joined a local gay recreational softball league. That’s when, he believed, the move drew attention to his sexual identity, leading to negative comments by coworkers and, eventually, his seemingly baseless termination. Turns out he was right — something he knew in his heart from day one, which, combined with unwavering support from family and friends, allowed him to doggedly fight for justice for so many years.

“Without them. I wouldn't be here today,” he says, noting that he’s seen an outpouring of thanks and congratulations from gay athletic groups and LGBTQ equality organizations, from the ACLU to HRC. “Without this network of support, I just know that I could not have done it. And then, of course, my faith in knowing that I did nothing wrong.”

BREAKING: Aimee Stephens, Don Zarda, and Gerald Bostock won! The Supreme Court ruled that it was against the law to fire our clients for being LGBTQ.

There is no question: LGBTQ people are protected from discrimination in the workplace.

BREAKING NEWS: In a landmark decision, #SCOTUS affirms that sexual orientation and gender identity are protected characteristics under Title VII of the Civil Rights Act. pic.twitter.com/H3fPldo86C

Good morning. Today could be another potential #DecisionDay.

We're waiting to see if the Supreme Court will release a decision on the Title VII LGBTQ cases, ruling whether or not your employer can fire you over your sexual orientation or gender identity. pic.twitter.com/4akbAUdsUM

Of course, a ruling saying just that, from the highest court in the land, brings with it “a certain level of validation,” he says, but adds that “when this happened, I was like, ‘Nobody's going to take my hard work and success away from me — especially because it impacted so many children in that community. I wasn't going to let anybody, especially Clayton County, take that away from me.” His next priority, he says, is to continue legal action against the county, now that the path has been cleared.

For Bostock, who says he came out late in life, becoming an LGBTQ justice warrior was something he couldn’t have seen coming. Though once out, he was always honest about who he is.

“I didn't come out as a young child, not a high school student, not even still in college. I was a young adult when I was going through that process,” he shares. “But then and now I don't lead a secret life. People who know me, they know I'm gay, they know I’m in a relationship with a wonderful man… I may not carry the rainbow flag down the work hallway, but I don't hide my true self, and I am respectful to others. That's who I am, and anybody that knows me knows that to be true.”

He wound up joining the Hotlanta softball league, he says, because he had just finished treatment for prostate cancer, and thought that athletics would be empowering. “I wanted to prove to myself, at that time that I was still going through cancer, that I could still do it, mentally and emotionally. And I don’t regret that decision one bit. And, in fact, I don’t regret any decision I’ve made since that day I had to walk out of Clayton County Juvenile Court.”

For Bostock and his partner — whom he met right around the time of being fired — going through this long legal fight together has brought them closer, he says. They were together at home Monday morning, logging on to work remotely and watching the SCOTUS blog, as has become their routine, when they first heard the news.

“Shortly after 10 o’clock, someone posted on the blog that they were about to announce Bostock vs. Clayton County. And I think my heart stopped for a brief moment there,” he says, recalling that the blog crashed for a bit, as the opinion was 172 pages long. Finally, someone was able to post part of the first page, he recalls, “And when I read the first few words, my partner and I looked at each other and we were like, Oh my gosh, we did this. We won. There was a brief moment of yelling and screaming and hugging and having that celebratory moment with my partner.”

He adds, “I'm extremely overwhelmed and thrilled, and my heart is just full of gratitude.”

The idea that he is someone who has forever altered the course of history when it comes to having expanded LGBTQ rights — just like Edie Windsor and John Lawrence and Jim Obergefell before him — is one Bostock is still wrapping his head around.

“Let me make this clear: I didn’t ask for any of this. And gosh, if someone would have told me seven years ago that I’d be sitting here talking with you today, I would’ve laughed. I never realized that my life would be turned upside down after I made this decision to join a gay recreational softball league, and making that decision has impacted every part of my life…And, you know, I'm just a regular guy that wanted to go to a job he loved and a job he was good at.”

Now Bostock works at a local hospital as mental health advocate — something truly needed now, amidst this country’s concurrent crises of a pandemic and racial strife, as is the positivity of this ruling, say many.

“I think this decision came at such a vital time for all of us… and my hope is that this victory will at least shine a little bit of sunshine on these dark days that we've had,” he says. “I think the clear message that was sent out by the justices has laid the groundwork… and there's so much more work that needs to be done. We will continue our fight for equality, because there's absolutely no room in this world for any type of discrimination or racism. So, I'm very proud of having a small role in getting us to this historic moment.”