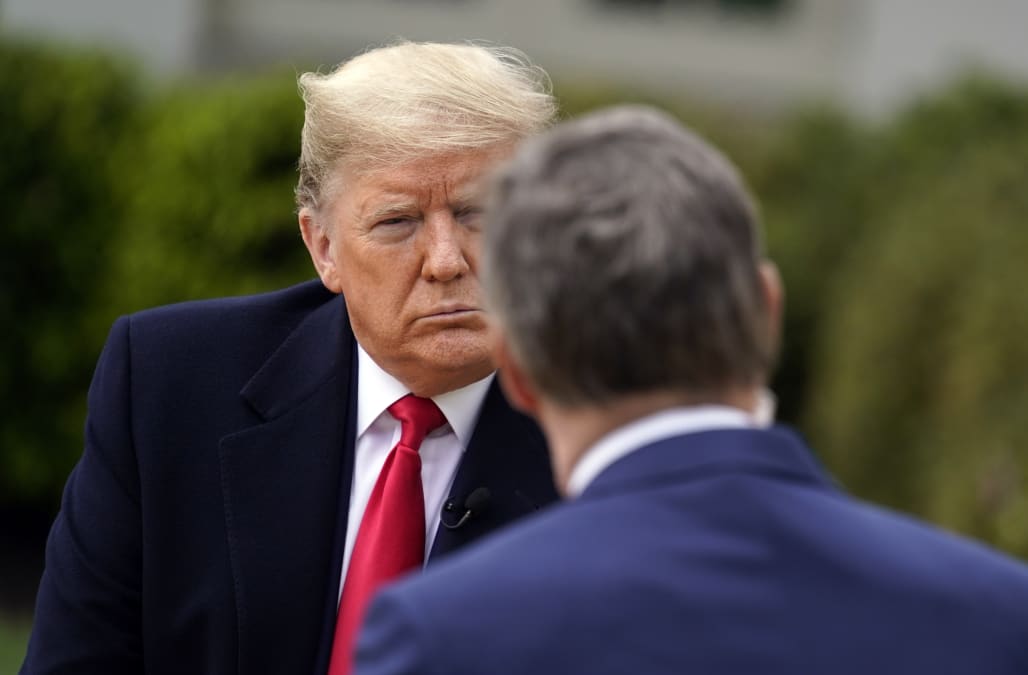 President Trump complained Thursday that his onetime favorite network, Fox News, isn’t doing enough to help him and other Republicans get reelected.

In tweets posted as he flew to Michigan to tour a Ford factory that has been converted to manufacture medical ventilators, the president stepped up his attacks on Fox News, the conservative cable network owned by Rupert Murdoch.

“Many will disagree, but @FoxNews is doing nothing to help Republicans, and me, get re-elected on November 3rd. Sure, there are some truly GREAT people on Fox, but you also have some real ‘garbage’ littered all over the network, people like Dummy Juan Williams, Schumerite Chris Hahn, Richard Goodstein, Donna Brazile, Niel [sic] Cavuto, and many others,” Trump wrote. “They repeat the worst of the Democrat speaking points, and lies. All of the good is totally nullified, and more. Net Result = BAD! CNN & MSDNC are all in for the Do Nothing Democrats! Fox WAS Great!”

Fox News, which for years had billed itself as “Fair & Balanced,” dropped the slogan in 2017.

The latest outburst targeting Fox News came just days after anchor Neil Cavuto chastised the president over his declaration that he was taking the antimalarial drug hydroxychloroquine to ward off possible infection from the coronavirus.

Cavuto alluded to studies that found the drug does not help treat or prevent COVID-19 and posed serious health risks, including death.

“If you are in a risky population here, and you are taking this as a preventative treatment to ward off the virus or, in a worst-case scenario, you are dealing with the virus, and you are in this vulnerable population, it will kill you. I cannot stress enough: This will kill you,” Cavuto said hours after Trump revealed he was taking the medication.

In response to Cavuto’s segment, Trump wrote on Twitter that he was “looking for a new outlet” to watch. In press briefings over the last two months, he has gone out of his way to praise reporters from One America News Network, which reports on him very favorably.

During the same period, Trump has stepped up his criticism of Fox News’ on-air personalities.

....fraud @donnabrazile (and others who are even worse). Chris Wallace is nastier to Republicans than even Deface the Nation or Sleepy Eyes. The people who are watching @FoxNews, in record numbers (thank you President Trump), are angry. They want an alternative now. So do I!

In April, Fox News cut ties with Diamond and Silk, commentators who had suggested during a network appearance that the coronavirus was being intentionally spread in the U.S. to hurt Trump politically. The president again voiced his displeasure with network executives.

But I love Diamond & Silk, and so do millions of people! https://t.co/RBX9bmFIwH

Perhaps the easiest way to understand Trump’s frustration with each and every Fox News segment that is not fully supportive of his agenda is to look at who watches the network. According to the Pew Research Center, 93 percent of Fox News viewers who say the network is their main source for political news “identify as Republican or lean to the party,” but just 65 percent of Republicans overall say they trust Fox News over other outlets.

Trump needs to hold on to his base to be reelected, yet a Quinnipiac University poll released Wednesday found that by a small margin more Democrats (88 percent) said they planned to support former Vice President Joe Biden on Nov. 3 than Republicans who plan to vote for Trump (87 percent). That may be why the president keeps his eyes glued to Fox News. The poll had Biden leading Trump nationally by a margin of 50 percent to 39 percent.

In a Morning Consult poll released Thursday, 73 percent of respondents agreed that Trump’s social media accounts should be suspended or limited because he is spreading misinformation about COVID-19.

More from Yahoo News:
Trump on his coronavirus test: ‘I tested positively toward negative’
Trump threatens to withhold aid to 2 states over expanded voting by mail
New polls show trouble for Trump and Republicans in GOP strongholds