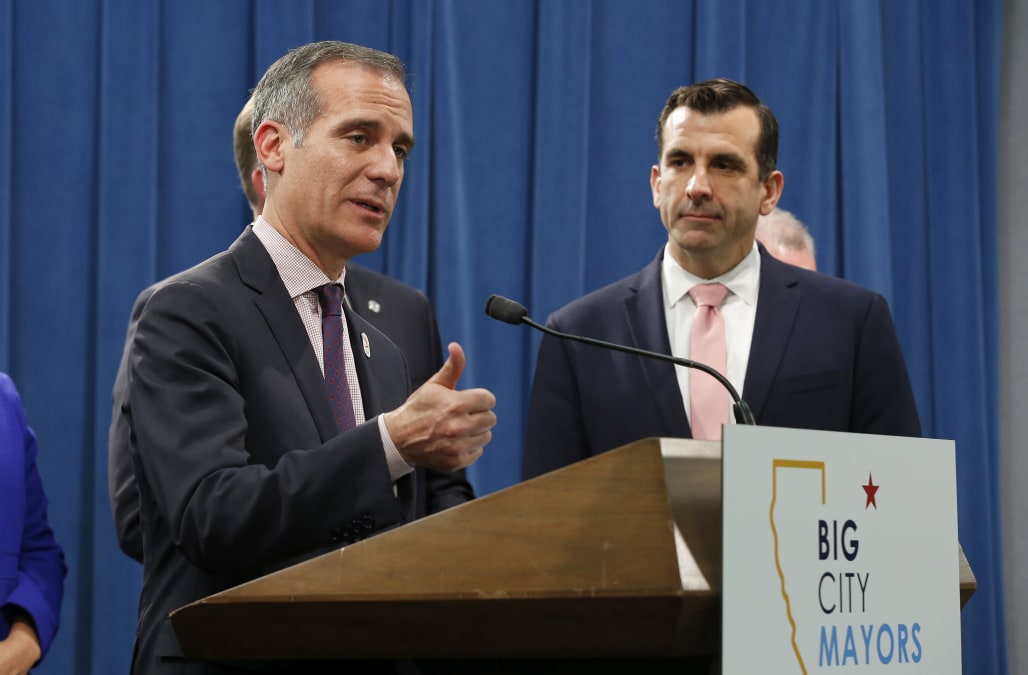 Los Angeles residents will be confined to their homes until May, at the earliest, Mayor Eric Garcetti told Insider on Wednesday.

"I think this is at least two months," he said, "and be prepared for longer."

In an interview with Insider, Garcetti pushed back against "premature optimism" in the face of the COVID-19 pandemic, saying leaders who suggest we are on the verge of business-as-usual are putting lives at risk.

"I can't say that strongly enough," the mayor said. Optimism, he said, has to be grounded in data. And right now the data is not good.

"Giving people false hope will crush their spirits and will kill more people," Garcetti said, noting it will change their actions, instilling a sense of normalcy — and normal behaviors — at the most abnormal time in a generation.

"This will not kill most of us," he noted. But, "It will kill a lot more people than we're used to dying around us."

On Tuesday, Garcetti said the city was anywhere from six to 12 days away from the fate of New York City, where a surge in patients with the novel coronavirus is threatening to overwhelm the health system.

As of noon on Tuesday, Los Angeles County public health officials said there were 662 confirmed cases of COVID-19, the disease caused by the novel coronavirus, with 11 confirmed deaths. The actual numbers are no doubt higher, with officials only recently beginning to roll out testing.

Los Angeles, where intensive-care units were 90% filled long before the expected peak of the COVID-19 outbreak, is no better prepared. In the weeks to come, Garcetti said everything from convention centers to sports arenas, such as the Staples Center, may need to be converted into space for hospital beds.

US Vice President Joe Biden laughs as Los Angeles Mayor Eric Garcetti speaks to workers at Bobrick Washroom Equipment, including longtime employee Rigo hernandez, in Los Angeles on July 22, 2015, where Biden came to discuss the 'importance of increasing the minimum wage to give anyone who works hard every day the chance to earn a livable wage.''

Los Angeles Mayor Eric Garcetti gestures while posing with former Los Angeles Laker Kobe Bryant, joined by his family and city officials after Bryant was honored at a city council meeting with Kobe Bryant Day on August 24, 2016 in Los Angeles, California, with the date commemorating the 2 numbers, 8 and 24, he wore on his Lakers jersey spanning a 20-year career.

Los Angeles Mayor Eric Garcetti and his wife Amy Wakeland pose as they arrive for a dinner gala at The Broad Museum in Los Angeles, California, September 17, 2015. The new museum built by philanthropists Eli and Edythe Broad, featuring their collection of modern art, will open to the public on September 20.

While concerned about the economic fallout, more than anything, Garcetti said, he's worried about the irreplaceable loss of life that's predicted with this pandemic.

Have a news tip? Email this reporter: cdavis@insider.com

More from Business Insider:
Person under 18 dies from the coronavirus in Los Angeles
Coronavirus symptoms start slow, and worsen quickly, doctors say
Trump again breaks with experts by calling for people to go back to work, claims seniors 'will be watched over protectively & lovingly'