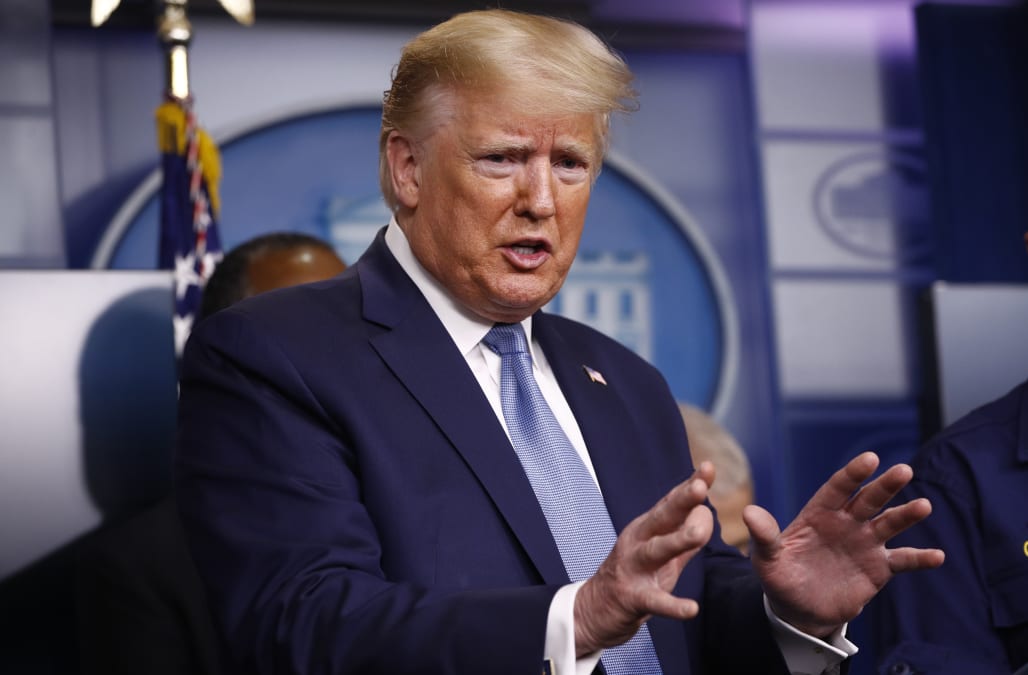 WASHINGTON — The delay by the administration in making coronavirus tests available is a problem that is now “too late to be fixed,” Ron Klain, who handled the 2014 Ebola crisis for former President Barack Obama’s administration, told Yahoo News in a wide-ranging interview this week. Klain said that while President Trump has fumbled several aspects of the federal government’s coronavirus response, he expects the shortage of tests in the United States to be one of the most enduring legacies of the crisis.

“The No. 1 thing that people will flag from day one, where the administration has just totally dropped the ball,” is testing, Klain said on the Yahoo News “Skullduggery” podcast. “Because the main purpose of testing in January, in February, was to identify where the disease was and isolate it before it spread wildly. Now it’s spread.”

Klain was chief of staff to former Vice President Joe Biden and is now a senior adviser to Biden’s presidential campaign. Maintaining that his criticisms are not motivated by politics, he singled out Republican governors Mike DeWine of Ohio, Larry Hogan of Maryland and Charlie Baker of Massachusetts for their deft and proactive responses to the coronavirus.

“Calling out the Trump administration failures is not politicizing it,” Klain said. “It is a demand for action to save lives.”

The virus’s spread will cost thousands of American lives and will inflict long-term damage on the economy, Klain said. And there is no clear indication that the number of tests available in the U.S. will ramp up anytime soon.

And with a few exceptions, only celebrities and well-connected leaders have easily procured tests so far. “You can’t get a test unless you’re an NBA player or a movie star or a member of Congress,” Klain said. “That is the reality.” He said the administration’s decision not to use a test provided by the World Health Organization is indefensible, particularly since almost every other country is relying on the WHO test, and “they’re doing a better job of controlling this disease than we are.”

Klain said the Centers for Disease Control and Prevention’s subsequent failure to quickly create its own test only exacerbated the problem and further exposed the administration’s incompetence.

“As all this was unfolding in January, in February, President Trump resisted the demands that he put someone in charge at the White House,” Klain told “Skullduggery” hosts Michael Isikoff and Daniel Klaidman. “He at first had no one in charge at all. Then he put Alex Azar in charge, in just one Cabinet department.”

“This is still an ongoing mess,” Klain said. “It needs organization, it needs direction and it needs prioritization. And finally, what it needs, really, is accountability. We don’t really know how many people are being tested each day, we don’t know where the gaps are. That’s not being reported by the Centers for Disease Control on a real-time basis, and you can’t fix a problem if you can’t measure a problem.”

Klain published a scathing op-ed in the Washington Post in January laying out what he believed the administration needed to do to have a shot at avoiding the current crisis. He also testified before Congress in February to repeat his call for a single White House czar to lead the administration’s response.

While Klain said the incompetence of the administration is “bad enough,” he is even more distressed that “the president of the United States, until a few days ago, was up there saying this isn’t a problem. Just a couple of weeks ago, he said there are only 15 cases, they’re all going away, [and] that the travel restrictions on China had sealed the country up tight.”

Klain said that while he was Ebola czar, even with Obama demanding answers, it was still “difficult to get the bureaucracy to do the right thing.”

“If you have a president saying to people, ‘This isn’t a problem,’ if you have a president sidelining scientists who speak out and say it’s a problem, and this president did, then it is absolutely impossible to get the bureaucracy ... to do the right thing because inertia is the default setting,” Klain continued. “And when you add to that inertia a discouragement of action, a suppression of truth, you are going to go from inaction to even what’s worse than inaction, and that’s what we saw here.”

Ebola, a hemorrhagic fever that originated in Africa, was almost entirely controlled in the United States, accounting for just a handful of cases, none by community spread.

Trump, a private citizen at the time, tweeted about Ebola more than 100 times in 2014, denouncing the administration’s handling as criminally incompetent.

The administration continues to fumble its response, said Klain, citing the CDC’s guidance to doctors this week to use bandannas as masks when seeing patients, since many hospitals have run out of masks.

“How long can we put up with this?” he asked. “This is a social science experiment with life or death consequences that we’re running in real time in the United States.”

A day after Trump stirred controversy by pointedly calling the coronavirus a “Chinese virus,” Klain also said the administration’s initial obsequiousness toward the country is a glaring contradiction. On Jan. 24, Trump tweeted praise for the Chinese response and transparency in controlling the virus, Klain said, even though the Chinese wouldn’t allow American scientists access to data they needed to better understand the virus.

Klain singled out former White House national security adviser John Bolton’s 2018 decision to close the National Security Council office responsible for responses to pandemics as an especially damning indictment of the administration. Klain recommended creating the office after he led the Ebola fight for Obama. He said it was clear to him then that the United States needed to be “prepared for the next one.”

“We knew this day was coming,” he said. “We didn’t know when and where, but we knew it was coming. And President Obama put in place a structured plan for it.”

“There is no question in my mind that we were less prepared for this and responded less quickly because there was no one at the White House after the summer of 2018 in charge of preparing for and planning for this response,” Klain said. “The president made a conscious decision with John Bolton to de-prepare the country from where we were, and to disband the unit that was getting us ready.”

More from Yahoo News:
Trump touts 'game changer' drug against coronavirus. What does the study show?
How the coronavirus has disrupted education for one California family — my own
Federal law enforcement document reveals white supremacists discussed using coronavirus as a bioweapon