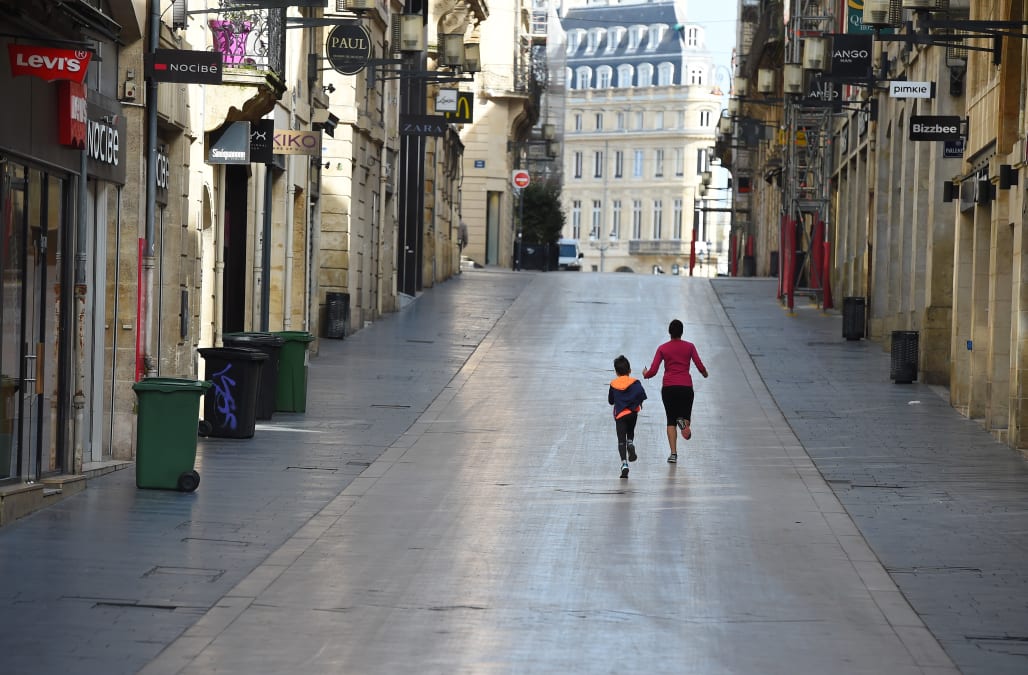 With the number of coronavirus cases multiplying at an ever-rapid rate, countries whose citizens are not yet on full lockdown are beginning to wake up to the possibility.

While Downing Street insisted on Thursday there was “zero prospect” of travel in and out of London being restricted, the government has not ruled out introducing “further and faster” measures in its battle against the virus.

Schools are set to close across the UK on Friday, and the government has advised that large gatherings should not take place. With social distancing measures in place, many people may already feel that they are in some sort of quarantine.

In other countries, people are allowed to leave their homes only briefly, to shop for food and take care of other essentials.

We asked HuffPost colleagues in Italy, Spain and France ― all of whom are in nationwide quarantine ― for their experience and tips on getting through an unprecedented situation.

(And yes, toilet paper is an issue everywhere.)

How have people behaved? Have they followed government advice?

In the UK, concerns have been raised about people flouting ministers’ advice, continuing to gather in groups and visit pubs ― including the PM’s own father.

“At the beginning, people just didn’t understand that we couldn’t go out,” she added.

“Now, there are people who still try to ‘cheat’ and pretend they’re going to work, or to the supermarket.”

Spanish media has reported that police, who are enforcing quarantine measures, have issued about 100 fines in each large city. In Italy, latest government rules mean people cannot leave the house without good reason, with police filing reports on those who flout them.

Federica Oliva, from HuffPost Italy, said 46,000 reports were made in a single week.

″[That is] not so many, I think, as there are 60 million inhabitants in Italy,” she added.

“Government could introduce other restrictions to get people to stay more at home. For example, running isn’t officially forbidden, but [our] sports minister yesterday said that government could consider placing a complete ban on outdoor sport activities.”

“There is clearly a difference between now and before the lockdown was declared last Tuesday,” she added.

“One minute out in Paris is enough to see that the streets emptied, that all the cafes and restaurants are closed. On the roads, you only see a few cars, taxis, buses and a few Deliveroo bikers.

“But there is still activity in the streets of the capital. People are going out to buy their bread or a few things on the local markets, to purchase cigarettes or to the drugstore. You also notice people doing a quick run. Exercise, alone and around your home, is still allowed. It may give us a sense of normality.”

Have there been any food shortages, or problems getting the essentials?

“Sometimes. It’s especially difficult to get toilet paper (we still don’t know why) if you go to the supermarket in the afternoon or evening,” said Velasco.

“It’s almost the same with other essentials, like milk or meat, but it also depends on the area.”

Spanish supermarkets have introduced measures similar to some UK chains, opening their doors for an hour early in the morning to allow at-risk groups to shop for essentials and avoid crowds.

In Italy, Olivo said, shops are not short of stock, but customers were initially worried about having access to what they needed.

“People were afraid, especially in recent days, of not being able to stock up on food and other essentials,” she added.

“There have been long lines to enter in supermarkets, especially in the cities, especially a few hours before the prime minister [Giuseppe Conte] announced more restrictive measures against coronavirus.”

In France, shelves were cleared of rice and pasta during an initial period of panic.

“But the government have already announced that there will be not food shortages and that is true, if people stop buying provisions for months.

“The only things that are out of stock are the ones medical staff need more – masks and hydroalcoholic gel.

“This is a shortage we are following closely and that is already problematic in hospitals, and for the workers still in contact with people like cashiers, professors and staff looking after the children of the medical workers.”

What’s been the hardest part?

“The feeling of uncertainty. Nobody knows when this will end, or how,” Velasco said.

While the Spanish government has approved economic relief measures, including a 200bn euro ‘coronavirus package’ worth 20% of the country’s output, many are still losing jobs.

Velasco added: “I think the hardest part is the emotional one. To understand that you can’t go out, see your relatives or friends in person; to assume that if you need bread, you’ll need to spend time and wait in a queue to get it; to accept that the weekend comes and the sun is shining, but you’ll remain at home.

“There are good and bad moments during this confinement.  The good thing is that people know that we are united to fight the virus.” Olivo said she found the first days in Italy’s quarantine the most difficult, when she realised normal life would have to be put on hold.

“I knew it was the only right thing to do, for the community, and I am following all the new rules, carefully and responsibly,” she added.

“But it is complicated to change your life in a few days, not knowing how long this situation will last. For people who live alone, I think it’s even more complicated.

“Fortunately, thanks to social media, we are able to stay in touch with friends and relatives. But staying away from each other, even if necessary, is difficult. We can’t hide it.”

Have people found hope and positivity in surprising places?

“People are applauding every evening at 8pm in solidarity with health workers and other professionals, or simply playing songs, talking to their neighbours, singing them happy birthday.

“There has also been many young people who [have] offered to do the groceries for older people in their neighbourhood.”

French people have joined the 8pm applause for medical staff, and have found solace in phone calls, group chats and playing games together online, Provost said.

Balconies have also been a lifeline in Italy – after footage of residents in Siena singing together went viral – but not everyone is supportive of the move.

“The first time was last week, when, through social media, it was proposed to sing the national anthem from the balconies,” Olivo said.

“Next day, at midday, there was a big round of applause dedicated to doctors and nurses. Since then, every day at 6pm, from the windows and balconies of Italy there are people who sing.

“For some it is a way of gaining strength and feeling close staying at home, but there are those who criticise this habit. They consider it not respectful of the people who suffer and the many who, unfortunately, are dying of the coronavirus.” 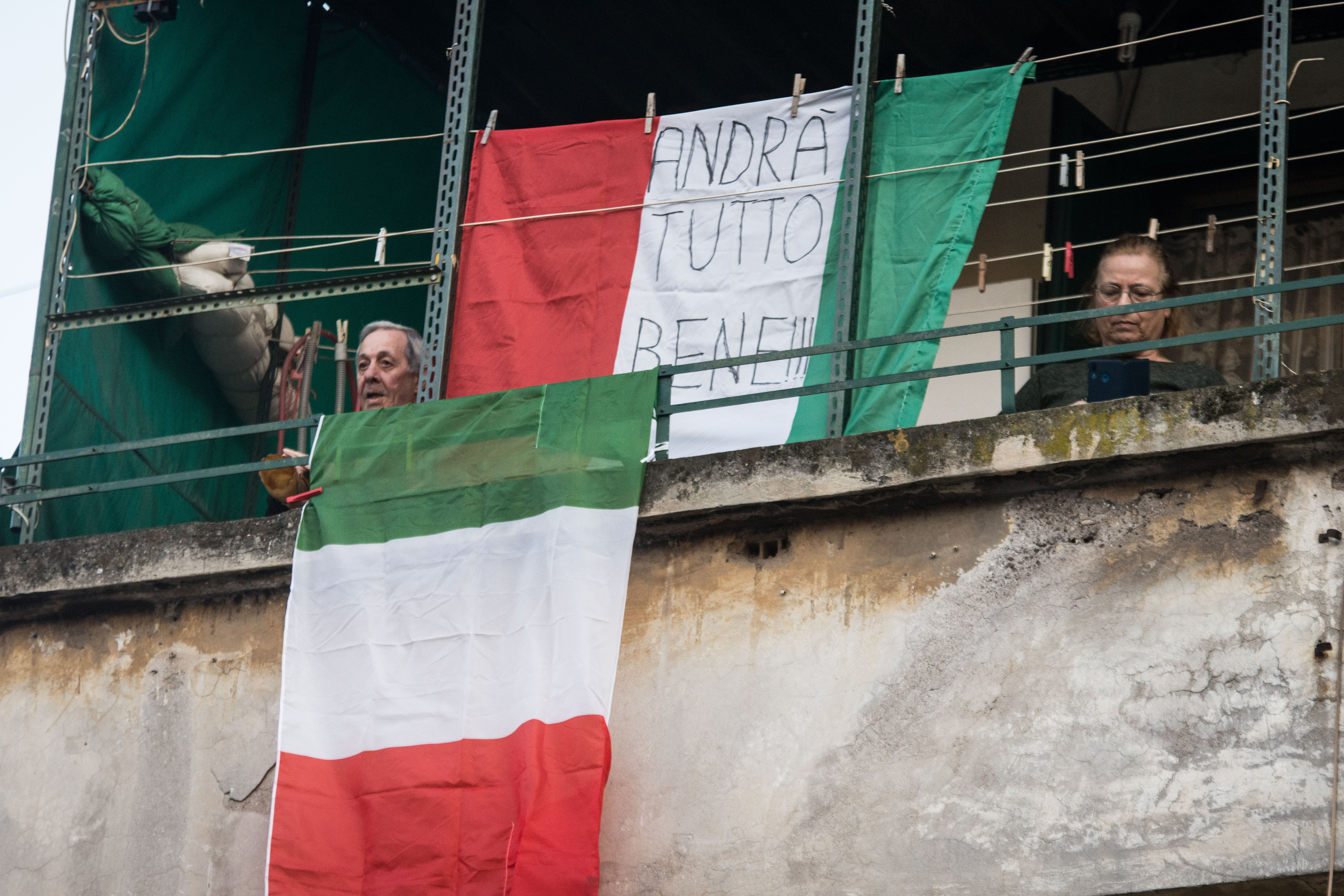 What might be useful things for people to do while they still can?

Forget hair and beauty appointments, Olivo said, as many people won’t be leaving the house much.

“It could be useful go to dentist or optician while you still can,” she added, and said that while some services may still be able to operate, it could take longer than usual to get an appointment.

“Until this morning, I thought this wouldn’t be a problem, but I woke up and I found out that my glasses were broken.”

Velasco said she is glad of the things she did in the weeks leading up to the lockdown, which people might usually take for granted.

“I feel lucky I could do a trip to Portugal just before the quarantine, I feel lucky to have a balcony of my own, to have seen my parents a couple of weeks ago, to have been able to go for a last run before this happened.”

Provost said in France, a home printer is useful if you need to print certificates to leave the house.

“It is also very helpful for parents printing homework for their children and colouring activities,” she added.

“Also a video game console, board games for two and more, books, because book stores are closed, a computer keyboard and second screen to have a good set-up for an extending working from home period.”

What’s the best piece of advice you could give to help people get through a lockdown?

“Thinking that this is for a good reason, and that it’s temporary,” said Velasco.

“Try not to get obsessed with the news, to relax a bit, do some exercise at home and speak to family and friends.

“Try something new you’ve always wanted to, but never found the time.”

Velasco added that she is passing the time listening to Deforme Semanal, a Spanish podcast led by two feminist women “who ‘analyse’ the cultural and political situation with a lot of humour”.

Olivo said: “Practical advice: make sure you always have at home everything you need during the day. It’s not difficult and you can do this by going out to shop once a week.

“Emotional advice: in moments of despair, think about the future. When everything is over, it will be beautiful to do again what we took for granted just a few weeks ago – having coffee with friends, walking in a park, going to work.

“In the meantime, stay at home.”

More from HuffPost US:
U.S. and Canada restrict border to essential travel during coronavirus pandemic
Italy has been trying to send us a warning. Will we listen?
Vive La France! Luxury perfume brands to make free hand sanitizer.