Trump touts chloroquine for 'immediate' use treating coronavirus, but FDA wants to see the data first 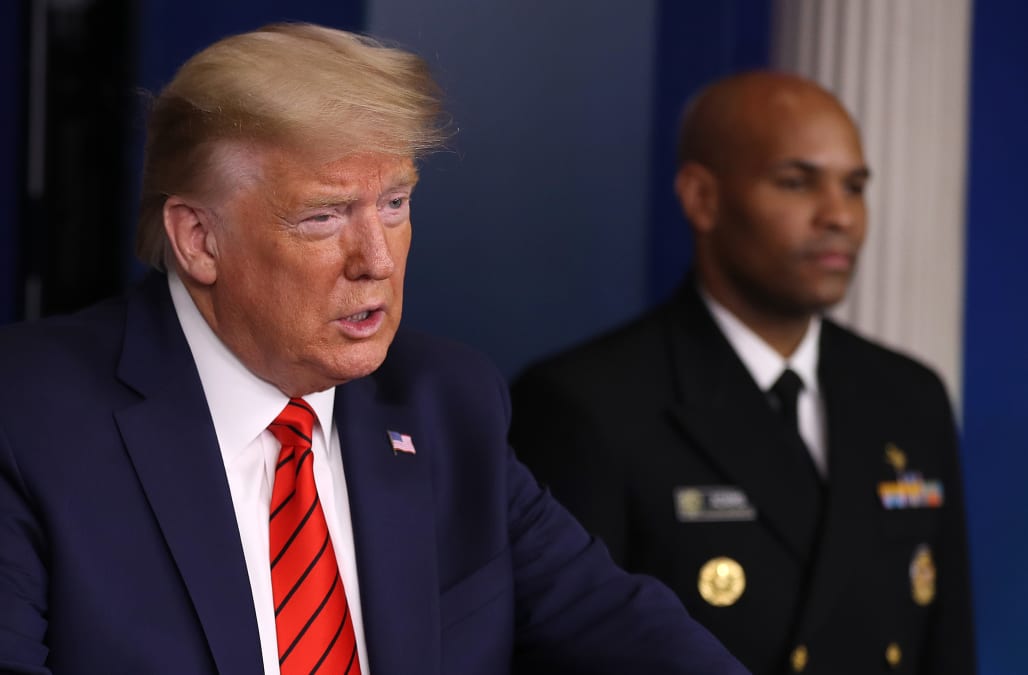 “It’s shown very encouraging, very, very encouraging early results, and we’re going to be able to make that drug available almost immediately, and that’s where the FDA has been so great,” Trump said. “They’ve gone through the approval process, it’s been approved and they did it, they took it down from many, many months to immediate.”

But moments later, FDA Commissioner Stephen Hahn cautioned that chloroquine had not yet been approved for treating COVID-19.

“We want to launch a large clinical trial using malaria drug chloroquine for treatment of COVID-19,” Hahn said, adding, “Again, we want to do that in a setting of a clinical trial.”

Trump made his remarks at what has become a White House daily press briefing since the coronavirus outbreak has ground daily life to a halt in many U.S. states.

Chloroquine was introduced to the public in the 1940s to prevent malaria and has a range of possible side effects including headache, loss of appetite, diarrhea, hair loss, skin rashes and mood changes. French researchers have been conducting a clinical trial to determine if the drug can treat COVID-19, and published a paper on Feb. 15 in the journal ScienceDirect on their findings.

Trump touted the drug and said it could soon be used widely for the coronavirus.

“A drug called chloroquine, and some people would add to it, hydroxychloroquine, so, chloroquine or hydroxychloroquine, now this is a common malaria drug. It’s also a drug used for strong arthritis,” Trump said at Thursday’s coronavirus press briefing. “Somebody has pretty serious arthritis, also uses this in a somewhat different form, but it is known as a malaria drug and it’s been around for a long time and it’s very powerful. But the nice part is it’s been around for a long time, so we know that if things don’t go as planned it’s not going to kill anybody.”

Preliminary reports from researchers in China and France have indicated that chloroquine or the related drug hydroxychloroquine may have some benefit against coronavirus, but there is not enough data to be sure. It’s not uncommon for drugs to show promise in small numbers of patients but fail when tested more broadly.

The president boasted about his efforts to cut red tape in the drug approval process “so this work can proceed rapidly, quickly — and fast."

Asked when chloroquine and remdesivir — another drug that has shown promising results treating COVID-19 but has also not been approved by the FDA for that purpose — would be available, Hahn was decidedly less optimistic than the president.

“I don’t want to speculate about a timeline at this point,” Hahn said.

He also said a coronavirus vaccine was still likely a year away from being made available to the public.

“For now the vaccine is only in phase one, and it will take approximately one year to approve it,” Hahn said.

More than 10,400 cases of COVID-19 have been reported in the United States as of Thursday, including at least 150 deaths, a dramatic rise that has mirrored the steep curve seen in countries like Italy, France and Germany in recent weeks.

With Americans showing mixed responses to voluntary distancing practices, Trump seemed Thursday to pin his hopes on stopping the outbreak on a pharmaceutical weapon.

“If chloroquine or hydroxychloroquine work, you're going to see numbers come down very rapidly," he said, adding, “We are very excited about chloroquine. There are a lot of reasons I have to believe, again Dr. Hahn is the expert, it could have a very positive effect, or a positive effect, maybe not very, but maybe positive."