Pelosi calls on Trump to use Defense Production Act 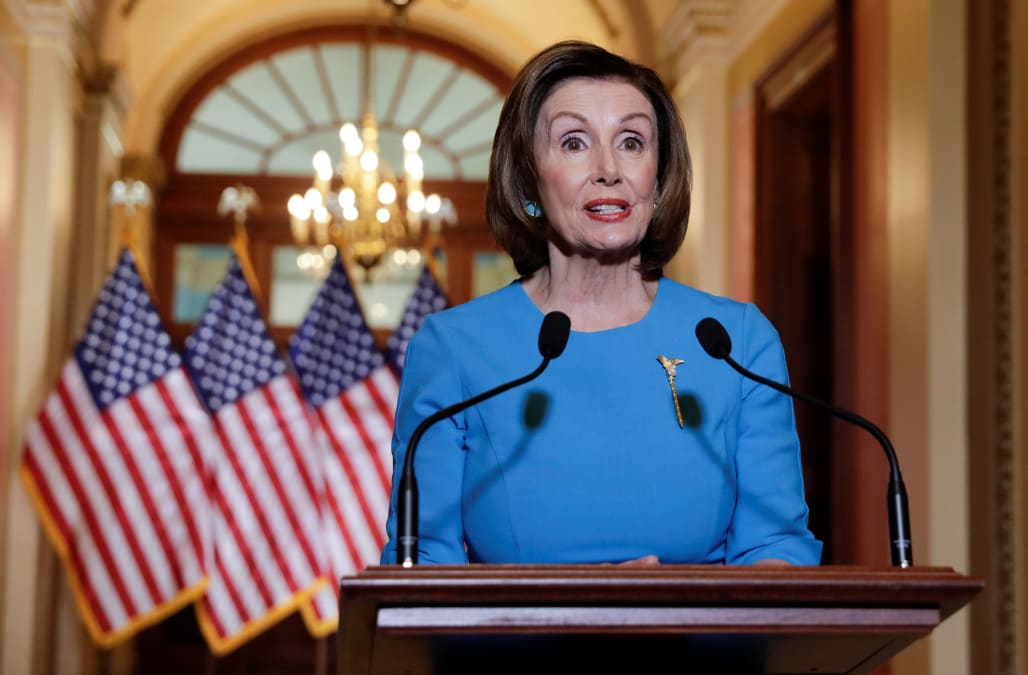 WASHINGTON — House Speaker Nancy Pelosi called on President Trump Thursday morning to use the Defense Production Act powers that he invoked Wednesday but later in the day said he was not yet utilizing in the fight against the coronavirus.

“Right now, shortages of critical medical and personal protective equipment are harming our ability to fight the coronavirus epidemic, endangering frontline workers and making it harder to care for those who fall ill,” Pelosi said in a statement.

“The President must immediately use the powers of the Defense Production Act to mass produce and coordinate distribution of these critical supplies, before the need worsens and the shortages become even more dire. There is not a day to lose,” she said. “We must put more testing, more protective equipment and more ventilators into the hands of our frontline workers immediately.”

Pelosi said she was reacting to a tweet posted by president late Wednesday afternoon, in which he said, “I only signed the Defense Production Act to combat the Chinese Virus should we need to invoke it in a worst case scenario in the future. Hopefully there will be no need, but we are all in this TOGETHER!”

That tweet was a confusing signal from the president after he had invoked the DPA earlier in the day, announcing the move at a White House briefing on the health crisis.

That followed comments Trump made Tuesday when he said he hoped he wouldn’t have to use the DPA. He did not say why, other than to remark, “We hope we don’t need it. It’s a big step.”

Dov Zakheim, a former Pentagon comptroller under President George W. Bush, told Yahoo News that despite Trump’s waffling on the DPA, “he signed it, and federal employees and the military now have a green light to move ahead.”

The DPA gives the federal government the power to incentivize, nudge and even push American companies to do things like increase production of medical supplies like ventilators, masks and protective gowns. The DPA also empowers the government to offer loans and loan guarantees to companies that currently manufacture emergency medical supplies, enabling them to dramatically increase production of those items.

Zakheim told Yahoo News the DPA could also give the Trump administration the authority to instruct companies like Prestige Ameritech — which reportedly has an order for 100 million masks from Taiwan, Hong Kong and Singapore — to prioritize orders for the American health care system.

The White House was reported to be discussing the DPA three weeks ago but never invoked it at that point. Zakheim told Yahoo News that Trump should already have invoked the DPA long before now.

“We’re behind the eight ball, because we’ve been reactive. Here’s an opportunity to be proactive — if you even want to call it proactive at this point,” Zakheim said in an interview.

The U.S. medical system has about 30 million N95 respirators for medical workers to wear while caring for the sick. One estimate is that the actual need in a worst-case scenario would be 300 million masks. The manufacturer 3M, which makes them, is already increasing its production.

There are about 160,000 ventilators, which assist sick patients with their breathing, but as many as 740,000 could be needed, according to one study.

On Thursday morning, Minnesota-based medical device manufacturer Medtronic — which produces a large share of the global supply of ventilators out of its plant in Galway, Ireland — announced it has already “increased production by more than 40 percent to date and is on track to more than double its capacity to manufacture and supply ventilators in response to the urgent needs of patients and healthcare systems across the globe.”

“The company currently has over 250 employees dedicated to ventilator manufacturing and plans to more than double that number, including transferring staff from other Medtronic sites to support ramp up activities,” Medtronic said in a statement. “Additional manufacturing shifts have been put in place and new manufacturing shift patterns are being introduced to bring the plant to 24/7 operation.”

Medtronic said it is “prioritizing high risk/high needs areas for ventilator allocation on a weekly basis for global distribution through its supply chain.”

Medtronic executive Bob White said that the company “recognizes the demand for ventilators in this environment has far outstripped supply.”

“No single company will be able to fill the current demands of global healthcare systems,” White said. “However, with all manufacturers increasing their production and through partnerships with governments, hospitals and global health organizations, Medtronic is committed to getting more ventilators into the market and to the right locations in the world to help doctors and patients dealing with COVID-19.”