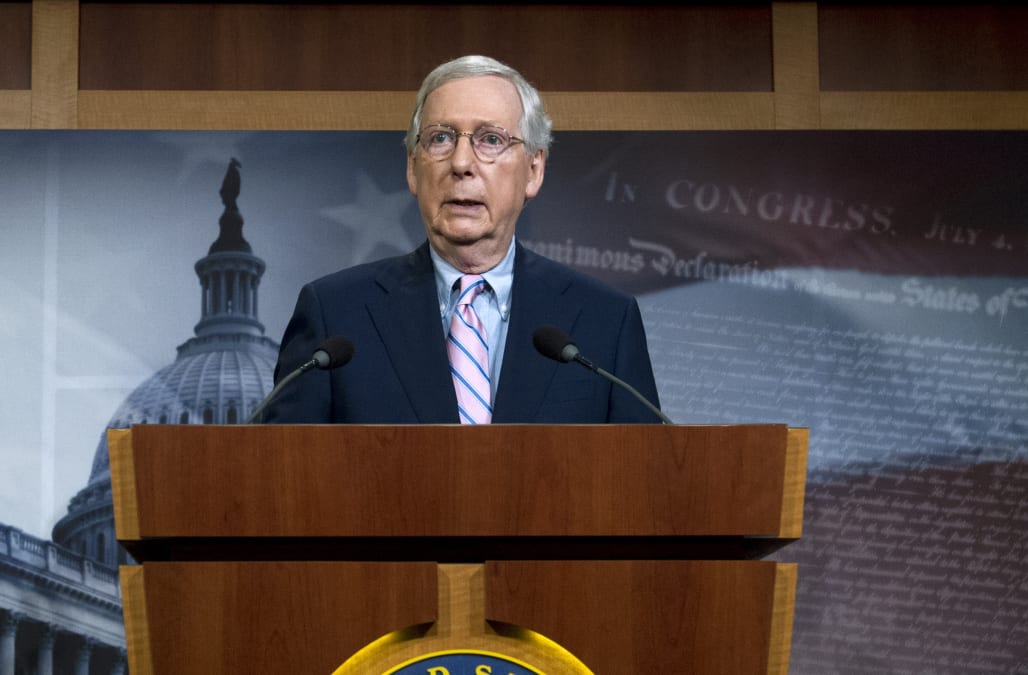 WASHINGTON — The Senate voted to approve a second coronavirus aid bill Wednesday, paving the way for lawmakers to turn their attention to a third proposal that could include direct payments to Americans.

The legislation, dubbed the Families First Coronavirus Response Act, passed in a 90-8 vote in the Senate, and President Donald Trump signed it into law Wednesday evening.

The bill provides free coronavirus testing and ensures paid emergency leave for those who are infected or caring for a family member with the illness. The bill also provides additional Medicaid funding, food assistance and unemployment benefits.

“We will continue to work on the next bill to respond to the crisis, and I want to repeat again that the Senate is going to stay in session until we finish Phase 3,” Senate Majority Leader Mitch McConnell, R-Ky., said on the chamber floor after the legislation passed. “I would recommend senators stay around, close. Just how long it will take to get through these steps is unclear, but as everyone knows, we are moving rapidly because the situation demands it.”

The House passed the sweeping bill with a bipartisan vote in the wee hours Saturday morning, but progress was stalled after Democrats and the Trump administration disagreed over how expansive paid leave should be.

The Trump administration voiced concerns that paid leave could overburden small businesses, and lawmakers made changes to limit who would be eligible; those changes passed the House Monday evening.

After the Senate passed the bill, House Speaker Nancy Pelosi, D-Calif., said her chamber and the Senate "are already hard at work on the third bill in the House’s Families First agenda, which will take bold, historic action on behalf of America’s workers and families. This bill will be crafted in consultation with the public health, labor, nonprofit and business communities, so that we can deliver the most effective, evidence-based response."

The aid package sent to Trump on Wednesday is the second emergency bill that Congress has passed in recent weeks. Last week, the Senate approved a $8.3 billion House-passed measure that focused on vaccine research and development.

With the passage of the second emergency bill on Wednesday, Senate Republicans are now turning their attention to what they are calling the third phase of the coronavirus response: a $1 trillion spending proposal from the White House that would include $500 billion in direct payments to Americans.

McConnell is expected to build consensus among Republicans on the economic stimulus before negotiating with Democrats, meaning that it is unlikely a bill will be introduced by the end of the week.

McConnell said Wednesday that senators would not leave Washington “until we deliver.”

Some Senate Republicans have expressed concern that the bill passed on Wednesday puts too much stress on small businesses, which will be required to provide paid leave to qualifying employees, and said more needed to be done to help those businesses stay afloat. Some GOP lawmakers have also suggested that they would prefer to see an emphasis in the stimulus proposal on making sure employers could meet payroll, rather than relying on the government to provide direct payments to Americans.

Republican Sens. Susan Collins of Maine and Marco Rubio of Florida announced Wednesday they are working on a proposal to give more aid to small businesses to help them pay their employees.

“I want to make sure that we provide a federally guaranteed loan that would allow [small businesses] to maintain their payrolls,” Collins said on Wednesday. “And it would keep those businesses alive so that when this crisis passes, the employees would have jobs to return to.”

In an effort to follow Centers for Disease Control and Prevention guidelines for social distancing, McConnell encouraged members ahead of Wednesday’s vote to “come in and vote and leave" to avoid any close contact while on the floor.

Trump also announced Wednesday that he is invoking the Defense Production Act to mobilize U.S. private production capacity to combat the coronavirus outbreak. Trump further said his administration is "suspending all foreclosures and evictions until the end of April" to help those affected by the virus.