Toilet paper and hand sanitizer aren’t the only items flying off store shelves as the coronavirus continues to spread across the country. Some gun and ammunition retailers say they’ve seen so much demand in recent weeks that they’re having trouble keeping their shops stocked, too.

HuffPost called dozens of brick-and-mortar gun shops around the country. The vast majority said they were too overwhelmed with customers to comment when we called.

“We’re out in the woods,” Bruneau told HuffPost. “We don’t get a ton of traffic, especially this time of year. We had like six or seven customers yesterday, that’s huge for us.”

It’s been difficult to restock the store, Bruneau said, because suppliers are struggling to manufacture enough product to meet demand. She said “tons of people” have been calling ahead to see what’s available.

“I think a lot of people are seeing what’s going on in the [grocery] stores and want to make sure they’ve got what they need if they’re in a bind. Who knows what people are going to do,” she added, referring to concerns about possible looting or other lawlessness in response to the pandemic.

People are also stocking up, as prices are expected to jump due to the higher demand, she said.

An employee at Oak Ridge Firearms in Oak Ridge, New Jersey, who asked not to be identified, said there’s been significantly more interest than normal from first-time buyers.

In New Jersey, which has some of the most restrictive firearm laws in the country, prospective first-time gun owners must apply for permits through the state police. It can take weeks for a permit to be issued, if at all.

“They call and have no idea what the process is,” the employee said. “They’re frustrated because they want something right now.” 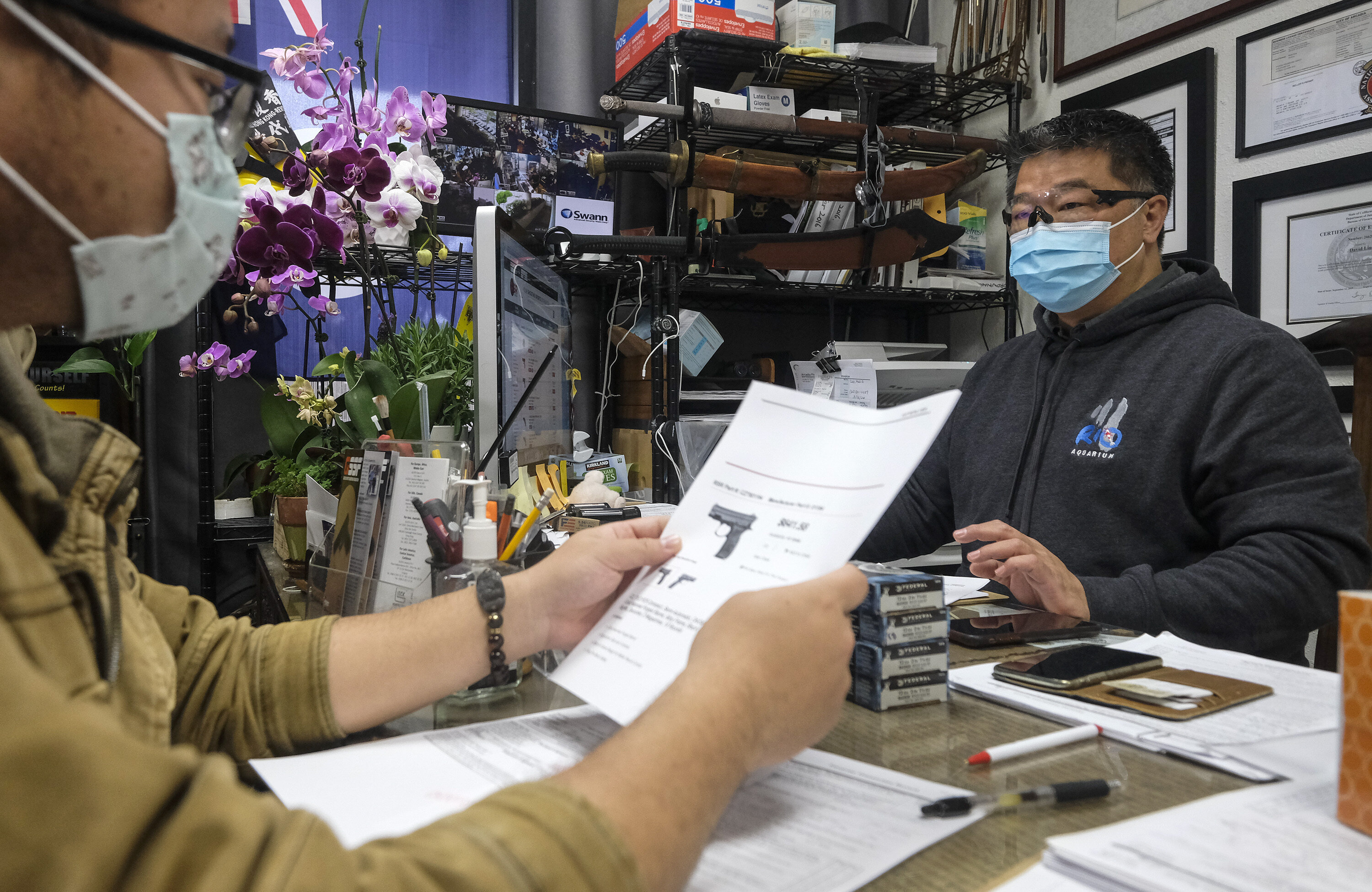 Like Carrara’s Gun Shop in Vermont, Oak Ridge Firearms has seen an increase in firearm purchases, particularly shotguns, but not as much as the demand for ammunition. The Oak Ridge employee estimated the shop has sold about three to four times the amount of ammo compared to this time last year.

“I can’t say I’ve ever seen something like this because of disease happening before,” he told HuffPost. “Some people are concerned there could be lawlessness.”

Firearm sales often spike after mass shootings, especially since the Sandy Hook Elementary School shooting in Newtown, Connecticut, in 2012, because some people fear the government will impose tighter gun restrictions in their aftermath.

But the boost in sales during the coronavirus pandemic is likely fueled in large part by concerns of social unrest, said Adam Winkler, a professor of constitutional law at the UCLA School of Law and an expert on gun policy. He said he’s not surprised to see lines out the door at some gun stores, and he expects sales to continue to grow as long as stores remain open.

When you depend on the government for social [stability] and all of a sudden it seems like the government isn’t going to be able to provide that, people get scared.Adam Winkler, gun policy expert and UCLA School of Law professor

“We have seen this before,” Winkler said. “We saw in Los Angeles when the riots occurred back in the early 1990s, a lot of people were purchasing guns. When people feel a crisis is coming and social order may be disrupted, being armed and self-defense is an age-old idea.”

While mass shootings mostly drive existing gun owners to add to their stockpiles, first-time buyers are likely a “large slice of the pie” of the sales amid the coronavirus spread, Winkler said.

“People do sometimes choose to buy guns when they’re facing the possibility of social breakdown ― and sometimes for good reason,” Winkler said, noting the looting and crime that occurred in New Orleans during and after Hurricane Katrina in 2005.

“It shows that there is this primal need for self-defense,” he added. “When you depend on the government for social [stability] and all of a sudden it seems like the government isn’t going to be able to provide that, people get scared.”

Though self-protection may be a motive for many gun buyers, studies show that living in a house with a gun increases the risk of death. Homicides and suicides are far more likely to occur when a gun is present in a household, according to a 2014 study published in the Annals of Internal Medicine.

Having a gun in the house also increases the potential for a deadly accident. Firearms are the second leading cause of death among American children and adolescents, behind car crashes. At least 73 children under the age of 12 were accidentally killed by guns in 2018. Those gun deaths were often related to a child’s access to a firearm, and were either self-inflicted or at the hands of another child, according to the Children’s Hospital of Philadelphia Research Institute. 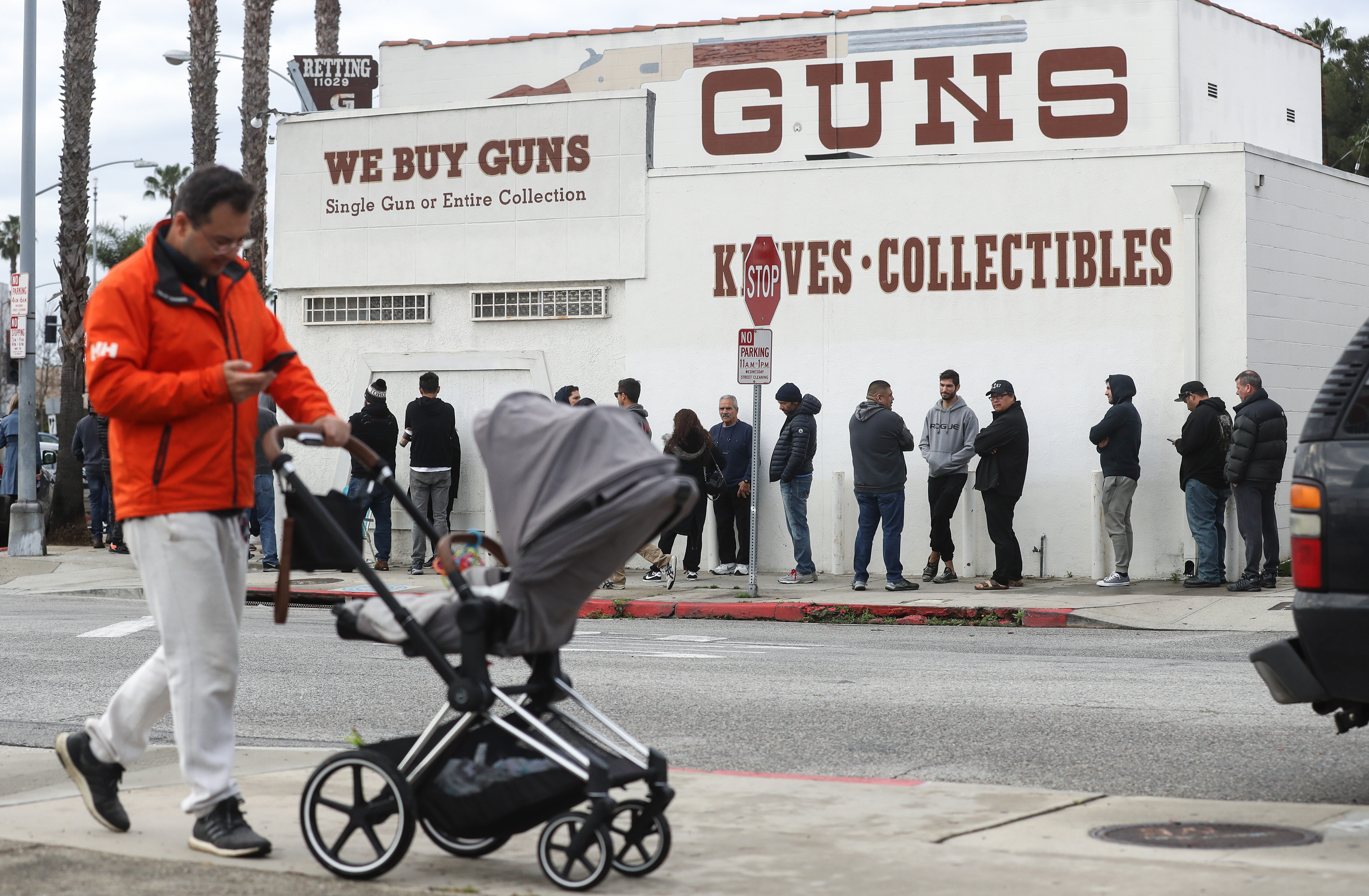 The first confirmed case in the U.S. of COVID-19, the disease caused by the novel coronavirus, was reported on January 21. As of Monday, the virus had infected nearly 3,500 people across 49 states, as well as Washington, D.C., Puerto Rico, Guam and the U.S. Virgin Islands. At least 68 people in the U.S. have died from COVID-19.

Reports about increased firearm and ammo sales in the last month are largely anecdotal. The FBI’s monthly report on firearm background checks initiated through the NICS system is often a strong indicator of whether gun sales have increased in a given period of time. At the time of publication, the FBI had not yet posted numbers for March.

Background checks are required when a person is seeking to purchase a gun from a federal firearms licensee, which includes major chains like Walmart, small independent shops, and some individual retailers.

A spokeswoman for the FBI would not speculate on the possible causes for an increase in background checks.

“There are many factors that could cause fluctuations at any time,” she said. Ammo.com, an online retailer of ammunition, said it’s seen a surge in sales that correlates with the spread of the coronavirus. Sales in Delaware have grown by more than 4,500% ― the most of any state, according to the website. Customers in Vermont, Maryland, Mississippi and Louisiana, where confirmed cases of the virus have steadily increased, have also placed substantially more orders than normal.

“On March 10, 2020 – the day confirmed cases in the US reached over 1,000, increasing ten-fold in a week – we noticed an unprecedented 276% sales surge that continued through the end of last week and the weekend,” Ammo.com said in a statement.

The site said it has seen increases in sales in every single state, with the exception of those to which they don’t ship: Alaska, California and Hawaii.

Lines have wrapped around some firearms stores in California, with customers waiting hours at times to get inside, reported The Los Angeles Times.

Ray, a medical doctor who only provided his first name to the Times, was one of several first-time buyers waiting in line last week at Martin B. Retting Gun Shop in Culver City.

“I want to buy a handgun, I think they call it a Glock, but I’m not sure,” he said. “I have a house and a family, and they’ll need protection if things get worse.”