States scramble to address coronavirus concerns ahead of Tuesday's primary 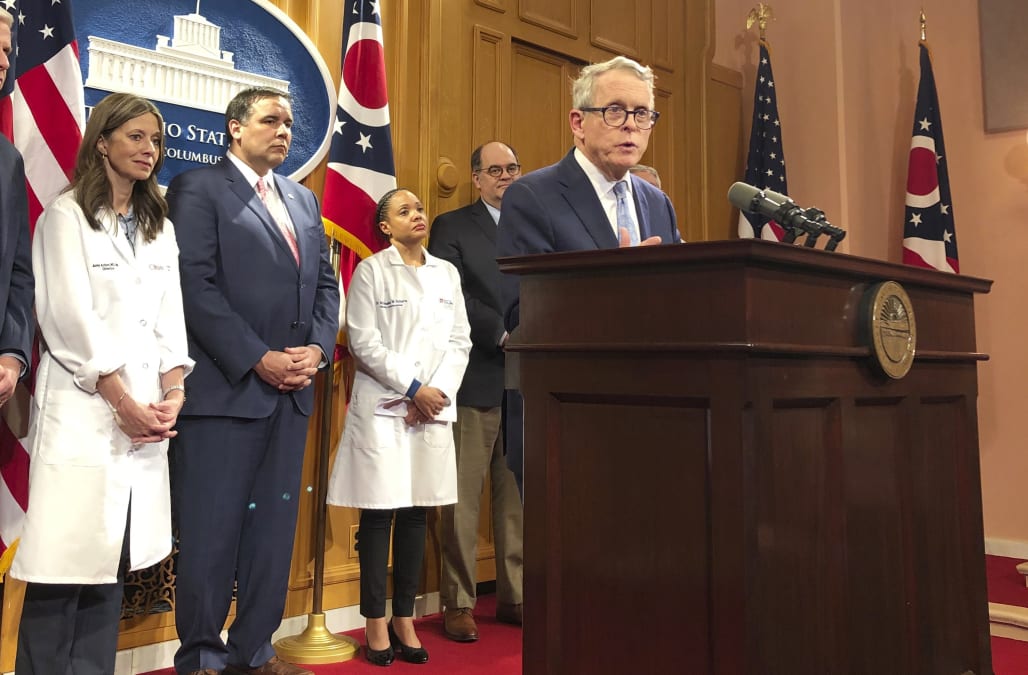 WASHINGTON — Elections officials in several states scrambled Monday to adjust the way they will hold primary contests on Tuesday, seeking to balance the competing priorities of preserving access to the voting booth and protecting voters and volunteers from the coronavirus.

On Monday, Ohio Gov. Mike DeWine recommended that his state push back its primary to June 2. He asked that the state judiciary rule in favor of a lawsuit postponing the primary.

“We cannot conduct this election tomorrow,” DeWine, a Republican, said at a midafternoon press conference. “We should not force [voters] to make this choice, a choice between their health and their constitutional rights and their duties as American citizens.”

DeWine said absentee voting would continue until June 2, under his recommendation, and that in-person voting would take place on that day.

DeWine’s announcementraised immediate questions about whether Florida, Illinois and Arizona would go forward with their primaries on Tuesday.

A spokesperson for Florida Gov. Ron DeSantis told Yahoo News on Monday that the state was still not considering postponing its primary. Late last week DeSantis insisted his state would go forward with its primary. “We’re definitely voting. They voted during the Civil War. We’re going to vote,” he said at a press conference on Friday.

After the Ohio announcement had been made, a spokesperson for the Arizona secretary of state’s office told Yahoo News that the state was going forward with its primary. In Kentucky, meanwhile, Secretary of State Michael Adams announced Monday afternoon that he is recommending that the commonwealth’s primary be moved back from May 19 to June 23.

In Ohio, DeWine said one of the main reasons he recommended postponing the primary was because many polling places would draw more than 50 people at one time, exceeding the guidelines released Sunday by the Centers for Disease Control and Prevention.

“It is clear that tomorrow’s in-person voting does not conform and can’t conform with these CDC guidelines,” DeWine said.

The White House released its own guidelines on Monday afternoon recommending no gatherings of more than 10 people.

For the states still voting on Tuesday, they confronted a dual challenge: protecting the health of voters and poll workers while still making it possible to vote.

Juan Peñalosa, executive director of the Florida Democratic Party, told Yahoo News that his group was “educating voters about polling location changes, contacting voters digitally and through text instead of door knocking, and assisting voters through our voter protection hotline.”

Voters affected by the change in polling locations are being asked to travel to other polling stations in their county. But according to Katherine Sutherland, MD, the chair of the Polk County (Florida) Democrats, moving voters around like this could result in larger crowds at polling stations.

The CDC says that Americans should avoid crowds of larger than 50 people due to the pandemic. Sutherland says it would be difficult, however, to keep the crowds that small at polling stations. And the risk of potential exposure in these now packed precincts could discourage voters from showing up.

Sutherland said that her county has been taking cues from the state party and has discontinued a majority of its last-minute get-out-the-vote initiatives, such as door-to-door canvassing and voter registration events. Primary watch parties in Polk County have been canceled as well.

Sutherland also said she was disappointed that the state did not delay its primary and suggested that election outcomes might be skewed since older voters could be less inclined to leave their homes.

“Well this has really very quickly thrown us off,” she said. “It’s hard to predict how this is going to affect outcomes, but it’s certainly going to affect turnout. Again, the elderly have been warned that they have been at highest risk and I expect they will be the most likely to stay home, and that’s a huge voting bloc.

“We may see that younger people are more likely to turn out — that could affect the ultimate result of the election. So it’s a concern. In some respects, I’m disappointed that Florida did not take the steps that Georgia and other states did to postpone the primary. I think it’s too late now. This is a crisis in so many ways, but it is a crisis for our voting procedures.”

Joe Biden is projected to win the state if voting trends from earlier primaries continue. Older voters, especially older African-American voters, saved Biden’s campaign from the brink of collapse in last month’s South Carolina primary and have been a reliable voting bloc for him in the contests that followed.

Older voters are projected to support Biden in Florida too, though Bernie Sanders might have an edge in the delegate-rich state if they stay home and younger voters feel well enough to venture out. Young voter turnout increased 12 points from 2016 to 2018 in Florida, though totals were still far below every other age bracket.

Sutherland is at a loss for how her precincts and others across the state can accommodate the needs of older voters on such short notice. She is encouraging copious use of hand sanitizer, social distancing of at least 6 feet among voters, and discouraging public activity if a voter is ill.

“It absolutely can be catastrophic. I don’t know what else to do. It would take a major state decision — and it has to come from the Department of State, not from either party. We don’t have a lot of control, and I don’t know if anybody has a lot of really good ideas on what to do.”

Meanwhile, officials in Illinois claim that mail-in and early voters are on track to surpass figures from 2016, according to the Chicago Tribune. Cook County, where Chicago is located, had extended weekend hours at suburban early voting locations, County Clerk Karen Yarbrough told the paper.

“There are plenty of organizing tactics available that don’t involve in-person contact such as phone banking, texting out the vote and other virtual communications practices,” Mayor Lori Lightfoot said over the weekend. “This is a time to put safety over politics.”

The Illinois Democratic Party did not return requests for comment.