Fauci open to a 14-day 'national shutdown' to stem virus 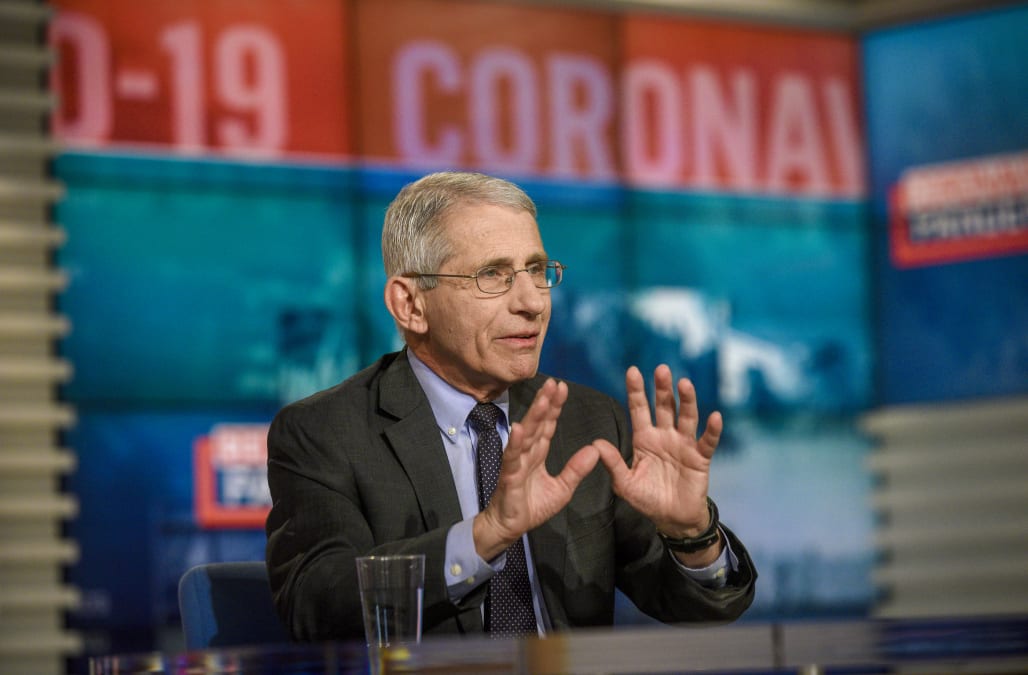 WASHINGTON (AP) — The government’s top infectious disease expert said Sunday he would like to see aggressive measures such as a 14-day national shutdown that would require Americans to hunker down even more to help slow spread of the coronavirus.

Still, Dr. Anthony Fauci said travel restrictions within the United States, such as to and from hard-hit Washington state and California, probably will not be needed anytime soon.

Fauci, the public face of the administration's messaging during a round of morning TV interviews, said the country should do as much as “we possibly could,” even if officials are criticized for “overreacting.” He said he raised the issue of measures such as a shutdown with the Trump administration, and said it has been open to his ideas.

“I think Americans should be prepared that they are going to have to hunker down significantly more than we as a country are doing,” said Fauci, a member of the White House task force on combating the spread of coronavirus. He heads the National Institute of Allergy and Infectious Diseases at the National Institutes of Health.

Fauci said the elderly and those with underlying medical conditions should already be hunkering down, but other Americans, too, should consider “much more” restrictions on outside activity, from work and travel to possibly eating at restaurants.

“Everybody has got to get involved in distancing themselves socially,” Fauci said.

“Everything is on the table,” he said. “Right now, myself personally, I wouldn't go to a restaurant. I just wouldn't because I don't want to be in a crowded place. ... I don't want to be in a situation where I’m going to be all of a sudden self-isolating for 14 days.” The virus has an incubation period of anywhere from two days to 14 days before symptoms emerge.

For most people, the new coronavirus causes only mild or moderate symptoms, such as fever and cough. For some, especially older adults and people with existing health problems, it can cause more severe illness, including pneumonia. The worldwide outbreak has sickened more than 156,000 people and left more than 5,800 dead. The death toll in the United States has reached more than 50, while infections neared 3,000 across 49 states and the District of Columbia.

President Donald Trump last week announced a sweeping travel ban for much of Europe. On Saturday, he added the United Kingdom and Ireland to a list of countries that would face travel restrictions over the next 30 days. The State Department on Sunday said it would allow U.S. personnel to leave their diplomatic or consular posts worldwide if they or family members were medically determined to be at a higher risk of falling very ill if exposed to the virus.

Trump also has pledged broadened U.S. testing for the virus as major employers such as Apple Inc. have sent workers home to telework and several states and big cities, including Los Angeles and Boston, shuttered down schools for a week or more.

In the nation's capital, White House officials said Trump tested negative for the virus over the weekend after he was recently in contact with three people at his Florida resort who tested positive, and several lawmakers in recent days have said they were self-quarantining out of an abundance of caution.

House Speaker Nancy Pelosi, D-Calif., said Congress has started work on a new aid package after the one just approved by the House early Saturday. The new one would provide direct relief to Americans suffering physically, financially and emotionally from the coronavirus pandemic.

With the U.S. Capitol among the many iconic landmarks closed to tours, Pelosi also urged lawmakers to have most of their Washington staff telework from home, as health officials urge social distancing. House lawmakers are away on weeklong recess and many have already curtailed office visits at their local offices, as well.

Democratic Rep. Adam Schiff, chairman of the House Intelligence Committee, on Sunday said a former staff member tested positive for the virus. The staffer, Daniel Goldman, the attorney who led Democratic questioning during the House impeachment hearings, had left the office 10 days ago and he's believed to have contracted the virus after his departure.

“We will still be taking additional precautions over the next few days,” Schiff said. “The former staffer is feeling better and no current staff have reported any flu-like symptoms at this time.”

NIH reported Sunday that one of its staff working in its division on arthritis and musculoskeletal and skin diseases had tested positive for COVID-19, its first case. NIH said the person was not involved in patient care and was now quarantined at home and "doing well.”

Trump has suggested that restrictions on travel within the U.S. to areas hit hard by the coronavirus pandemic could be next. But Fauci on Sunday played down that or having major national lockdowns on the level now seen in European countries such as Italy and Spain.

“We feel that with rather stringent mitigation and containment, without necessarily complete lockdown, we would be able to prevent ourselves from getting to where, unfortunately, Italy is now,” Fauci said.

“With regard to domestic travel bans, we always talk about it, consider everything. But I can tell you that has not been seriously considered, doing travel bans in the country. ... I don't see that right now or in the immediate future.”

At the White House, Trump on Sunday held a call with more than two dozen grocery store and supply chain executives to discuss their response to coronavirus outbreak. Retailers have reported seeing a crush of shoppers flocking to stores to stock up on food and other essentials. Consumers have expressed frustration that some items — such as hand sanitizer and toilet paper — are becoming more difficult to find. During the call, Trump expressed appreciation for their work to ensure food stocks are “constantly available” so “Americans feel calm and safe when shelves are stocked with the items they need,” according to White House spokesman Judd Deere.

“Supply chains in the United States are strong, and it is unnecessary for the American public to hoard daily essentials,” Deere said.

Still, more than the crisis was on Trump's mind. He tweeted that he was considering a full pardon for Michael Flynn, his disgraced former national security adviser, and he directed barbs at a familiar target, Senate Democratic leader Chuck Schumer of New York.

White House economic adviser Larry Kudlow expressed confidence that supply lines such as food for stores will be largely unaffected by the virus outbreak.

“Most of America is still working," he said. "Factories are not shutting down across the country, at least not yet.”

Trump, who declared Sunday a National Day of Prayer, said he tuned in to the live stream from the Free Chapel, a Gainesville, Georgia evangelical church led by Jentezen Franklin.

“I am watching a great and beautiful service by Pastor Jentezen Franklin. Thank you!” Trump tweeted.

Vice President Mike Pence, who leads the White House task force, said he planned to disclose more details about a web site being developed by Verily, a subsidiary of Google’s parent company, that is being designed to help communities assess and direct Americans to sites conducting coronavirus screening.

Trump on Friday announced the imminent rollout of a website “facilitated” by Google that would guide users through a series of questions to determine whether they should be screened for the virus. The company, however, has said that the web site was in early stages of development and would be focused on the San Francisco Bay Area.

More from Aol.com:
Travelers face airport chaos as U.S. tries to implement coronavirus screening
Will coronavirus go away in the spring? Maybe — but it also might come back in fall.
Cities turn to a new model of coronavirus testing: Drive-throughs