Biden, Sanders to debate against backdrop of global pandemic 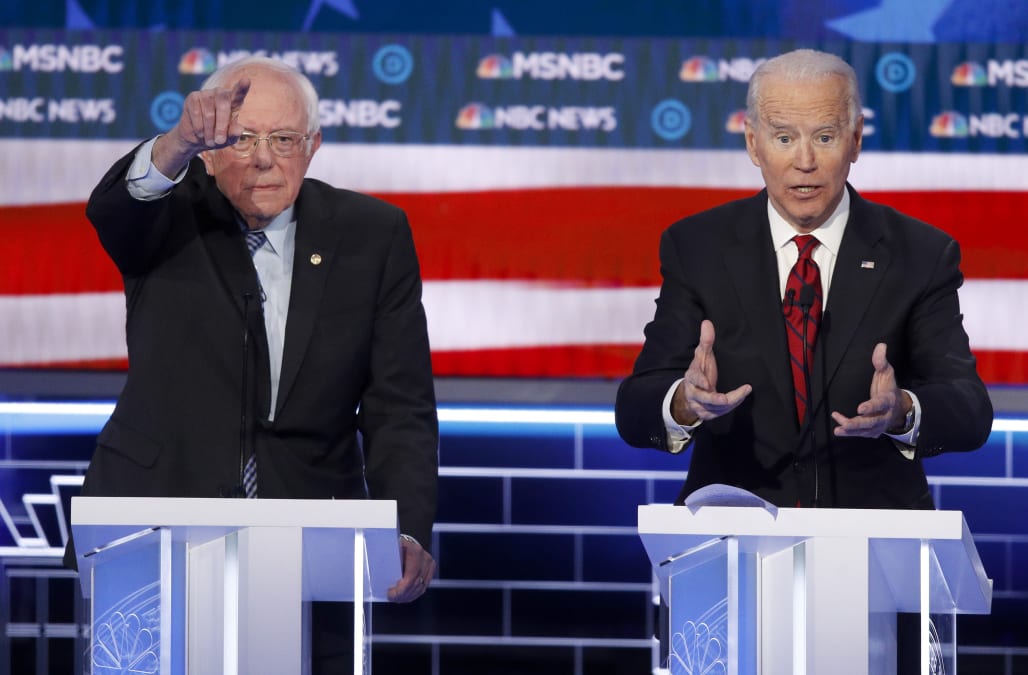 WASHINGTON (AP) — When the two remaining Democratic presidential candidates return to the debate stage Sunday night, they will find that their party, the political stakes and the world look much different from when they last met less than three weeks ago.

The fast-moving coronavirus was something of an afterthought in that debate. Now the escalating crisis is likely to dominate it. Rising infections in the United States and around the world have prompted a dramatic slowdown of global travel, upended financial markets, and raised questions about President Donald Trump’s ability to lead the nation through a prolonged period of uncertainty.

Just two Democrats — former Vice President Joe Biden and Vermont Sen. Bernie Sanders — remain to make the case that they are best-positioned to challenge Trump in November. Five other candidates who joined them on stage in the Feb. 25 debate in South Carolina have dropped out, with many rallying behind Biden’s surging candidacy.

For both Biden and Sanders, the debate is a moment to display their leadership skills in front of what could be one of the largest audiences of the primary. They’ll aim to draw a contrast with Trump, but also with each other, arguing that they have the right experience, temperament and policy prescriptions to lead the nation through a crisis.

“Moments like these don’t come around often in campaigns and this is a perfect opportunity to show millions that you have what it takes,” said Robert Gibbs, former White House press secretary and campaign adviser to President Barack Obama. “They must show voters they are the answer to what is missing right now by being calm, honest, ready to lead and empathetic.”

The coronavirus crisis rapidly upended plans for Sunday’s debate. First, the Democratic National Committee announced that it would hold the contest without a live audience. Then the debate was moved from a large venue in Arizona, one of the states holding a primary Tuesday, to a television studio in Washington because of concerns about cross-country travel. One of the moderators had to withdraw because of potential exposure to a person who tested positive for coronavirus.

It is Biden who will step on stage as the front-runner, a distinction that seemed unlikely just a few weeks ago. After disappointing showings in the early contests, Biden roared back with a commanding victory in South Carolina and has continued to rack up wins across the country, winning broad and diverse coalitions of voters. Moderate Democratic leaders, including former rivals Amy Klobuchar and Pete Buttigieg, have rallied behind his candidacy and voters have done the same.

Advisers say Biden will aim in Sunday's debate to show voters who backed Sanders or other liberal candidates that they have a home in his campaign. In one overture to liberals, Biden announced his support for a bankruptcy plan championed by Massachusetts Sen. Elizabeth Warren, who ended her campaign earlier this month and has yet to endorse.

In a virtual town hall on Friday, Biden said his support for Warren's proposal, which aims to simplify the bankruptcy process, is "one of the things that I think Bernie and I will agree on."

Biden holds a solid lead over Sanders in the all-important delegate race, and a strong showing in Tuesday’s primary contests could effectively guarantee his nomination. Four big states will be up for grabs: Illinois, Ohio, Arizona and Florida, a perennial general election battleground where Biden appears to have an edge over Sanders.

After a strong start, the race has moved rapidly away from Sanders, a self-described democratic socialist with a loyal following among young voters and liberals. But he’s failed to expand his appeal, particularly among black voters, and his calls for a sweeping political and economic revolution have also fallen flat with suburban voters.

Sanders is facing some pressure from within the Democratic Party to step aside and allow Biden take Trump on one-on-one. Several Democratic groups that were waiting to endorse until after the primary have consolidated around Biden, including super PAC Priorities USA.

Sanders’ advisers say he is a realist about his current standing and the difficulty of the path ahead. Yet the senator is pledging to grill Biden in Sunday’s debate on his plans for tackling college debt, for his past support of the Iraq war and for his backing of multilateral trade agreements.

“I’m going to ask Joe Biden, I mean Joe is part of the establishment for a very long time, ‘Joe, what role have you played in trying to make sure that we end this massive level of income and wealth inequality where three people own more wealth than the bottom half of America?" Sanders said Saturday during an online “fireside chat” with supporters.

Yet it’s unclear if the issues Sanders is aiming to highlight will resonate with voters at a time when much of the nation’s focus has shifted to the growing toll of the coronavirus and put a spotlight on the need for presidential leadership. Schools and businesses across the country are closed, and many hospitals and clinics are struggling to obtain tests for the coronavirus.

For most people, the new coronavirus causes only mild or moderate symptoms, such as fever and cough. For some, especially older adults and people with existing health problems, it can cause more severe illness, including pneumonia. The vast majority of people recover from the new virus. According to the World Health Organization, people with mild illness recover in about two weeks, while those with more severe illness may take three to six weeks to recover.

For Biden, the outbreak of a global pandemic has been a moment to bolster the central argument of his candidacy: that his eight years as vice president give him the experience, as well as the relationships in Washington and around the world, that are needed in the Oval Office during turbulent times.

With campaign rallies halted because of warnings against large gatherings, Biden delivered a speech in front of reporters and advisers on his proposal for combating coronavirus, including guaranteeing free testing. Sanders’ later announced his own speech, which focused largely on advocating for his call to overhaul the nation’s health insurance system and replace it with a Medicare for All program.

After Sunday’s debate, it’s unclear where the candidates and the campaign go from here. Neither Biden or Sanders has announced any public rallies for next week or given any indication of when they may be able to appear in person for voters again.

Associated Press writer Will Weissert contributed to this report.