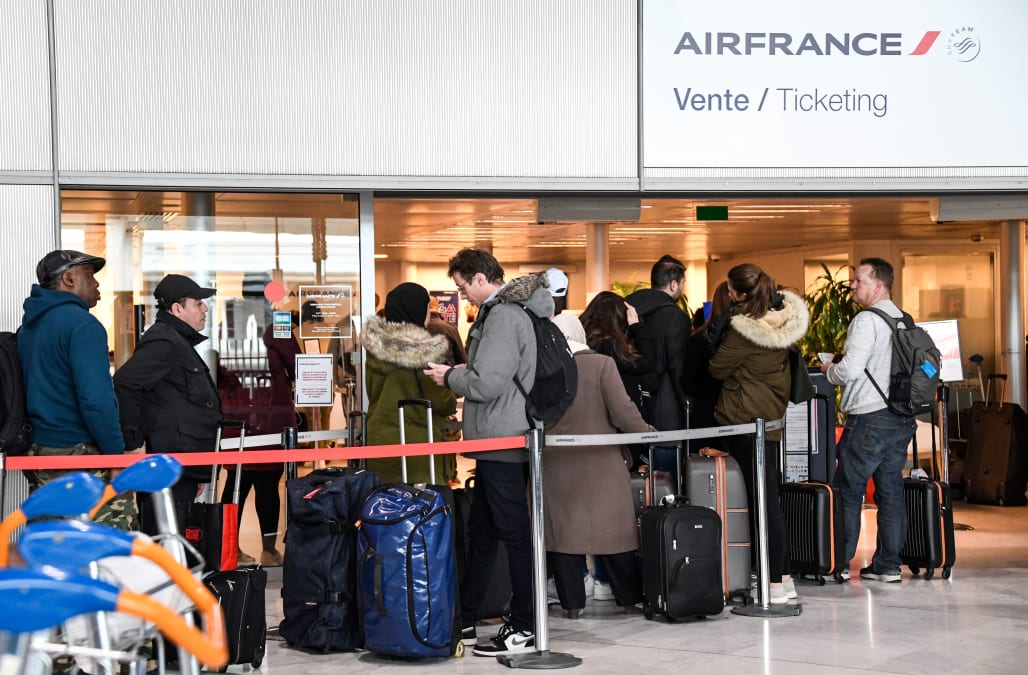 LONDON — President Donald Trump's ban on most travel from 26 European countries caused uproar on the continent early Thursday, with E.U. leaders blasting Trump's decision and saying they were not consulted, and chaos and confusion erupting at several major airports.

European Union leaders issued a rare joint statement condemning Trump's move, saying it was taken "unilaterally and without consultation." They also condemned attacks he made on them during an address the night before, when Trump accused the E.U. of spreading the virus in the U.S. by not imposing sufficient travel restrictions on China and elsewhere.

"The coronavirus is a global crisis, not limited to any continent and it requires cooperation rather than unilateral action," said a joint statement from Ursula von der Leyen and Charles Michel, presidents of the European Commission and European Council respectively.

"The European Union disapproves of the fact that the U.S. decision to impose a travel ban was taken unilaterally and without consultation," they added. "The European Union is taking strong action to limit the spread of the virus."

Meanwhile, Americans and foreigners scrambled to work out what it meant for their plans to travel to the U.S. Others questioned the logic of Trump's move, and whether it would actually help the effort to slow down the spread of the deadly contagion.

The president announced late Wednesday he was banning travel to the U.S. for any foreign nationals who had traveled to more than two dozen European countries within the past 14 days.

Trump explicitly called it a "foreign virus" and that "a large number of new clusters in the United States were seeded by travelers from Europe."

The U.S. has 1,321 confirmed cases as of Wednesday, with the Trump administration coming under enormous criticism for the lack of coronavirus testing that's being done compared with certain other countries.

The travel ban goes into effect Friday at midnight and the restrictions apply only to foreign nationals, not U.S. citizens, green card holders or the families of U.S. citizens.

However, during the president's initial verbal address to the nation, these distinctions were less clear, with Trump saying the U.S. would "be suspending all travel from Europe to the United States for the next 30 days."

He did add that "there will be exemptions for Americans who have undergone appropriate screenings" — but that appeared to do little to temper the confusion and alarm at several European airports.

"I see Americans crying at the airport right now worried about their jobs and coming home," Muhammad Alameldin, 24, told NBC News from the airport in Barcelona, Spain.

He and his fiancee, Monique Sanchez, 24, who are from Berkeley, Ca., woke up to the news at 6 a.m. before heading to the U.S. Consulate and then, when that produced no results, the airport.

"My flight was cancelled and I've been in line for over three hours waiting to transfer or get a voucher for my flight," he said. "No one has heard or seen anything thus far. It's a failure in US policy and shows that the president doesn’t know how to take care of Americans abroad."

NBC News journalist Shannon Ho was at Berlin-Tegel Airport, in Germany, returning home from vacation hours after the move was announced. "Lots of chaotic energy in Tegel right now," she said. "Americans are stressed and just trying to get home," she added, after speaking with several U.S. citizens there amid the panic.

Ho met with one American who woke up his boss at 3 a.m. demanding his Saturday flight be rescheduled. Another Tesla worker cut short their trip by three weeks. And another young man found out about Trump's announcement while at a Berlin nightclub.

"He essentially left, booked this flight en route to his hostel, and came straight" to the airport, she said.

Bedlam at U.S.-bound airlines at CDG in Paris early this a.m., as Americans pay as much as $20,000 for last-minute flights. pic.twitter.com/kkbOAEFn4Y

Elsewhere, travelers reported long lines of Americans trying to get home at Paris-Charles de Gaulle airport. New York Times reporter Mike McIntire described the situation as "bedlam" and said Americans were paying as much as $20,000 for a ticket home.

At Amsterdam's Schiphol airport — which normally has 200 flights to the U.S. every week — there were long lines at the KLM desk as passengers tried to get more information, airport spokeswoman Madelon van der Hof confirmed to NBC News by telephone.

"We are now mapping out, together with the airlines, what this means exactly for flights to the U.S.," the airport said in a written statement.

The restrictions affect countries within the Schengen Area — named after the Luxembourg town where the agreement was signed in 1985. This is a group of countries where it's possible to travel between without a passport. (That's the theory, although there are some rolling restrictions in place between certain countries following factors such as terror attacks in recent years.)

Schengen is different from the European Union; Ireland is not a member, and although the United Kingdom recently left the E.U. it was never part of this club either. As such, both these countries were exempt from Trump's travel ban.

That has led some to question whether it would be possible to get past the restrictions simply by connecting in London or Dublin. The statement released by Trump did not answer this point.

Furthermore, both the U.K. and Ireland have more cases, 459 and 43 as of Wednesday respectively, than many countries that were included within the ban. Slovakia for example has 10 confirmed cases, and Poland has 41.

A study published last week in Science Magazine, a peer-reviewed academic journal, found that travel restrictions "will have modest effects" and that other domestic measures to try to prevent the spread would "provide the greatest benefit to mitigate the epidemic."

That was echoed by the U.K.'s finance minister, Rishi Sunak, early Thursday.

Following the travel ban @realDonaldTrump announced, we will assess the situation today.

Economic disruption must be avoided. #Europe is taking all necessary measures to contain the spread of the #COVID19 virus, limit the number of affected people and support research.

"With regard to flight bans, we are always guided by the science as we make our decisions here," he told the BBC. "The advice we are getting is that there isn't evidence that interventions like closing borders or travel bans are going to have a material effect on the spread of the infection."

Michel, president of the European Council, tweeted that "we will assess the situation today" following Trump's announcement.