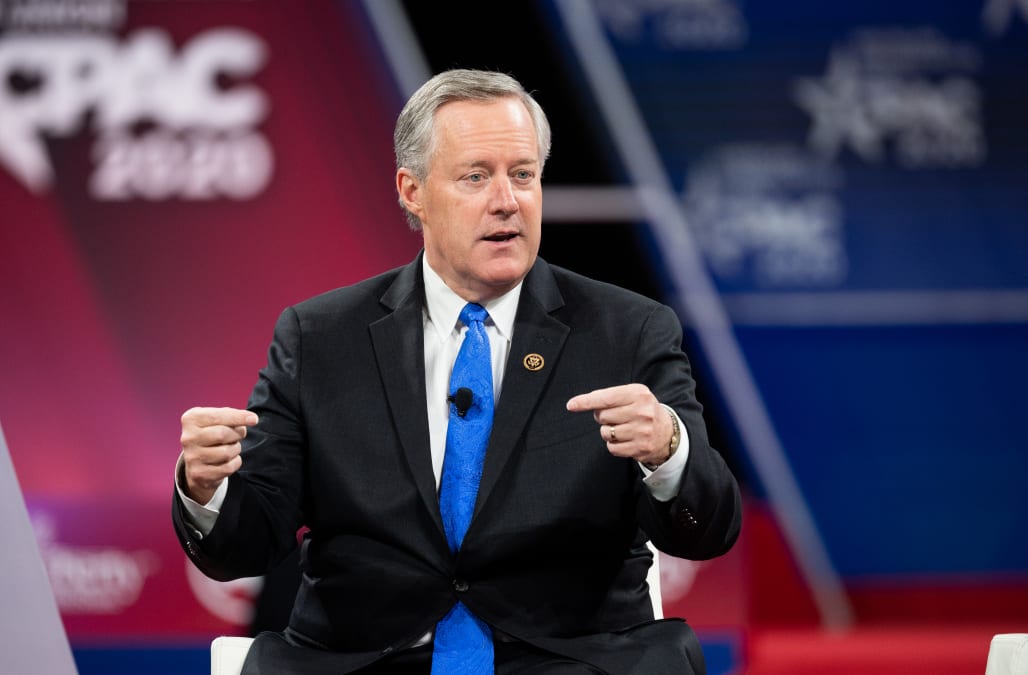 WASHINGTON – President Trump is getting (another) new chief of staff. Trump announced the move in a pair of tweets on Friday evening revealing he would replace Acting Chief of Staff Mick Mulvaney with Rep Mark Meadows, R-N.C. It’s a switch that replaces Mulvaney, whose relationship with the president had become strained, with one of Trump’s closest allies in Congress. In his tweets, Trump emphasized his strong rapport with Meadows.

“I am pleased to announce that Congressman Mark Meadows will become White House Chief of Staff. I have long known and worked with Mark, and the relationship is a very good one,” Trump wrote, adding, “I want to thank Acting Chief Mick Mulvaney for having served the Administration so well. He will become the United States Special Envoy for Northern Ireland. Thank you!”

Notably, Trump indicated Meadows would receive the official chief of staff title. Mulvaney, who assumed the role in January, 2019, had always been referred to as the “acting chief of staff.” Shortly after Mulvaney took on this role, which is one of the most powerful positions in the White House, an official spoke to reporters and said his title had the “acting” designation simply “because that’s what the president wants.”

Mulvaney, a former congressman, also served as director of the Office of Management and Budget and as acting head of the Consumer Financial Protection Bureau. In his time in the chief of staff role, Mulvaney never shed the interim title and he reportedly fell out of the president’s favor last year. Multiple sources said Trump was particularly displeased with a briefing Mulvaney gave to reporters last October as the scandal over aid to Ukraine was growing. During the press conference, Mulvaney indicated Trump’s desire to see Ukraine investigate business dealings former Vice President Joe Biden’s son had in the country was part of his reason for withholding aid. Trump allies felt Mulvaney’s comments complicated the efforts to defend against the allegation the pressure on Ukraine was an improper quid pro quo. That accusation was central to Democrats’ ultimately unsuccessful impeachment bid against the president.

Rep. Mark Meadows (R-NC)
WASHINGTON, DC - FEBRUARY 27: U.S. Rep. Mark Meadows (R-NC) speaks during a hearing as Michael Cohen, former attorney and fixer for President Donald Trump, testifies before the House Oversight Committee on Capitol Hill February 27, 2019 in Washington, DC. Last year Cohen was sentenced to three years in prison and ordered to pay a $50,000 fine for tax evasion, making false statements to a financial institution, unlawful excessive campaign contributions and lying to Congress as part of special counsel Robert Mueller's investigation into Russian meddling in the 2016 presidential elections. (Photo by Alex Wong/Getty Images)
Mark Meadows, congressional candidate from North Carolina speaks at the second session of the 2012 Republican National Convention at the Tampa Bay Times Forum in Tampa, Tuesday, August 28, 2012. (Harry E. Walker/MCT via Getty Images)
Rep. Mark Meadows, R-N.C, center, Rep. Tom Graves, R-Ga., right, and other conservative Republicans discuss their goal of obstructing the Affordable Care Act, popularly known as Obamacare, as part of a strategy to pass legislation to fund the government, on Capitol Hill in Washington, Thursday, Sept. 19, 2013. (AP Photo/J. Scott Applewhite)
Representative Mark Meadows, a Republican from North Carolina, listens as comments made by Representative Rashida Tlaib, a Democrat from Michigan, not pictured, are reviewed a House Oversight Comittee hearing with Michael Cohen, former personal lawyer to U.S. President Donald Trump, not pictured, in Washington, D.C., U.S., on Wednesday, Feb. 27, 2019. Cohen brought documents to Wednesday's congressional hearing to back up his case that his former boss is a 'con man' and 'a cheat.' Photographer: Al Drago/Bloomberg via Getty Images
Del. Eleanor Holmes Norton, D-D.C., left, and House Government Operations subcommittee Chairman Rep. Mark Meadows, R-N.C. talk on Capitol Hill in Washington, Thursday, May 12, 2016, prior to the subcommittee's hearing on whether the District of Columbia government truly has the power to spend local tax dollars without approval by Congress. (AP Photo/Andrew Harnik)
Representative Mark Meadows, a Republican from North Carolina, questions witnesses during a House Oversight and Government Reform Committee hearing in Washington, D.C., U.S., on Wednesday, Nov. 13, 2013. Republican lawmakers criticized potential security flaws in the U.S. health exchanges as Obama administration officials said they have made protecting customer privacy a top priority in their efforts to fix the website. Photographer: Pete Marovich/Bloomberg via Getty Images
FILE - In this Sept. 26, 2014 file photo, Rep. Mark Meadows, R-N.C. speaks in Washington. Sen. Ted Cruz’s rivals like to say he doesn't have any friends in Washington. Despite a distinct lack of support from Senate colleagues _ not one single endorsement, the Republican presidential candidate and freshman Texas senator has a small but loyal group of supporters in the House who are flying to rallies, meeting with voters and trying to convince the electorate that he's not such a bad guy. Meadows says he's traveled to Cruz events "to really tell the personal side of Ted Cruz that not many people know." (AP Photo/Manuel Balce Ceneta, File)
Republican House Oversight Committee and Government Reform Committee members, from left, Rep. Ron DeSantis, R-Fla., Rep. Mark Meadows, R-N.C., and Rep. Thomas Massie, R-Ky., listen on Capitol Hill in Washington, Thursday, July 7, 2016, as FBI Director James Comey, right, testifies before the committee's hearing to explain his agency's recommendation to not prosecute Democratic presidential candidate Hillary Clinton over her private email setup during her time as secretary of state. (AP Photo/J. Scott Applewhite)
House Oversight Committee member Rep. Mark Meadows, R-NC., returns to the closed hearing after speaking to members of the media about questioning of Justice Department official, Bruce G. Ohr, on Capitol Hill in Washington, Tuesday, Aug. 28, 2018. Ohr will be interviewed as part of an investigation into decisions made by the department in 2016. (AP Photo/Pablo Martinez Monsivais)
Rep. Mark Meadows, R-N.C., left, chairman of the conservative House Freedom Caucus, and Rep. Doug Collins, R-Ga., right, walk to a meeting of House Republicans as work in Congress resumes following the August recess, at the Capitol in Washington, Wednesday, Sept. 6, 2017. Meadows is opposed to suggestions by GOP leaders to connect the urgent Harvey aid bill to increasing the U.S. debt limit. (AP Photo/J. Scott Applewhite)
Rep. Mark Meadows, R-N.C., chairman of the conservative Freedom Caucus, speaks during a television news interview just before passage of the Republican tax reform bill in the House of Representatives, on Capitol Hill, in Washington, Tuesday, Dec. 19, 2017. (AP Photo/J. Scott Applewhite)
Rep. Mark Meadows, R-N.C., objects to House Oversight and Reform Committee Chair Elijah Cummings, D-Md., efforts to subpoena Trump administration officials over family separations at the southern border, on Capitol Hill in Washington, Tuesday, Feb. 26, 2019. The committee voted to subpoena Trump administration officials over family separations at the southern border, the first issued in the new Congress as Democrats have promised to hold the administration aggressively to count. The decision by the Oversight Committee will compel the heads of Justice, Homeland Security and Health and Human Services to deliver documents. (AP Photo/J. Scott Applewhite)
Up Next

After Trump announced the chief of staff switch, a source close to the president texted a simple response when asked about the reason behind the decision: “It’s time.”

“The relationship just ran its course,” the source said of Trump and Mulvaney.

Trump had two chiefs of staff prior to Mulvaney — former Republican National Committee Chairman Reince Priebus and retired Gen. John Kelly. In a White House that has seen record turnover, the chief changeup has come amid a new push to install loyalists and oust staffers deemed insufficiently supportive of the president

In the aftermath of the announcement, some influential Trump allies cheered Meadows’s selection. Kay C. James, president of the Heritage Foundation, a conservative think tank that has worked closely with the Trump administration on policy and  judicial picks, quickly issued a statement praising Meadows.

“Congressman Mark Meadows is a strong leader, principled conservative, and excellent choice to serve as President Donald Trump’s chief of staff,” James said. “In this new role at the White House, he will be in a position to advance the president’s agenda and promote conservative policy ideas.”