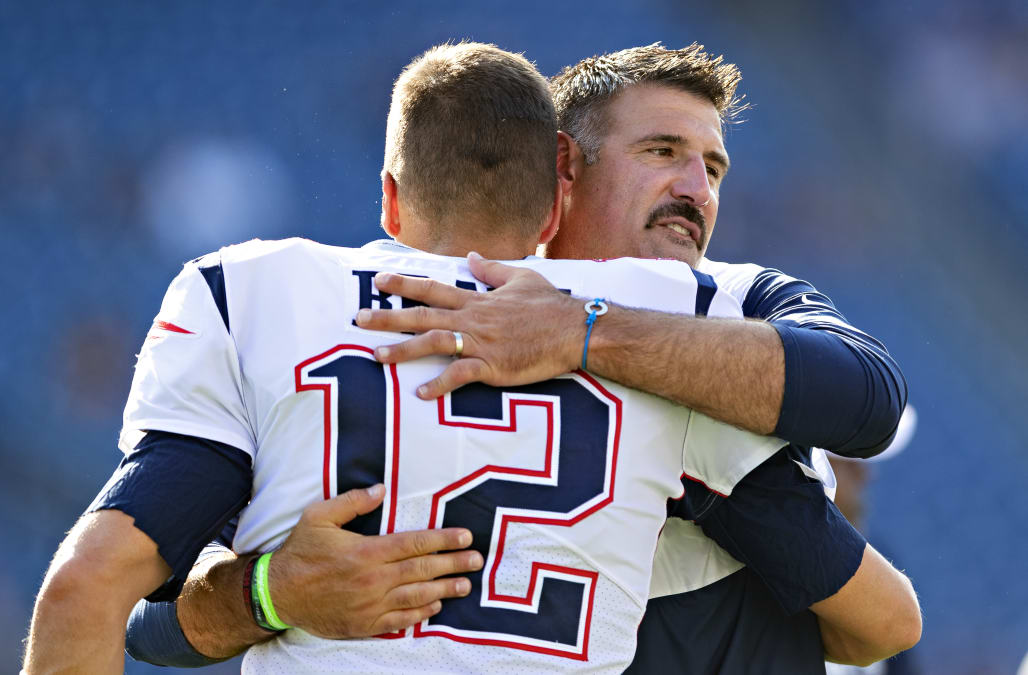 Tennessee Titans head coach Mike Vrabel has a simple reason for his video chat with Tom Brady: The two are good friends.

Video of that conversation — which also included Julian Edelman — went viral, prompting many to speculate that Vrabel was trying to recruit Brady to the Titans. As Vrabel explained, he’s known Brady since 2001, and that their friendship isn’t going to stop because Vrabel is a head coach and Brady is still playing.

.@Titans HC Mike Vrabel on @gmfb@nflnetwork on FaceTiming Tom Brady & Julian Edelman: "My relationship goes back to 2001 with Tom Brady. Those friendships aren't going to stop. He's a QB with an expiring contract."

The problem with Mike Vrabel’s phone call with Tom Brady

That may be true, but there are still reasons to be suspicious about the call. The biggest issue is Vrabel’s last sentence, in which he acknowledged Brady will be a free agent. If Vrabel and Brady discussed Brady’s upcoming free agency at all during that call, Vrabel could be punished for tampering. While it’s assumed Brady will hear pitches from other teams this offseason, he’s not officially a free agent until March 18. Brady is technically still a member of the New England Patriots until that date.

Would the Patriots actually pursue tampering charges against Mike Vrabel?

Because of that, Patriots head coach Bill Belichick might have something to say about Vrabel’s phone call with Brady. While no one can prove what was said on that call, the fact it happened in the first place raises suspicion. It doesn’t help that the Titans are currently without a quarterback, as both Marcus Mariota and Ryan Tannehill are set to be free agents. The Titans will almost certainly attempt to recruit Brady once he hits the market. If Belichick suspects Vrabel was trying to circumvent the rules, you can’t put it past Belichick to push for tampering charges. If the situation was reversed and Belichick was caught having a conversation with a soon-to-be free agent, NFL fans would be up in arms about it.

What will happen if NFL proves Mike Vrabel was tampering?

Ultimately, the NFL can’t do much to stop Brady from signing with the Titans if that’s where he wants to go. Even in a scenario where Vrabel was tampering, the NFL would likely fine the Titans and potentially dock them a few draft picks. That’s what the league did to the Kansas City Chiefs in 2016, when it was determined the Chiefs tampered with Jeremy Maclin. The Titans would pay a price, in that scenario, but they would still get Brady.

What will happen next with Mike Vrabel and Tom Brady’s phone call?

The NFL hasn’t announced an investigation, and the Patriots and Belichick haven’t publicly complained, so it’s possible this is the last we’ve heard about Vrabel’s phone call with Brady. But if Brady signs with the Titans in a few weeks, that could bring the phone call back into the news cycle.

In any case, the Patriots would likely have to make a fuss in order for the NFL to take further action. Even then, it would be tough to prove the nature of that phone call.

But if the league does take action, it would have a strong witness in Edelman. Given that Edelman wants Brady to remain with the Patriots, his testimony could determine the outcome of any potential investigation. That is, if he’s willing to speak openly about the phone call.