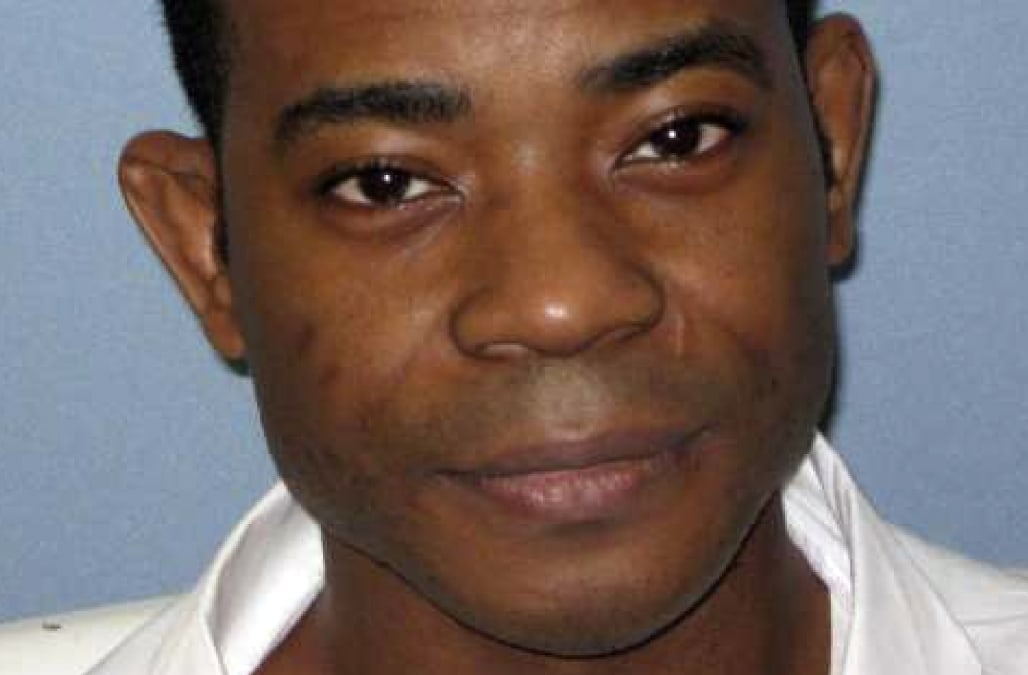 ATMORE, Ala. (AP) — A man convicted as an accomplice in the 2004 killings of three police officers in Alabama who were shot by another man was executed Thursday evening.

Inmate Nathaniel Woods, 43, was pronounced dead at 9:01 p.m. CST Thursday following a lethal injection at the state prison in Atmore, authorities said. The inmate had no last words before the chemicals began flowing, but appeared to arrange his hands in a sign of his Islamic faith.

Alabama's first execution of the year came after a last minute bid to stop it, that included support from the son of civil rights leader Martin Luther King Jr., and others who argued it was unfair to execute a man who didn't pull the trigger in the slaying.

The state of Alabama said that Woods was an active participant with the slayings and had bragged about it afterward in statements, song lyrics and art.

Woods and Kerry Spencer were convicted of capital murder and sentenced to death in the slayings of the three Birmingham officers. The officers' deaths in a hail of gunfire rocked Alabama's largest city in 2004. Carlos Owen, Harley A. Chisolm III and Charles R. Bennett died while trying to serve a misdemeanor domestic assault warrant on Woods at a suspected drug house.

Prosecutors said Spencer was the triggerman in the slaying, opening fire on the officers with a high-powered rifle inside the apartment, though Woods was convicted as an accomplice.

Family members of the slain officers gave statements to the media after the execution, describing lives shattered by the shootings.

“Nathaniel Woods chose his fate on June 17, 2004. That horrific day could have been prevented if he had any kind of compassion or respect for law enforcement," Starr Sidelinker said in reading a statement on behalf of Chisholm's sister.

Greg Owen, the son of officer Owen, said in a written statement that his father was a 58-year-old grandfather who only wanted to protect people in the city where he grew up.

“Instead of going home that day, he was ambushed, murdered and died on the floor of a filthy drug house," Greg Owen wrote.

Testimony showed the officers approached a small house where Woods and Spencer were believed to deal drugs; at least two other people were also inside. After talking to Woods through a back door, Owen and Chisholm entered. State lawyers wrote in court filings that Woods said he was surrendering to officers and soon after Spencer opened fire with a high-powered rifle. At his 2005 trial, a prosecutor told jurors that Woods was the “bait” and lured officers deeper in the apartment.

Owen, 58, and Chisholm, 40, were found dead in the kitchen just inside a rear door, and Bennett, 33, was fatally shot near the front door. A fourth officer was wounded but survived.

Supporters waged a last-minute appeal to stop the execution as the case drew national attention. Supporters argued that Spencer said he was the sole person responsible for the shootings and that Woods received an unfair trial in 2005.

“'He is actually innocent,” Woods' sister, Pamela Woods, had told reporters outside the prison earlier Thursday. “Kerry Spencer the actual shooter has stated many times that he did it on his own with no help for anyone."

Spencer told The Appeal in an article about the case that Woods was “100% innocent.”

“Killing this African American man, whose case appears to have been strongly mishandled by the courts, could produce an irreversible injustice. Are you willing to allow a potentially innocent man to be executed?” Martin Luther King III had written the state's governor, Ivey.

Woods had no last words after the warden read his death warrant. At one point during the procedure, the inmate jerked his left arm upward against the restraints of the gurney. His breathing became labored and then slowed until it was no longer apparent.

No execution date has been set for Spencer, who was convicted before Woods and is on death row.

This story has been corrected to show that the last name of one of the officers killed and his son Greg, quoted, was Owen, not Owens.