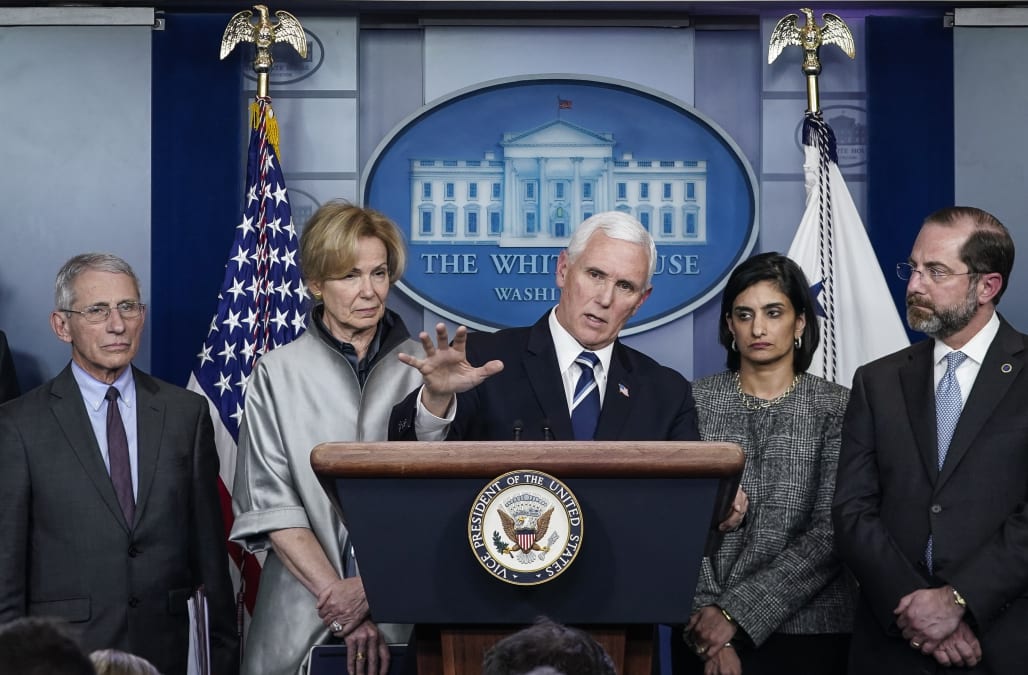 The Trump White House faced widespread criticism on Tuesday after Vice President Mike Pence conducted a press briefing on the coronavirus outbreak, but members of the media were not allowed to film or record audio of the proceedings.

The administration ― which only last week vowed to be “aggressively transparent” with the public about the spread of the virus that has now killed nine people in the U.S. ― only allowed still photographs to be taken, CNN’s Jim Acosta and other journalists in attendance tweeted.

WH is allowing only still photos of this Coronavirus briefing. No audio or video permitted. Here is a photo of the VP as the briefing began. pic.twitter.com/kB05s6IRvO

“I asked Pence why the Coronavirus briefing is off camera today. He said he believes the briefing will be back on cam tomorrow,” Acosta later posted, noting “the closest thing to an explanation we got” was “when Pence said Trump was on camera a bunch today.”

Obama era White House chief photographer Pete Souza said he “can’t ever remember a time when a VP or POTUS spoke in the White House press briefing room and video/audio was prohibited.”

Instead we are getting this. https://t.co/0z6yXdodE0

The @WhiteHouse held a briefing on the #CoronaVirus today and **did NOT allow video or audio to be recorded**.

So the purpose of the briefing isn't to communicate vital information to the public, but just to serve as a photo op?

I can't ever remember a time when a VP or POTUS spoke in the White House press briefing room and video/audio was prohibited. Maybe ask resident expert @markknoller if this is a first. https://t.co/EXjmkgPVhp

No audio or video allowed at this coronavirus press conference.

If it’s an emergency, the public needs to be informed.

If it’s not an emergency, the public should be told. https://t.co/buHwPm1DiR

No audio or video permitted at Pence WH coronavirus press conference, absolutely outrageous and will further signal the public that the Trump admin doesn’t have a handle on this @SenSchumer@SpeakerPelosi@KevinMcCarthyTV@senatemajldrhttps://t.co/flU4QD32Rn

Not how a functioning democracy works. https://t.co/Cg7xBadjXx

The White House has prohibited audio and video at its coronavirus briefing. It's like they're imploding. https://t.co/zNDwUe3vZu

Will courtroom sketch artists replace photographers in the next briefing?

No audio or video allowed...for a virus that is spreading.

Where is that executive order about free speech on campus again? https://t.co/mwa78iiA9n

This is unacceptable. The American people, including state and local public health officials, need credible information — not a still photo of @VP surrounded by officials. https://t.co/XvABrm1bqZ

To be clear - a briefing intended to inform the public and keep the public safe is being blocked from the public? https://t.co/OOSli6V4ja

This is how you act when you are 99% certain that one of your people is going to say something 100% wrong. https://t.co/mNt4iqMoS9

What a ridiculous decision. This is the most incompetent Administration imaginable. https://t.co/JpmcH1gqr2

What's going on here? Yesterday @VP bragged about how "we’ll be back here everyday. Get used to seeing us."

But now, no cameras or even audio? This reeks of an effort to avoid scrutiny in real time from the public health community. https://t.co/rN0LVhuUGD

No, actually that's video. It's their cunning new plan. Remain absolutely motionless, and maybe the virus won't spot you. These guys are on top of it after all. https://t.co/PT0tu99n0J

I hope someone has a hidden mic. https://t.co/ljuGyqSxu4

Controlling the message, not the outbreak. https://t.co/VfbY3pHyyU

No audio or video? Authoritarian response to cover up the sheer incompetence! https://t.co/Hq7rdY1qfC

This is absurd. Are they doing this presser for themselves or for America?? https://t.co/m5qL8jS2Rt

Surely someone in that room is going to be a hero, right? If the commitment to journalism is such that some of you can’t feel you should even vote, certainly you’d feel compelled to make sure the people heard and...we aren’t getting tape, are we? https://t.co/n3wjJs4IsU

That's probably the best way to make sure nothing is misquoted or taken out of context.

Oh wait, no, sorry, I meant that is probably the best way to BE SURE things are misquoted or taken out of context.

Someone pls explain to me WHY the Trump administration won't allow news audio or video of its #Covid_19 briefing. I truly do not understand this. It's unnerving. https://t.co/9q8ifDOMAy