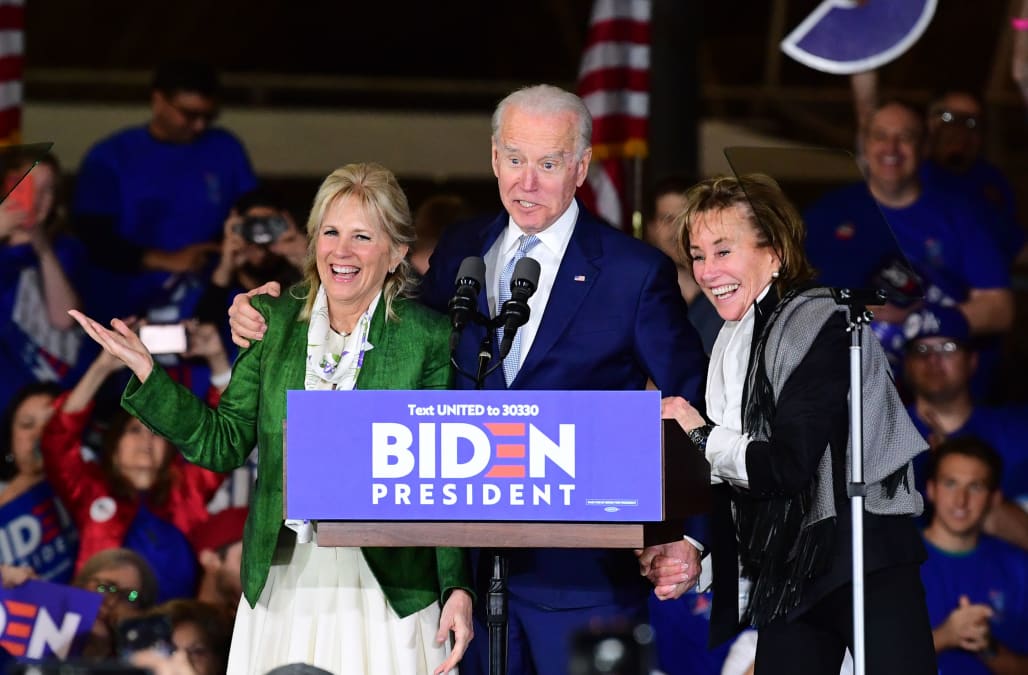 Protesters disrupted former Vice President Joe Biden’s speech as he celebrated primary wins in several states on Super Tuesday — and his wife, Jill Biden, was having none of it.

As an animal rights activist waving a “Let Dairy Die” sign rushed the stage during the California event, Jill Biden immediately leapt in front of her husband with her arms raised, blocking him with her body. Symone Sanders, a senior adviser to the presidential candidate, rushed in to haul the protester off the stage.

Protestors interrupt Joe Biden during his speech to chant "Let Dairy Die" and it looks like Jill Biden moves to protect him. I did NOT see that one coming. #SuperTuesdaypic.twitter.com/ndQp0nPyyg

It’s not the first time Jill Biden has jumped to her husband’s defense. Earlier this year, she played bouncer as she helped eject a heckler from a rally in New Hampshire. She later told reporters, “I’m a good Philly girl” when asked about the incident.

Sanders, who was also praised for her quick action on Tuesday, apparently wasn’t too fazed by the dramatic moment:

I broke a nail. #SuperTuesday

The Direct Action Everywhere Facebook page advertises similar protests with similar signs, and shared the video of the disruption at Biden’s event.

Biden continued his speech after the interruption, celebrating with his supporters in Los Angeles after racking up Super Tuesday wins across the country in Massachusetts, Virginia, North Carolina, Tennessee, Oklahoma and Alabama in the wake of his decisive victory in South Carolina over the weekend.

One thing we can all agree on is Dr Jill Biden has always been a badass. Seeing how she just jumped into action to PHYSICALLY have her husband’s back when a protestor rushed the stage was a new level of impressive.

Just witnessed protestors rushing the stage, Jill Biden jumped in front of her husband and puts her arms out.
She put her body between the protestor and her husband.

Jill Biden is a linebacker

Related: Jill Biden is from Philly

If you are a protester, Valerie Biden and Jill Biden are two people you probably don't want to mess with.

Jill Biden with some serious "not on my watch" energy pic.twitter.com/7Deds7QOpX

And actor Amy Schumer even created a play-by-play voiceover of the moment.

Jill Biden is a warrior

More from HuffPost US:
5 takeaways from Super Tuesday's Democratic presidential race
Mike Bloomberg gets testy after being pressed about dropping out
Elizabeth Warren tells Jimmy Kimmel the exact reason she doesn't like Bloomberg