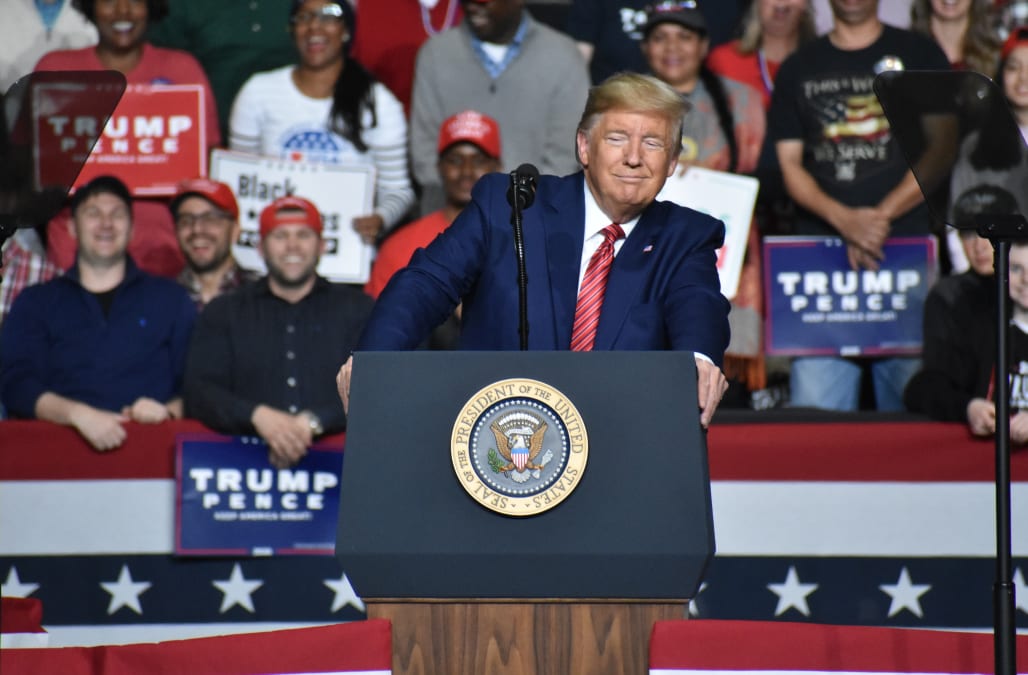 President Trump said Monday that campaign rallies like the one he had planned for later that evening in Charlotte, N.C., are “very safe.”

“Well, these were set up a long time ago and others are,” Trump told reporters. “You could ask that to the Democrats because they’re having a lot of rallies. They’re all having rallies. That’s what they’re doing. They’re campaigning.”

Asked whether he was worried about whether large gatherings were safe, the president replied: “I think it’s very safe.”

Despite Trump’s assurances at a White House news conference on Feb. 27 that the number of coronavirus cases in the United States was “going very substantially down, not up,” the tally of those infected has continued to rise. As of Monday morning, 87 U.S. citizens had been diagnosed with the coronavirus and six people had died from it, all in Washington state.

“The risk that all of us will become infected is increasing,” Jeffrey Duchin, MD, Seattle and King County health officer for public health, said at a Monday news conference.

While Duchin said that his office was “not recommending widespread cancellation of large gatherings,” he noted that those at higher risk “should avoid” them.

Health experts warn that the highly contagious virus can be spread through droplets in the air when an infected person sneezes or coughs.

With the presidential race nearing Super Tuesday, candidates have fanned out across the country, shaking hands and holding rallies with thousands of supporters.

As the virus has spread to more than 60 countries around the world, infecting nearly 90,000 and killing over 3,000, dozens of large events have been canceled. In the United States, Facebook scrapped plans to hold a developer’s conference in San Jose, Calif., May 5-6. The Game Developers Conference canceled its San Francisco show March 16-20. The American Physical Society canceled its annual meeting in Denver just two days before it was supposed to begin this week — after many of the more than 10,000 scientists expected to attend had already arrived in the city.

The Trump administration itself has put off a March 14 meeting in Las Vegas of the Association of Southeast Asian Nations.

While China has seen a significant drop in the number of new cases of the coronavirus since putting tens of millions of residents on lockdown, the virus has spread quickly in Europe. Last week France announced that it was banning all indoor gatherings of more than 5,000 people.

Bernie Sanders drew approximately 20,000 people to a campaign rally Sunday in Los Angeles, and Trump routinely fills arenas with more than 10,000 seats — and, as he boasts, many fans waiting outside.

Proximity to strangers at large political rallies is all but unavoidable, and health officials have advised avoiding shaking hands or greeting others with a kiss.