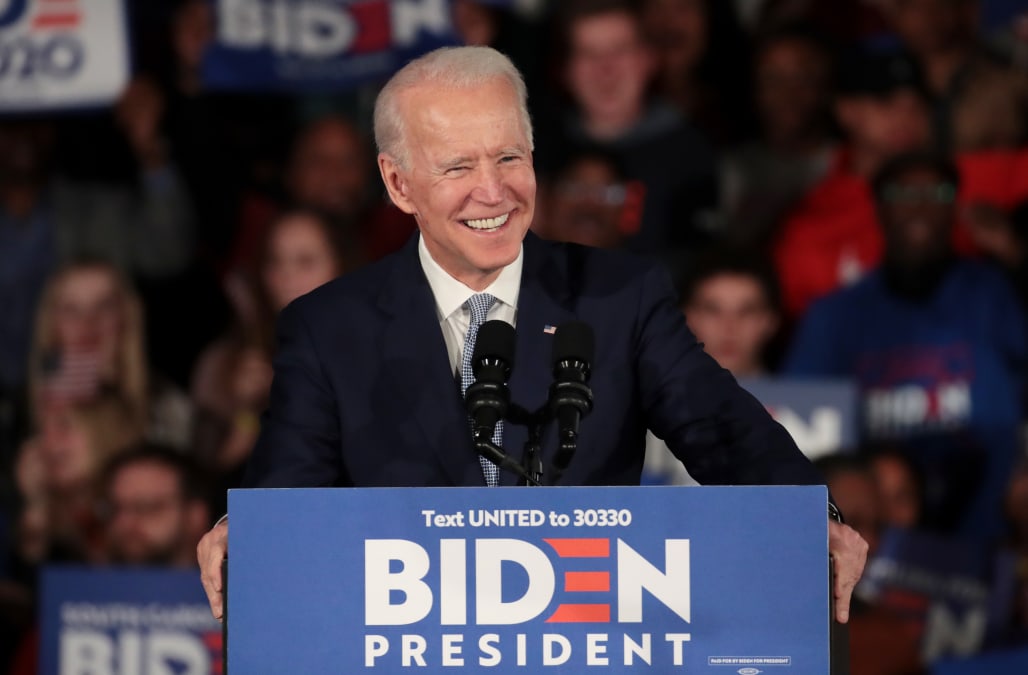 WASHINGTON — Former Vice President Joe Biden took aim at Bernie Sanders on Sunday’s “Meet the Press,” arguing that the Vermont senator's policies are “very controversial” and that Sanders would lose to President Trump if he were to be the Democratic party’s presidential nominee.

When asked if he thought Sanders would lose to Trump, Biden replied: “I do.”

“I think Bernie Sanders’ positions on a number of issues, even in the Democratic Party, are very controversial,” pointing to the price tag for Sanders’ Medicare for All health care plan.

“Everybody’s gonna look at Bernie’s record as closely as they’ve looked at mine over the last five months, and I think they’re going to see some stark differences in where we stand.”

Biden is coming off an overwhelming victory in the South Carolina Democratic primary Saturday, an almost 30-point win over Sanders with virtually all precincts reporting.

Biden won with voters of all stripes, the top choice among men, women, white voters, non-white voters, the college-educated, non-college educated, liberals, moderates and conservatives in exit polls. He also had the highest favorable rating of the Democratic field by a double-digit margin.

And he won every county in the state, running up the margins particularly in the areas around Charleston and Columbia.

The margin of that victory has allowed Biden to pull into a close second behind Sanders in the delegate race. And it’s given his campaign a shot in the arm days before Super Tuesday, when 14 states, American Samoa and the Democrats Abroad hold their nominating contests.

Biden told “Meet the Press” that his campaign raised $5 million online in the past 24 hours, riding his momentum to what his campaign says is a fundraising record for him.

But while admitting he’s being out-raised significantly by Sanders — the Sanders camp announced Sunday morning it raised more than $46 million in February, including $4.5 million on the last day of the month — Biden argued that South Carolina proves a candidate can still win despite being outspent.

While Biden outspent the Sanders campaign on the airwaves, according to the ad-tracking firm Advertising Analytics, billionaire Tom Steyer outspent Biden by a margin of about 40-1 in the state. Steyer suspended his campaign Saturday night after a disappointing finish in South Carolina.

And he after making a prediction that he could win the Democratic presidential nomination before the party’s summer convention, he said the Democratic nominating calendar will become more favorable for him on Super Tuesday and beyond.

“I think I can win it before the convention,” Biden said.

“We’re moving into constituencies that, when they hear me, have always been mine — diverse communities; white, working-class folk; African Americans and Hispanics; people in the middle class; women in the suburbs. There are places I’ve always been very strong my whole career.”