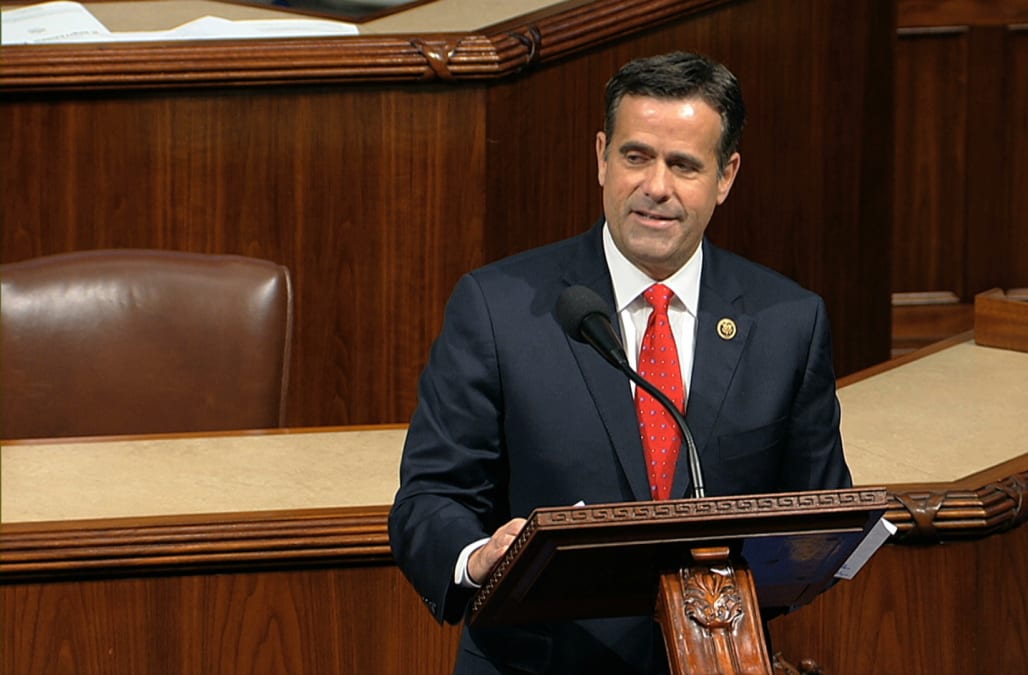 WASHINGTON (AP) — President Donald Trump on Friday picked Rep. John Ratcliffe again to be the nation's top intelligence official, just months after abruptly ending an earlier effort to install him amid bipartisan criticism that the Texas Republican was unqualified for the post.

Trump's decision meant that once again the GOP-led Senate would have to decide whether to put the three-term lawmaker in charge of overseeing the 17 U.S. spy agencies that the president has repeatedly scorned.

It also puts the leadership of the intelligence community in the spotlight early in an election year in which those agencies are already warning that Russia is trying anew to interfere in the presidential race. Democrats have also accused Trump of installing people atop some agencies most noteworthy for their fealty to him, not intelligence expertise.

“All while our elections are perilously at risk of foreign interference. Just the way the President likes it,” tweeted Rep. Adam Schiff, D-Calif., who chairs the House Intelligence Committee and helped lead his impeachment by the House.

Trump initially named Ratcliffe for the job last summer, but abruptly withdrew his name just five days later, before the Senate even considered him. The president bowed to questions about Ratcliffe's qualifications and bipartisan concerns that he had little experience in the field of intelligence.

At the time, news reports challenged the accuracy of Ratcliffe’s resume. His selection then drew sharp criticism from Democrats and a lukewarm response from some Republicans.

Before being elected to Congress in 2014, Ratcliffe was mayor of Health, Texas, and a U.S. attorney in the Eastern District of Texas.

But since last summer, Ratcliffe's visibility rose as an ardent defender of Trump during the House's impeachment proceedings against him.

“John is an outstanding man of great talent!” Trump said in announcing his choice in a tweet.

Ratcliffe's fate in the Senate this time remains unclear.

But if he is confirmed, he would replace Richard Grenell, a Trump loyalist who is currently serving as acting national intelligence director while keeping his title as U.S. ambassador to Germany. Grenell has also drawn criticism from Democrats as being unfit for the job.

“Replacing one highly partisan operative with another does nothing to keep our country safe,” Senate Minority Leader Chuck Schumer, D-N.Y., said in a statement. “At a time when the Russians are interfering in our elections, we need a nonpartisan leader at the helm of the Intelligence Community who sees the world objectively and speaks truth to power."

“Intelligence should never be guided by partisanship or politics," said House Speaker Nancy Pelosi, D-Calif. She said Ratcliffe “has shown an unacceptable embrace of conspiracy theories and a clear disrespect and distrust of our law enforcement and intelligence patriots that disqualify him from leading America’s intelligence community.”

Sen. Richard Burr, R-N.C., who chairs the Senate intelligence committee, used a measured tone in a statement about Ratcliffe, saying ”there is no substitute” for having a permanent director of intelligence. "I look forward to receiving Congressman Ratcliffe’s official nomination and ushering it through the Senate’s regular order,” Burr said.

Under the Federal Vacancies Reform Act, Grenell could only serve in his post until March 11 unless the president formally nominates someone else for the job.

But by selecting Ratcliffe, Grenell can stay for up to 210 days while Ratcliffe weaves his way through the Senate confirmation process, and for another 210 days if senators reject Ratcliffe's nomination, said Steve Vladeck, a national security law professor at the University of Texas.

President Donald Trump said on Friday he was tapping Republican Representative John Ratcliffe to be the nation's top spy. It's the second time Trump nominated Ratcliffe, a loyalist whose first nomination to be director of national intelligence was dropped last year amid questions about a lack of experience and possible resume padding.

It would allow him to extend the term of his current acting DNI, Richard Grenell, another staunch supporter, while the Senate considers Ratcliffe's nomination.

Ratcliffe was a fierce defender of the president during his impeachment in the House.

His announcement drew a lukewarm response from Richard Burr, the Republican chairman of the Senate Intelligence Committee, and swift condemnation from Democrats.

Mark Warner, the top Democrat on the Senate Intelligence Committee, said in a statement "The last time this nomination was unsuccessfully put forward, serious bipartisan questions were raised about Rep. Ratcliffe's background and qualifications. It's hard for me to see that anything new has happened to change that."

“From the president’s perspective, it’s pretty clever because the only way the Senate can defeat the ploy is confirm someone that they might not want to confirm,” said Vladeck, who believes that Trump may be daring the Senate to reject Ratcliffe.

The Office of the Director of National Intelligence has been in upheaval since Dan Coats, who had a fraught relationship with Trump, announced in July 2019 that he was stepping down. Sue Gordon, the principal deputy national intelligence director under Coats, left with him. Democrats accused Trump of pushing out two senior, dedicated intelligence professionals.

After withdrawing Ratcliffe's name, Trump in August named Joseph Maguire, director of the National Counterterrorism Center, as acting national intelligence director. But earlier this month, Trump moved Maguire aside — before his tenure as acting director was set to expire on March 11 — and named Grenell as acting director.

Trump's decision to bring in Grenell came amid controversy over a classified briefing on election security that intelligence officials gave members of the House intelligence committee.

There were conflicting accounts about what the U.S. election security officials told committee members during the closed-door briefing about Russian meddling in this year's presidential election.

People familiar with the congressional briefing said election security officials indicated that the Kremlin was looking to help Trump win re-election, as it did in 2016. But a senior official with the Office of the Director of National Intelligence said lawmakers were not told that Russia was actively aiding Trump's campaign to boost his chances of a second term. The officials spoke on the condition of anonymity to discuss the sensitive information.

When asked if Maguire was moved out as part of an effort to purge administration officials seen as disloyal to Trump, the president said only that Maguire's tenure as acting director was ending. He called Maguire an “excellent guy” and said he chose Grenell to replace him as acting director until he can announce a new nominee for the job.

Ratcliffe, who sits on the House intelligence, judiciary and ethics committees, is a fierce defender of the president. He was a member of Trump's impeachment advisory team and strenuously questioned witnesses during the House impeachment hearings.

He also forcefully questioned former special counsel Robert Mueller when he testified before the House Judiciary Committee about his investigation into Russian interference in the 2016 election.

After the Democratic-controlled House voted to impeach Trump, Ratcliffe said: “This is the thinnest, fastest and weakest impeachment our country has ever seen”