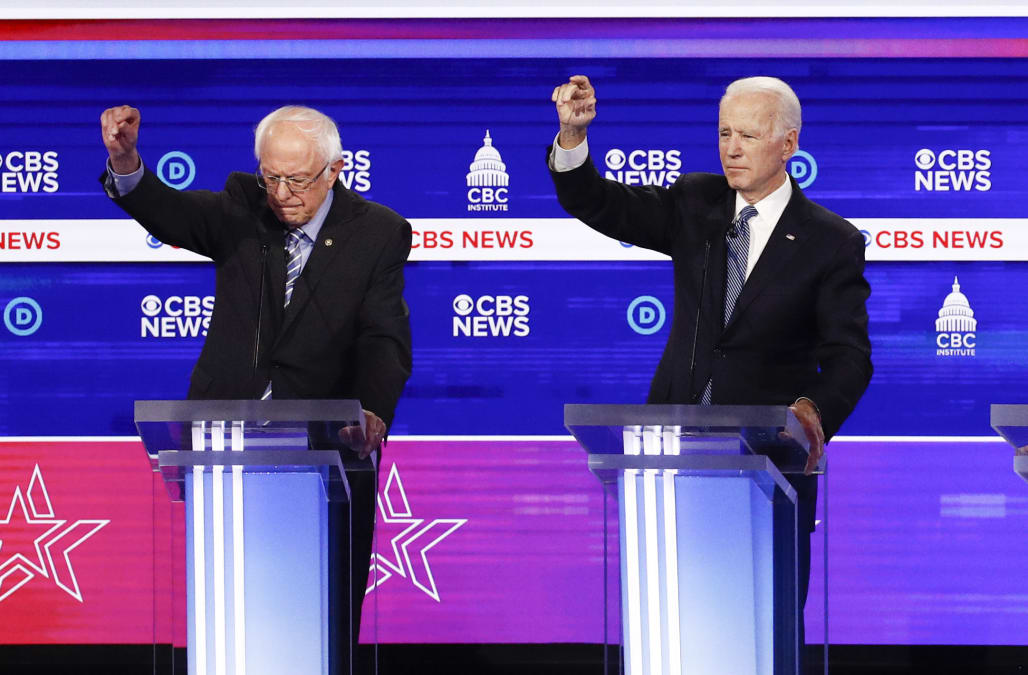 Is Bernie Sanders “electable”? It’s a question that’s been troubling many Democrats, who fear that despite his strong showings in Iowa, New Hampshire and Nevada, the self-described democratic socialist from Vermont would lose to President Trump in November.

A new Yahoo News/YouGov poll suggests that Sanders could be a riskier nominee than his supporters are willing to admit. In a national trial heat with Trump, Sanders led 48 percent to 42 percent among registered voters. Yet when the playing field was narrowed to the 10 states that were closest in the 2016 presidential election and that will likely decide 2020 — Michigan, New Hampshire, Wisconsin, Pennsylvania, Florida, Minnesota, Nevada, Maine, North Carolina and Arizona — Sanders’s lead over Trump was slashed in half (48 percent to 45 percent). That 3-point gap was within the margin of error.

Sanders is still running strong among Democratic primary voters, with a 78 percent favorable rating, the same as Warren and Biden. The poll found that 27 percent of Democrats say he is their first choice for the nomination, followed by Biden at 21 percent, Warren at 18 percent, Bloomberg at 14 percent, Buttigieg at 10 percent, Minnesota Sen. Amy Klobuchar at 4 percent, California businessman Tom Steyer at 2 percent and Hawaii Rep. Tulsi Gabbard at 1 percent. Within the Democratic primary electorate, Sanders led among 18-to-29-year-olds (by 22 points), 30-to-44-year-olds (by 23 points) and Latinos (by 7 points) — groups that have helped him win more votes than his rivals in the early nominating contests. Sanders also ran even with Biden among black likely primary voters (31 percent to 30 percent), suggesting that he is chipping away at one of the former vice president’s core constituencies.

The poll suggests that Sanders’s liberalism could hinder him in the states that will matter most in November. For instance, self-identified Democrats favor Medicare for All, 53 percent to 23 percent — but voters in battleground states oppose the policy, 31 percent to 53 percent. Similarly, battleground-state voters oppose free public-college tuition (37 percent to 50 percent) and decriminalizing illegal border crossings (28 percent to 57 percent). These are all policies that Sanders favors and Biden opposes.

Sanders supporters argue that he would win in November by turning out historic numbers of young voters, new voters and voters of color. But as a New York Times analysis recently noted, Sanders has prevailed so far in the Democratic primary by “expanding his appeal among traditional Democratic voters, not by driving record turnout.” Meanwhile, a new study by political scientists from Yale and the University of California, Berkeley, showed that nominating Sanders would drive many Americans who would otherwise vote for a moderate Democrat to vote for Trump — losses that Sanders could only offset by inspiring an unprecedented 11-percentage-point turnout boost among young left-leaning voters, who haven’t showed up at anything approaching that level this year.

None of which is to say that Sanders can’t beat Trump. But at this point, data suggests he might not be the Democrats’ safest bet.

More from Yahoo News:
Most Democrats think Obama has endorsed a candidate for president, poll shows. He hasn't.
Sanders’s surge spreads fear among House and Senate Democrats
5 takeaways from the Democratic debate in South Carolina