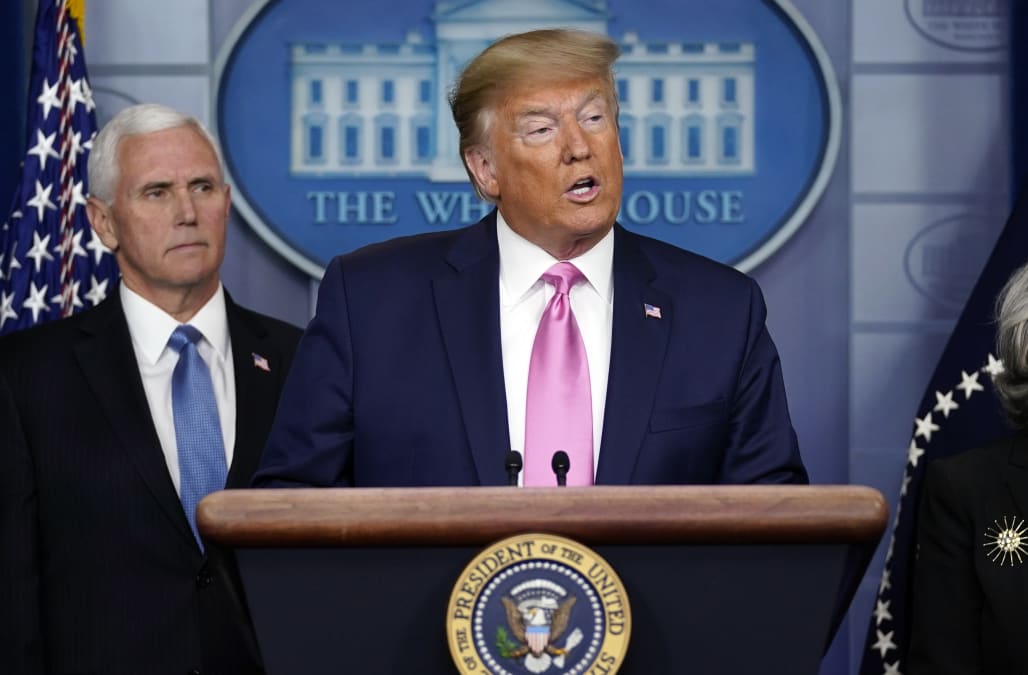 WASHINGTON — President Trump addressed the nation from the White House briefing room on Wednesday evening in an effort to calm anxieties about the rapid proliferation of coronavirus. In a seeming acknowledgement that the White House response has lacked clarity and cohesion, Trump announced he was putting Vice President Mike Pence in charge of the effort to stem the spread of the virus in the U.S.

“I don’t view Mike as a czar,” Trump said, though he did not explain what, exactly, Pence’s duties would be. Health and Human Services Secretary Alex Azar had previously been in charge of the coronavirus response.

Standing next to Pence, Azar and some of the nation’s top public health officials, Trump praised his administration’s response to the virus that has so far infected more than 81,000 people across the globe. Though no Americans have yet died from the respiratory disease, Trump’s handling of the crisis has been criticized by Democrats and Republicans alike.

“Because of all we’ve done, the risk to the American people remains very low. We have the greatest experts, really, in the world right here,” he added. It was a rare moment of Trump fulsomely praising scientific expertise instead of challenging it.

At one point, the president held up a printed sheet of paper from the Global Health Security Index, a Johns Hopkins University database that ranks the United States first in the world in terms of preparedness for outbreaks like the current one, which has hampered the Chinese economy and could lead to a worldwide slump. More important, it could continue to kill people, especially in nations with poor public health infrastructure.

The president noted that there were 59 U.S. citizens who had contracted the coronavirus, the bulk of those being passengers evacuated from the Diamond Princess cruise ship in Japan. But as Trump spoke, a new case of unknown origin was reported in Northern California.

More cases are expected, especially as the virus takes hold in Europe. That has left the administration in a tricky position, desperate to project confidence but hesitant to declare victory over a foe that could soon break out into a bona fide pandemic.

Still, Trump couldn’t help praising his own administration’s response, calling it “a tremendous success.” The days and weeks to come will test the veracity of that assertion, as the virus is expected to make its way to the United States. Speaking at the briefing, CDC deputy principal director Anne Schuchat, MD, said that “we do expect more cases, urging institutions to review their “pandemic preparedness plans.”

“I don’t think it’s inevitable,” Trump said of such a spread. At several points, he compared the coronavirus to the flu, in a seeming attempt to downplay the severity of the former.

Conflicting statements have been a hallmark of the administration’s response. The Trump administration spent much of the day denying rumors that Trump was unhappy with Health and Human Services Secretary Azar, a former pharmaceutical executive who is leading a presidential task force on the coronavirus.

Testifying on Capitol Hill a few hours before Trump’s address, Azar was asked if the Trump administration planned to appoint a coordinator for the government’s response, a position usually given the title of “czar.” President Obama, for example, appointed an Ebola czar during an outbreak of that disease in 2014.

Azar answered that no czar was going to be named. That was met with a quip by Rep. Mark Pocan, D-Wis., who mused that “Jared Kushner will have more free time then,” a reference to the inordinately large policy portfolio of the president’s young son-in-law and close adviser. Kushner does not, in fact, appear to be involved in the handling of the coronavirus crisis.

White House officials told Yahoo News much the same thing on Tuesday morning, placing Azar directly below the president in the chain of coronavirus command. But with the appointment of Pence, that was no longer the case.

Trump did not outline Pence’s responsibilities but praised the health care system Pence oversaw in Indiana. That health system was ranked 39th of 50 states by the United Health Foundation in its 2016 annual report. During Pence’s governorship, Indiana suffered an HIV outbreak that, some believe, could have been prevented with better public health policy.

In his own remarks, the reliably loyal Pence praised the “unprecedented steps” Trump had taken, including travel restrictions, quarantines and the creation of a task force.

The Trump administration on Monday requested $2.5 billion from Congress to fight the coronavirus. Those funds would be used to stockpile respirators and, more importantly, fund the search for a vaccine. But one congressional staffer who had studied the request, and was familiar with the appropriations process, was dismayed by what the Trump administration had sent over.

“We’ve gotten very little information from them — a two-page letter and an accompanying table,” the staffer told Yahoo News, requesting anonymity in order to talk frankly about the issue.

Senate Majority Leader Chuck Schumer, D-N.Y., a frequent adversary of Trump, offered his own proposal, which would fund the coronavirus response at $8.5 billion.

In a Washington that has become used to shutdowns over funding fights, the possibility of Democrats more than tripling Trump’s request seemed to amuse the president, who nonetheless remain satisfied with his own, lower, numbers.

“We’ll be satisfied whatever it is,” he concluded.

Pressing questions also remain about when a vaccine will be ready for public use. Speaking at the briefing, Dr. Anthony Fauci, a top official at the National Institutes of Health, tried to downplay expectations of expedience. “We can’t rely on a vaccine over the next several months to a year,” he said.

Yet Trump stoked those very same expectations, calling the vaccine “something that we can develop fairly rapidly.”

Trump mostly avoid politics — but not entirely. When a reporter brought up criticisms made earlier that day by House Speaker Nancy Pelosi, who’d branded his response “anemic and too late,” Trump shot back by calling her “incompetent,” predicting that the Democratic Party would soon lose control of the House of Representatives. He also criticized her San Francisco congressional district, whose homelessness problem has become a favorite rhetorical target of the president.

He also deployed his favorite epithet for Senate minority leader, calling the fellow New York native “Cryin’ Chuck Schumer.” He had avoided doing so earlier in the press conference, but the reporters reference to Democrats’ criticisms had plainly irritated the president, who was clearly laboring to project competence and confidence.

“There’s no reason to panic,” the president said, “because we have done so good.”