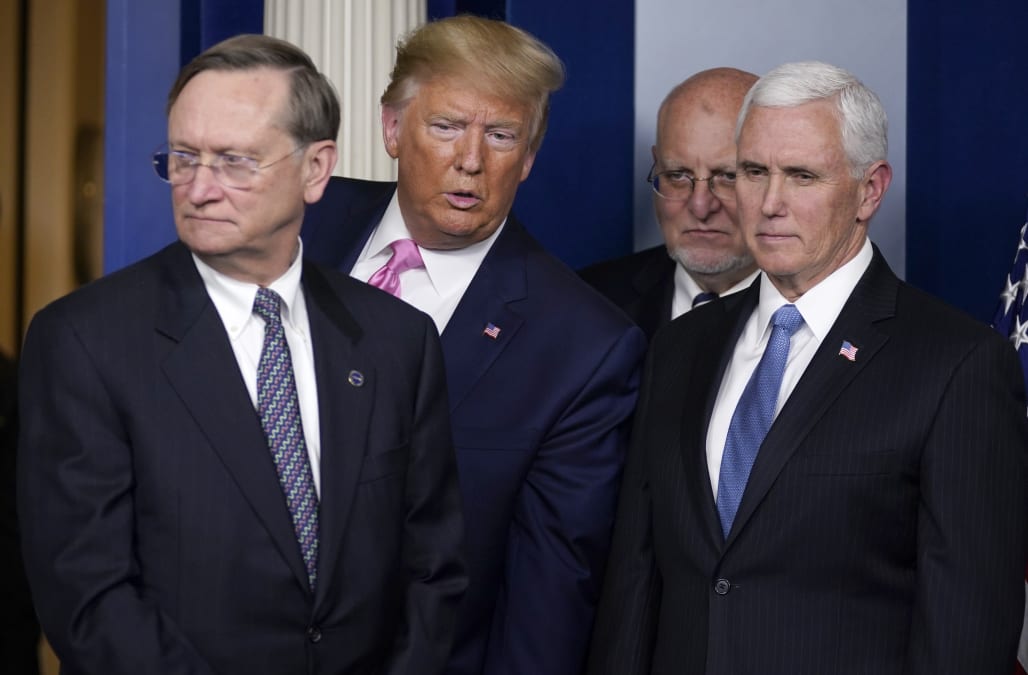 As fears of a coronavirus pandemic rise, the response from Washington politicians has taken a decidedly partisan tone, and information from experts has become closely guarded.

One day after painting a dire picture at a Wednesday news conference at the White House about the possible effects of the infection, Dr. Anthony Fauci, director of the National Institute of Allergy and Infectious Diseases, was directed by the Trump administration to not say anything further about the virus without clearing it first, the New York Times reported.

Speaking after Trump boasted of the “tremendous success” of his administration’s response to coronavirus threat, Fauci gave a less optimistic view.

“When it was focused only on China, we had a period of time, temporary, that we could do a travel restriction that prevented cases from coming into the U.S.,” Fauci said. “When you have multiple countries involved, it’s very difficult to do. In fact, it’s almost impossible.”

Also on Thursday, California Gov. Gavin Newsom said the state was “monitoring” 8,400 people for possible coronavirus infection, based on possible exposure. The day before, California recorded the first known case of the disease in an American who had not traveled abroad, indicating its potential to spread domestically.

In an interview with CNN last week, Fauci said “we are clearly at the brink” of a pandemic.

With the Dow Jones Industrial Average plunging for the third day in a row on fears of an economic downturn, and one day after officials at the Centers for Disease Control agreed with Fauci’s prediction that the virus will inevitably spread in the U.S., Trump’s messaging alternated between trying to assuage fears about the virus and an effort to score political points against Democrats.

While claiming that his administration’s response to coronavirus had resulted in “tremendous success beyond what many people would’ve thought,” he also blamed the Democratic presidential debates for the stock market plunge.

“I think the financial markets are very upset when they look at the Democrat candidates standing on that stage, making fools out of themselves, and they say, ‘If we ever have a president like this,’” Trump said in reference to the Democratic presidential debate this week in South Carolina. “When they look at the statements made by the people standing behind those podiums, I think it has a huge effect.”

The president also responded to criticism from House Speaker Nancy Pelosi that his administration had put forth a response effort to the virus that was “meager” and “anemic.”

“I think Speaker Pelosi is incompetent. I think she’s not thinking about the country,” Trump said. He accused her of “trying to create a panic” over the virus.

“I hope that it’s going to be a very little problem, but we have to work together. Instead she wants to do the same thing with ‘Crying’ Chuck Schumer,” he said.

On Wednesday, Trump tweeted that news media he views as hostile are trying to make him look bad by exaggerating the threat posed by coronavirus. He spelled it wrong.

Low Ratings Fake News MSDNC (Comcast) & @CNN are doing everything possible to make the Caronavirus look as bad as possible, including panicking markets, if possible. Likewise their incompetent Do Nothing Democrat comrades are all talk, no action. USA in great shape! @CDCgov.....

Shortly after Trump’s press conference, Pelosi issued a statement the said the administration had “mounted an opaque and chaotic response to this outbreak.”

“The Trump Administration has left critical positions in charge of managing pandemics at the National Security Council and the Department of Homeland Security vacant,” Pelosi’s statement continued. “The Trump Budget called for slashing almost $700 million from the Centers for Disease Control. And even now, the Administration continues to devalue Americans’ health security by ransacking funding from other vital public health needs.”

Pelosi also responded to Trump’s claim that the stock market was falling because investors were frightened by the Democrats’ debate in South Carolina Tuesday night.

“The coronavirus outbreak poses serious health, diplomatic and economic threats to the United States, and we must be prepared to confront it head on,” Sen. Elizabeth Warren, D-Mass., said in a statement. “Rather than use taxpayer dollars to pay for a monument to hate and division, my bill would help ensure that the federal government has the resources it needs to adequately respond to this emergency.”

At a CNN town hall on Wednesday, former Vice President Joe Biden also blasted Trump for his budget priorities. “He goes and he takes away the office we set up that’s designed to deal with pandemic disease,” Biden said of Trump, adding that the president “tried to defund the CDC. He tried to defund the NIH. He did not have a plan to deal with how you equip hospitals.”

During Tuesday’s presidential debate, Sen. Bernie Sanders mocked Trump over what he describes as the president’s distrust of science.

“This great genius has told us that this coronavirus is going to end in two months. April is the magical day that this great scientist we have in the White House has determined. I wish I was kidding. That is what he said,” Sanders said.

Infectious disease experts say the transmission of many respiratory viruses, such as seasonal flu, slows in hot, humid weather, but that has not been tested in the case of coronavirus, which was first identified just two months ago.

The concern among many Democrats that public health information will be distributed without political interference from the White House remained after Trump’s press conference, just as some Republicans believed the opposing party was using the coronavirus issue to weaken the president politically. Conservative radio host Rush Limbaugh, for instance, has accused a CDC official of weaponizing the coronavirus out of enmity for the president.

Vice President Mike Pence, the man Trump has put in charge of coordinating the government response to the coronavirus, spoke Thursday at the Conservative Political Action Conference about the challenges ahead.

“I promise you, we will continue to bring the full resources of the federal government to bear to protect the American people,” Pence told the crowd. “And as the president also said, it’s important to remember we’re all in this together. This is not the time for partisanship.”

Shortly thereafter, however, partisanship found its way into his remarks. “I know you’re going to say ‘yes’ to four more years of Donald Trump in 2020.”

More from Yahoo News:
House paves the way for historic anti-lynching bill to head to president’s desk
AOC lowers expectations on Medicare for All, admitting Sanders 'can't wave a magic wand' to pass it
Trump is elevating judges who could gut the Voting Rights Act