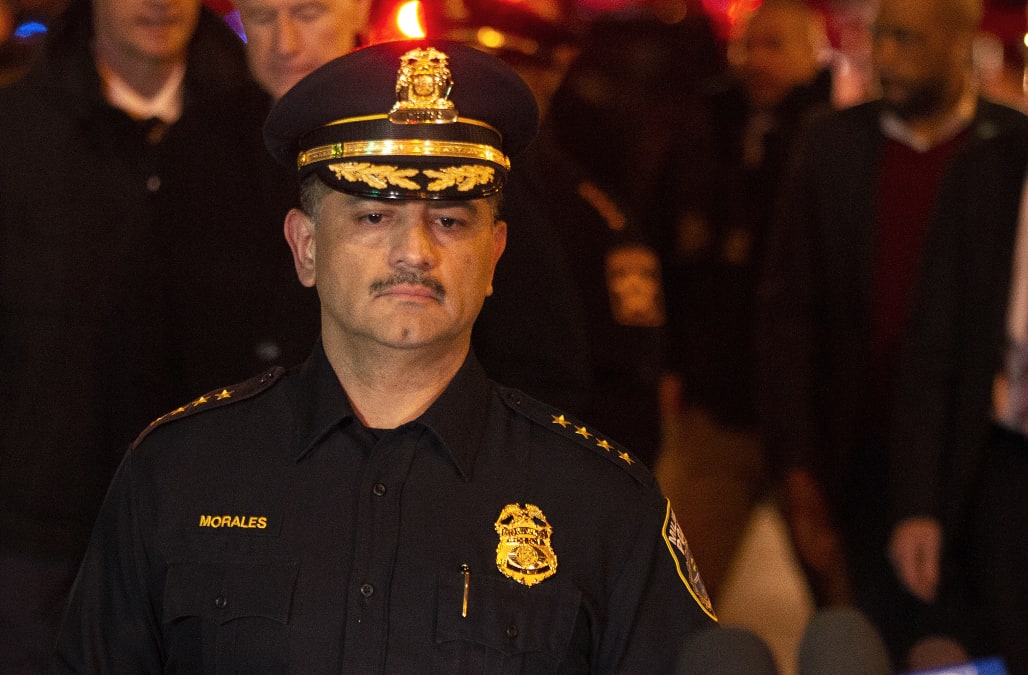 MILWAUKEE (AP) — A Milwaukee electrician who police identified Thursday as the man who fatally shot five co-workers at one of the nation's largest breweries enjoyed building guns, according to neighbors.

Authorities said 51-year-old Anthony Ferrill opened fire at the Molson Coors Brewing Co. complex on Wednesday, killing five male employees before turning his gun on himself. His motive remains a mystery; police say the case is still under investigation. They also haven't released details about how the shooting unfolded.

Milwaukee police Chief Alfonso Morales said the victims were all from the Milwaukee area. He identified them as Jesus Valle Jr., 33, of Milwaukee; Gennady Levshetz, 61, of Mequon; Trevor Wetselaar, 33, of Milwaukee; Dana Walk, 57, of Delafield; and Dale Hudson, 60, of Waukesha.

Ferrill's neighbors said he was a married father of two adult children and one younger daughter. They said he had worked at the brewery for about 15 years as an electrician.

His brother, Benjamin Ferrill, of The Colony, Texas, told The Associated Press: "It’s a tragic loss to everybody. We’re still trying to digest it.”

Erna Roenspies, who lived next door to Ferrill, described him as a nice guy and helpful neighbor who enjoyed building guns with mail-order parts.

Several years ago Ferrill slipped off or fell off a ladder at the brewery and hurt his shoulder, forcing him to miss work. He told Roenspies that “spies” from the brewery were lurking in the neighborhood, watching his activities to make sure he wasn't faking the injury. Once he pointed out the spies' car to her, she said. The spying “irritated” him, she said.

Still, Roenspies, 82, said Ferrill was a “gentleman” who checked up on her to make sure she was all right.

“I considered him a son,” she said. “He wasn't violent. He wasn't a drunk. He was a gentleman. I just can't believe it."

Another neighbor, Elizabeth LaPine, described Ferrill as a quiet person who walked his Doberman pinscher every day, and would sometimes throw a ball around for his dog in the street. She said she lived across the street from Ferrill for 11 years.

LaPine said Ferrill had several cars and always kept them shiny. She said that the last time she saw Ferrill was Sunday, and he had polished up his burgundy Chrysler, which she called his “Sunday car,” and took it for a ride.

The shooting happened at an 82-acre (33-hectare) complex that includes a mix of corporate offices and brewing facilities and employs more than 1,000 people. It's widely known in the Milwaukee area as “Miller Valley," a reference to the Miller Brewing Co. that is now part of Molson Coors.

A massive red Miller sign that towers over the complex is a well-known symbol in a city where beer and brewing are intertwined with local history. The complex features a 160-year-old brewery, a packaging center that fills thousands of cans and bottles every minute and a distribution center the size of five football fields.

Brewery Workers Local 9 of the United Auto Workers, which represents about 400 workers at the complex, issued a statement Thursday calling the shooting a “senseless tragedy" and alerting members that grief counselors would be available at their union hall in West Allis, a Milwaukee suburb.

The ages for Levshetz and Hudson have been corrected.

More from Aol.com:
Driver crashes through brick wall of fire station, injuring firefighter
Harvey Weinstein in ‘disbelief,’ as he remains in hospital: ‘He didn’t do anything wrong’
Cops were so baffled by crime they had to tweet about it: 'SERIOUSLY...'