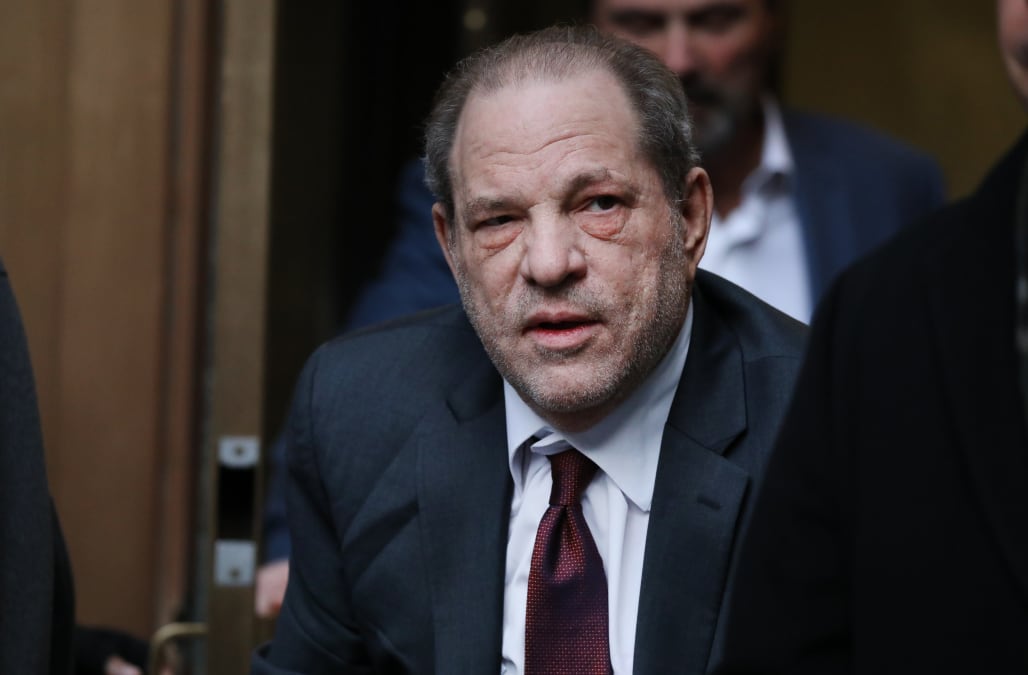 Harvey Weinstein was convicted of rape and remanded into custody on Monday, but he’s still not in jail.

While being moved to Rikers Island in NYC, where he was expected to be housed until his March 11 sentencing, he was rerouted to Bellevue Hospital while experiencing chest pains and high blood pressure, and that’s where he remains. Of course, because he’s not locked behind those Rikers correctional facility doors, there’s been speculation about his status — and treatment.

However, a spokesperson for Weinstein tells Yahoo Entertainment that it’s not up to the former filmmaker where he’s being housed.

“It’s the [New York City Department of Corrections’] decision based on Judge Burke’s order, and whether he's at Bellevue or Rikers he's going to be in a medical unit either way,” Weinstein’s rep says, referring to the request made by his legal team following his conviction to remand him to a medical facility within the penal system.“They are BOTH PRISONS ... The rooms are CELLS at Bellevue.”

The rep goes on to note that Weinstein — who recently had back surgery and used a walker to attend court proceedings — “needs to have proper medical attention given his condition. He would receive the same medical attention and care at Rikers [but] the Dept. of Corrections chooses where to place him.”

Further, Weinstein is “on 10 medications, had back surgery, is certified disabled by doctors and therefore he will be monitored closely regardless of facility,” the rep adds.

On Tuesday, Weinstein’s attorney Donna Rotunno declined to detail Weinstein’s health issues beyond the news that he “went to the hospital with chest pains and high blood pressure.” She said she wouldn’t be “getting into Mr. Weinstein's health problems,” noting, “Have you heard of HIPAA laws?”

However, another one of his attorneys, Arthur Aidala, spoke to the press Tuesday after visiting Weinstein at the hospital and said the disgraced movie maker was in “pretty good spirits” and feeling “energized." But it is “up to the doctors” how long he’ll remain hospitalized. “To me, he looked like he was in good shape,” Aidala added, despite being “somewhat flabbergasted by the verdict.”

Both Aidala and Rotunno said Weinstein’s legal team is working to get him out of jail on bail prior to sentencing next month, in addition to working on a broader appeal to overturn his conviction.

A spokesperson from the New York City Department of Corrections has not yet responded to Yahoo Entertainment’s request for a status update on Inmate No. 06581138Z and when he’ll be transferred. The DOC inmate lookup notes “no facility available” next to his where Weinstein is currently supposed to be assigned.

As Weinstein’s rep noted, if and when Weinstein finally does get to Rikers, he won’t be housed with the general population. In court, Weinstein’s attorneys requested that he be placed in a special medical facility, where inmates with special health issues are kept. (Medical reason or not, high-profile prisoners tend to be housed away from the general population in many instances, for their safety.)

The New York Timesreports that Weinstein’s living conditions in a medical unit would be a better than the average inmate’s. The cells in one of the Rikers medical facilities are three times the size of the average space. Another medical unit in the facility has double-sized rooms with private cells with showers. Some of those have their own TV, bathroom and “possibly a phone, too.”

A former official told the outlet, “It’s like a little hotel, like your own little apartment. You have everything you need. It’s very isolated. It’s a way to guarantee his safety.”

And Weinstein is worried about his safety, according to multiple reports. One of his friends told the NYTwhen the trial started that Weinstein was “terrified” of ending up in prison.

Meanwhile, the corrections department reportedly is worried about keeping him safe. TMZ reports that high-ranking officials within the department fear another “Epstein Incident" — and the scrutiny associated with that. That refers to billionaire Jeffrey Epstein, awaiting trial on sex charges, dying by suicide.

And if Weinstein ever does get to Rikers, the jail will be a short-term holding space for the movie mogul, who was convicted of third-degree rape and first-degree criminal sexual assault related to two different women. (He was acquitted on three other counts, including the two most serious charges of being a sexual predator.) If he’s given incarceration time — he faces up to 29 years — it will be carried out in a state prison upstate.

Weinstein — who has been accused of sexual harassment and/or sexual assault by nearly 100 women, but denies all allegations of nonconsensual sex — also faces sexual assault charges in California, stemming from two separate incidents in 2013. How that would work is that NY prison officials would release him to the custody of Los Angeles authorities for a trial there. If he convicted in L.A., he would serve that sentence after serving whatever sentence he’s given in NY.

Weinstein is also the subject of criminal investigations in Dublin and London.