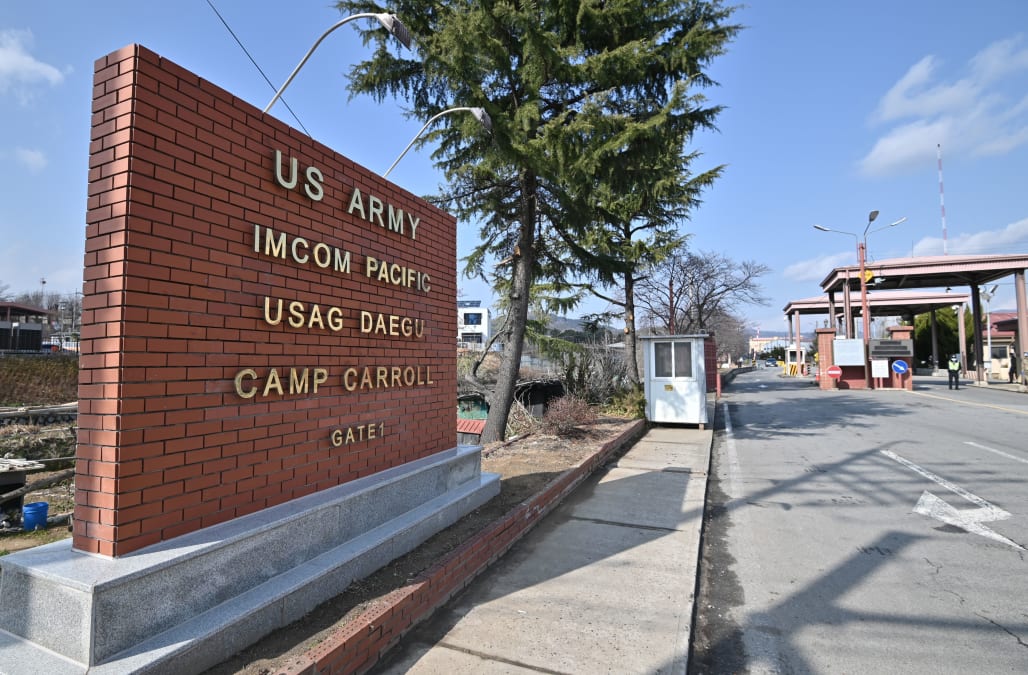 SEOUL (Reuters) - South Korea reported 284 new coronavirus cases on Wednesday, including a U.S. soldier, as health authorities prepared to test more than 200,000 members of a church hit hardest by the outbreak.

The new cases pushed the total tally to 1,261, with the numbers expected to rise as the government widens its testing.

Of the new cases, 134 were from Daegu city, where a branch of the Shincheonji Church of Jesus, which has been linked to outbreaks, is located, the Korea Centers for Disease Control & Prevention (KCDC) said.

The U.S. military reported its first case of the coronavirus on Wednesday, in a 23-year-old soldier based in Camp Carroll, about 20 km (12 miles) from Daegu. The camp is also near a disability centre that has had its own outbreak of the virus.

The soldier was in self-quarantine at his home outside the base, according to a statement by United States Forces Korea (USFK).

"KCDC and USFK health professionals are actively conducting contact tracing to determine whether any others may have been exposed," the statement said, noting the soldier had also recently visited Camp Walker, a base in Daegu.

On Monday, the widow of a former U.S. soldier tested positive for the virus after visiting several bases near Daegu, including Camp Walker.

American military bases across South Korea restricted entry and imposed health screening measures at their gates this week, leading to hours-long waits for some people trying to go to work at the bases.

The U.S. and South Korean militaries have said they are considering scaling back joint training because of mounting concerns about the coronavirus, in one of the first signs of the epidemic's fallout on global U.S. military activities.

U.S. forces are a legacy of the 1950-1953 Korean War and continue to defend against threats from North Korea.

A twelfth death from the virus was reported on Wednesday, a 74-year-old man linked to the Daegu church.

Around 80% of the country's cases - including at the disability centre - are linked to the Daegu church, and to a hospital in nearby Cheongdo County, which some church members are believed to have visited.

The church said it had agreed to provide the government with contact details for all its members and people in trainee programmes, on the understanding the information would not be made public.

"We have obtained a list of 212,000 number of the Shincheonji believers from the church last night," vice health minister Kim Gang-lip told a media briefing.

"Local governments will check whether the believers have respiratory or fever related symptoms and visit their homes to test them."

The disease is believed to have originated in a market selling wildlife in the Chinese city of Wuhan late last year and has infected about 80,000 people and killed more than 2,700 people, the vast majority in China.

South Korean President Moon Jae-in's administration has faced criticism from some citizens for his decision to only restrict arrivals from the epicentre of the outbreak in China, and not all arrivals from China,

A petition calling for Moon's impeachment over his handling of the crisis had gathered more than 687,000 signatures as of Wednesday.

Defending the government's policies at a parliamentary hearing, Health Minister Park Neung-hoo said not only would it be impossible to quarantine the roughly 2,000 Chinese who enter the country each day, it would have been useless as the spread of the virus was caused by South Korean citizens who had travelled to China.