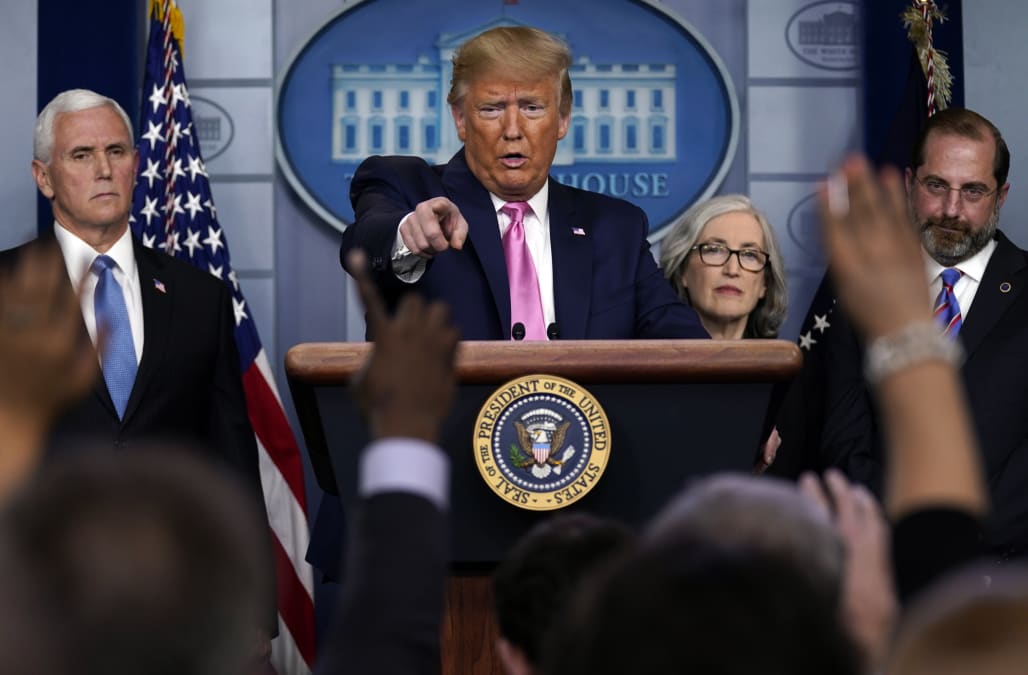 President Donald Trump on Wednesday attempted to ease growing fears over the spreading coronavirus, saying at the White House that his administration has the situation under control and is "ready to adapt" if the virus spreads.

"Because of all we've done, the risk to the American people remains very low," Trump said. "We're ready to adapt and ready to do whatever we have to as the disease spreads, if it spreads," he added.

Trump, speaking from the Brady Briefing Room in the White House, also said he was putting Vice President Mike Pence in charge of his administration's response to the potential pandemic.

The president's address came amid a tumbling stock market and grave criticism from Democrats who say Trump's handling of the outbreak have been inadequate. It also came just one day after the CDC warned that it was only a matter of time before the illness, known as COVID-19, will spread across communities in the United States.

Coronavirus fears have spooked financial markets, which fell for the third straight day Wednesday. On Tuesday, the Dow Jones Industrial Average fell nearly 900 points, and on Monday it dropped more than 1,000 points.

And on Tuesday night, Democratic presidential candidates took turns bashing Trump for his administration's response. Sen. Bernie Sanders, I-Vt., the frontrunner, mocked Trump's claims that the coronavirus is "under control."

Until Wednesday, Trump had appeared to downplay concerns over the situation, while playing up his administration's response to it.

Upon returning from an overseas trip to India, Trump tweeted Wednesday that media outlets were "doing everything possible to make the Caronavirus look as bad as possible, including panicking markets, if possible," misspelling the name of the virus. He then criticized the push back from Democrats on the administration's response to the outbreak and added, "USA in great shape!"

Earlier, speaking at a press conference in India, Trump said the situation is "very well under control in our country."

Those comments stood in stark contrast to warning issued on Tuesday by the CDC that COVID-19 was likely to spread and "that this might be bad."

Federal health officials added Tuesday that they are preparing for a potential pandemic. CDC officials said the virus could disrupt daily lives, including closing schools, forcing people to work from home and delaying elective medical procedures.

In less than a month since the virus was officially declared a public health emergency, the number of confirmed cases globally has risen to more than 81,000, with the virus quickly spreading throughout Europe, with Italy hardest hit so far with 300 confirmed cases in recent days.

The White House, however, could find itself hobbled in its response by cuts to programs over the past three years designed to act in just such a scenario. The White House has reduced the budget for the CDC and Prevention and eliminated several key positions focused on responding to a pandemic, including having a CDC staffer in China working with disease detectives there to quickly identify and contain new pathogens, according to Dr. Tom Frieden, the former head of the CDC under the Obama administration.

The White this week sent to Congress a budget plan for $2.5 billion that would provide funds to speed up vaccine development and production, and stockpile protective equipment — a funding amount that Democrats have called inadequate.