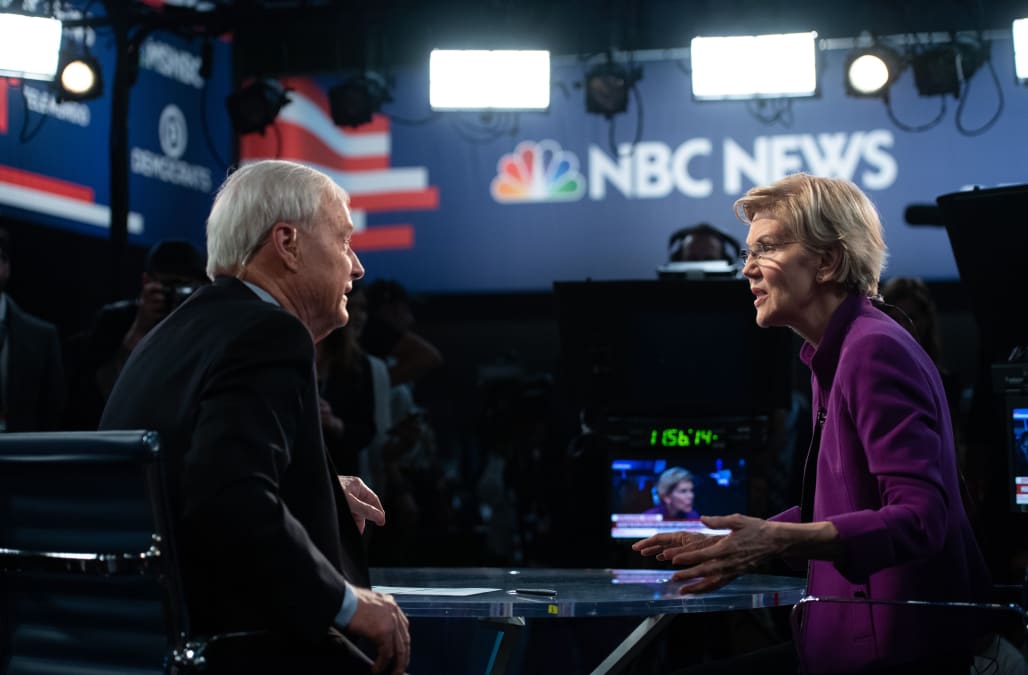 During an interview with Elizabeth Warren after Tuesday night’s Democratic debate in South Carolina, the longtime host went after the senator from Massachusetts for bringing up allegations of sexual harassment by fellow candidate Mike Bloomberg.

Matthews, who has been accused of sexist behavior himself, simply didn’t seem to understand why Bloomberg would deny such an accusation. It was yet another reminder of how sexism in the media ― particularly from a certain coterie of male pundits with blinders on when it comes to women ― has held women back during this campaign cycle.

RELATED: Take a look at the celebrities that support Elizabeth Warren:

The issue Tuesday night was Warren’s willingness to believe a woman who filed a federal lawsuit against Michael Bloomberg and his data company in the late ’90s. In the suit, which was later settled, former salesperson Sekiko Sakai Garrison accused Bloomberg of telling her to “kill it” after she revealed she was pregnant. A former Bloomberg employee recently confirmed her account to The Washington Post.

Garrison also alleged that Bloomberg had a history of making these kinds of comments. Bloomberg told an employee looking for a nanny: “It’s a fucking baby ... All you need is some Black who doesn’t have to speak English to rescue it from a burning building,” according to the suit.

Chris Matthews asks Elizabeth Warren why she believes a female employee who sued Mike Bloomberg for telling her "kill it" when she was pregnant over Bloomberg.

"You believe he's lying? ...Why would he lie? Just to protect himself? ...You’re confident of your accusation?" pic.twitter.com/hVkkQhhXtz

Matthews, in questioning Warren Tuesday night, didn’t appear to know this context ― or knew and skipped over it anyway. Here’s the key exchange between the two of them:

“I believe the woman, which means he’s not telling the truth,” she said.

“And why would he lie?” Matthews asked in a stunning moment. “Just to protect himself?”

“Yeah, and why would she lie?” Warren said.

Matthews paused and threw up his hand. He had no answer. That’s because it strains credulity that a woman, with her job at risk, would lie about comments made by the billionaire who owns the company where she works.

The idea that he wouldn’t believe a woman, who has nothing to gain by coming forward, but would believe a man, who has everything to lose, is appalling.Jennifer Lawless, a political science professor at the University of Virginia.

“The idea that he wouldn’t believe a woman, who has nothing to gain by coming forward, but would believe a man, who has everything to lose, is appalling,” said Jennifer Lawless, a political science professor at the University of Virginia. “It’s also almost unimaginable that he’d doubt a male candidate’s confidence so explicitly.”

To be clear, when the super-wealthy boss of the company who employs you makes any kind of “joke” about your body or your pregnancy, it’s not funny. It’s intimidating. And it is possibly illegal, part of what’s considered a hostile atmosphere in a sexual harassment complaint.

A man running for president in 2020 ― years after the Me Too movement first started ― has everything to lose by admitting to that kind of remark. Particularly this week, after Hollywood producer Harvey Weinstein was convicted of rape, showing the world that women are indeed believable.

“Especially this week, it’s really evident that women’s words are evidence,” said Amanda Hunter, director of research and communications at the Barbara Lee Family Foundation. “I’d imagine a lot of women are watching this very closely especially after the week we’ve had in the news.”

In the past, Bloomberg has apologized for “jokes” he made. But the “kill it” comment is one he has always disavowed.

It’s worth noting that around the same time that the suit was filed against Bloomberg, Matthews settled his own sexual harassment complaint from a former producer who accused him of making inappropriate jokes in front of her.

“The comments were never meant as propositions,” an MSNBC spokesperson said of the incident in 2017, when it came to light. Just jokes, in other words.

In 2016, Matthews was again caught joking, this time making a Bill Cosby rape joke to Hillary Clinton during the Democratic primary season.

He later apologized. In 2018, The Cut detailed a list of sexist comments Matthews has made about Clinton: wondering if troops would “take the orders” from a woman president. Pinching her cheek after an interview. Suggesting Clinton’s success in politics was due to her husband’s philandering. And that’s an abbreviated list.

Matthews was widely criticized for his comments to Warren Wednesday morning. The questions he asked portrayed a stunning amount of tone-deafness about the machinations of sexual harassment.

That the remarks came from a host at an ostensibly “progressive” news network rankled a little harder.

“MSNBC needs to fire Chris Matthews. Today,” said Shaunna Thomas, co-founder and president of Ultra Violet, a national women’s rights organization, in a statement. “Matthews’ refusal to believe women, and history of sexual harassment, make it clear that he is not fit to continue to cover this election.”

Warren has faced particular sexism during her campaign, and has been plagued by questions of her “electability” throughout her presidential run.

“The constant weaponization of electability ― driven in many ways by much of the media ― is sexist,” Thomas told HuffPost over text message on Wednesday.

Thomas doesn’t think gender bias hurt Warren any more than any other candidate this cycle. But Warren, lately, has been most adept at exposing this gender bias.

Warren has hammered Bloomberg for his and his company’s treatment of women. Last week, she so effectively called out the Bloomberg company’s use of nondisclosure agreements in silencing women that she forced the former mayor to say that he’d let three women out of their NDAs. His company also announced that it would no longer force employees to sign NDAs over sexual harassment claims. However, Bloomberg has not released all its employees from their NDAs, only those with specific allegations about the billionaire.

“The narrative that Hillary lost mostly because of sexism created extra hard conditions for all of the women running for president in a year when the vast majority of voters care first and foremost about beating Trump,” said Thomas.