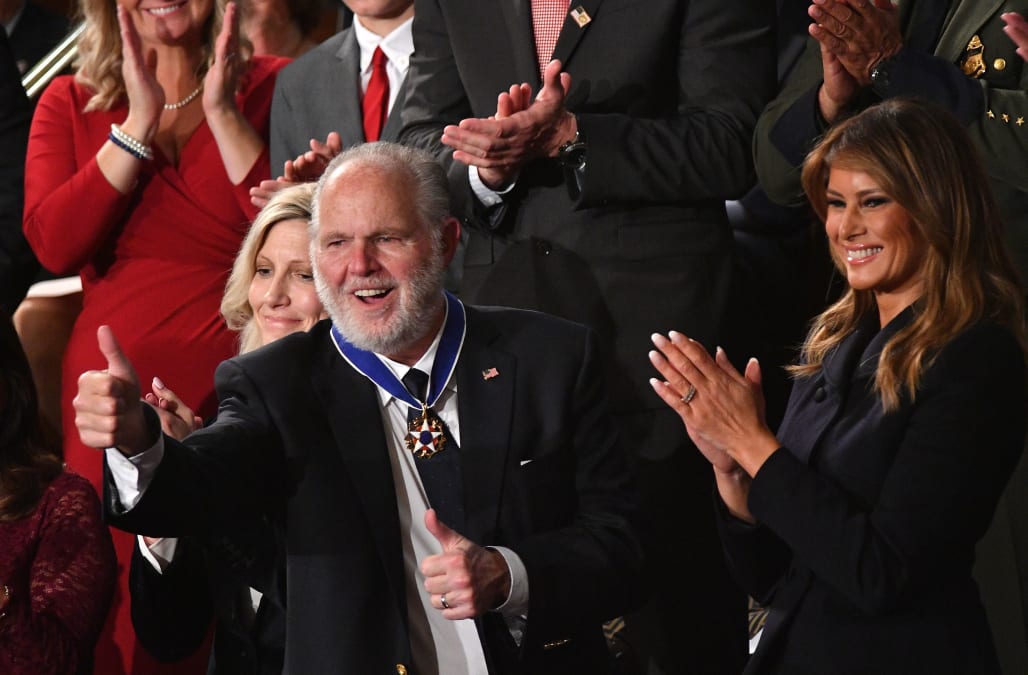 Conservative radio host Rush Limbaugh, who told his listeners that alarmism about the coronavirus was a plot to bring down President Trump, has attacked the CDC official who warned Americans that the virus will inevitably spread in the U.S.

“Dr. Nancy Messonnier of the Centers for Disease Control — which today warned it could be bad, it might be bad, don’t go to school and don’t go to work, stay at home and teleconference — is the sister of the former Deputy Attorney General Rod Rosenstein,” Limbaugh said on Tuesday’s program.

Rosenstein, who resigned from the Justice Department last May, oversaw the investigation by special counsel Robert Mueller that President Trump sought to stop.

Limbaugh explained why he believed Messonnier’s relationship to Rosenstein mattered: “It’s just in that town, I’m telling you, everything is incestuous. Most of that town is establishment-oriented or rooted, which means they despise Trump,” he said.

Limbaugh received the Presidential Medal of Freedom from Trump at his State of the Union speech last month.

On Monday, Limbaugh dismissed the danger presented by the coronavirus outbreak, which has so far killed over 2,700 people worldwide.

“It looks like the coronavirus is being weaponized as yet another element to bring down Donald Trump,” Limbaugh said on his radio program. “Now, I have to tell you the truth about coronavirus. ... Yeah, I’m dead right on this. The coronavirus is the common cold, folks.”

While the coronavirus first presents symptoms similar to those of the common cold — including headache, sore throat and fever — some infected with the virus develop difficulty breathing that can progress into life-threatening respiratory distress syndrome.

“The drive-by media hype of this thing as a pandemic, as the Andromeda strain, as, “Oh my God, if you get it you’re dead,” do you know what the — I think the survival rate is 98 percent. Ninety-eight percent of the people get the coronavirus and survive.”

That figure appears to be correct, according to testimony in Congress Tuesday by acting head of the Department of Homeland Security Chad Wolf, but it might not be as reassuring as Limbaugh's comments implied. No one can predict how many Americans might contract the virus, but if it infects, say, 10 percent of the country, or 33 million people, a 2 percent mortality rate translates to 660,000 deaths. That is almost ten times the number of Americans who died of opioid overdoses in 2017, about 70,000.

In his testimony, Wolf said the 2 percent figure was roughly the same as the death rate from seasonal influenza. In fact, flu kills just 0.1 percent of patients, a rate one-twentieth as high.

With fears rising of a pandemic of coronavirus, which in two months has quickly spread from China to Korea, Europe and the Middle East, Trump plans to address the nation about the U.S. government’s response.

So far there are only 59 cases of the coronavirus reported in the U.S., but the government has tested only 445 people, according to the CDC. The test itself has been found to be faulty, the Washington Post reported, leading health officials to state that the number of U.S. cases could be drastically underreported.

Initially, however, Trump downplayed the threat of the virus to the U.S., and encouraged Americans to invest in the stock market, which suffered a massive sell-off on Monday and Tuesday.

The Coronavirus is very much under control in the USA. We are in contact with everyone and all relevant countries. CDC & World Health have been working hard and very smart. Stock Market starting to look very good to me!

On Tuesday, Larry Kudlow, the director of the National Economic Council, dismissed the CDC’s warnings.

“We have contained this, I won’t say airtight, but pretty close to airtight,” Kudlow told CNBC. In fact, like Trump, Kudlow encouraged Americans to put their money back into the stock market.

“This virus story is not going to last forever,” Kudlow added. “To me, if you are an investor out there and you have a long-term point of view, I would suggest very seriously taking a look at the market, the stock market, that is a lot cheaper than it was a week or two ago.”

The Dow Jones Industrial average fell by 879 points on Tuesday after falling more than 1,000 points on Monday. On Wednesday, despite the investing advice offered by Kudlow and Trump, the Dow fell another 123 points.

Low Ratings Fake News MSDNC (Comcast) & @CNN are doing everything possible to make the Caronavirus look as bad as possible, including panicking markets, if possible. Likewise their incompetent Do Nothing Democrat comrades are all talk, no action. USA in great shape! @CDCgov.....

He did not explain why he believed organizations opposed to him would invent a crisis in February, with nine months to go before the election.