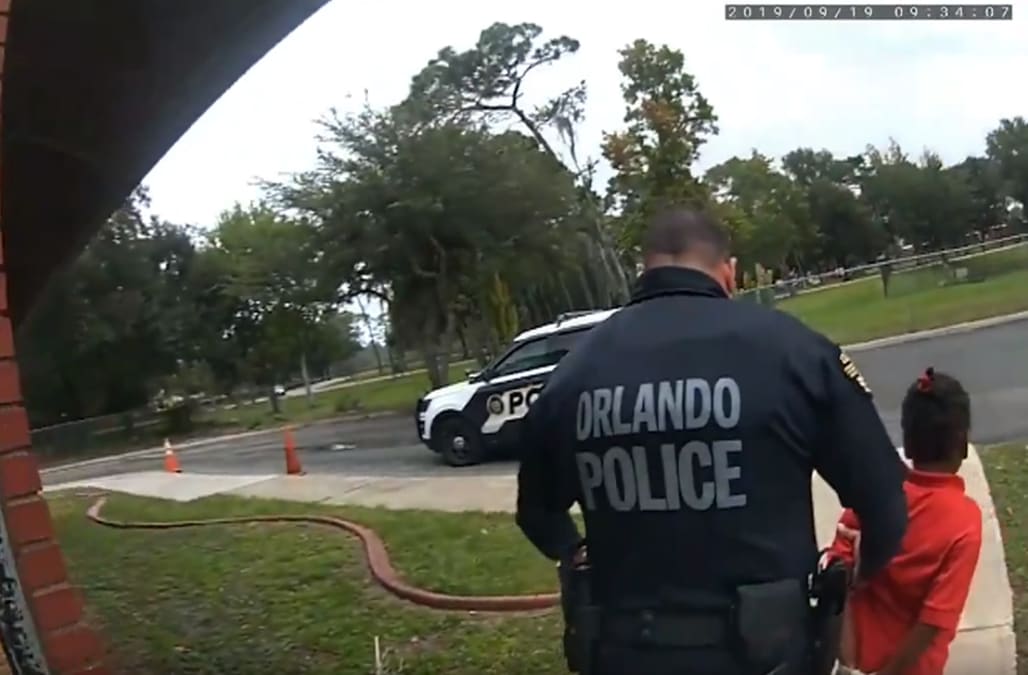 ORLANDO, Fla. (AP) — A police officer's body camera shows a 6-year-old Florida girl crying and begging officers not to arrest her as one fastens zip ties around her wrists at a charter school.

The video that Kaia Rolle's family shared with the Orlando Sentinel and other media outlets Monday shows the girl being arrested in September for kicking and punching staff members at her Orlando charter school.

“What are those for?” Kaia asks about the zip ties in the video.

“They’re for you,” Officer Dennis Turner says before another officer tightens them around her wrists and Kaia begins weeping.

Turner was fired shortly after the arrest. Orlando Police Chief Orlando Rolon said at the time that Turner, a reserve officer, didn't follow department policy of getting the approval of a watch commander to arrest someone younger than 12.

“Help me. Help me, please!” Kaia pleads through tears.

As she is being walked to the vehicle, she cries, “I don’t want to go in a police car.”

The second officer, who has not been identified, responds, “You don’t want to? ... You have to.”

“Please, give me a second chance,” Kaia says.

The video shows the officer lifting the sobbing girl into the back seat of the police vehicle and putting a seat belt around her.

A short time later, Turner returns to the office to talk to Lucious & Emma Nixon Academy administrators, who appear dismayed by what they have witnessed in the school office.

The officer tells them that the juvenile detention center where Kaia was headed is “not like you think.” Turner tells the administrators he has made 6,000 arrests, including a 7-year-old.

When school employees tell the officer that Kaia is 6, not 8 like he thought, he replies, “Now she has broken the record."

Turner had worked in the police agency's reserve unit, which is mostly made up of retired officers who pick up extra-duty jobs for pay. Because he was a reserve officer, he was not a member of the collective bargaining unit, and the police union didn't represent him, Shawn Dunlap of the Fraternal Order of Police Orlando Lodge 25, said in an email Tuesday.

School resource officers came under close scrutiny in Florida after former Broward Deputy Scot Peterson failed to engage a shooter at a Parkland high school in 2018. He was charged last year with child neglect, culpable negligence, and perjury. That case is ongoing.

The Orlando case drew yet more attention to the role of police in schools.

Jeff Kaye, president of California-based School Safety Operations Inc., said in an email that the officer would not only have been fired in some other states but possibly charged with a crime, such as oppression under color of authority.

School administrators might have been better served by contacting the child's parents and working with a counselor, rather than calling police, Kaye said.

“As long as everyone is safe, take a deep breath, slow things down, and make good commonsense decisions," Kaye said. “I can't think of any reason to ever arrest a 6-year-old child, but I say that based on my training and experience and not that of others."

Kaye said he's had several school districts contact him since the video's release saying they want to re-examine their school resource officer programs because they don't want something similar to happen in their schools.

Officials have said that Turner also arrested a 6-year-old boy at another school on the same day as Kaia's arrest for misdemeanor battery in an unrelated incident. However, the boy’s arrest was halted by superiors before the child made it through the full arrest process.

RELATED: Famous trials over the past 25 years

More from Aol.com:
Family of 5 killed in head-on crash after 77-year-old man drives wrong way
Daredevil dies in crash after rocket launch
Mountain lion believed to have attacked 6-year-old is caught and killed