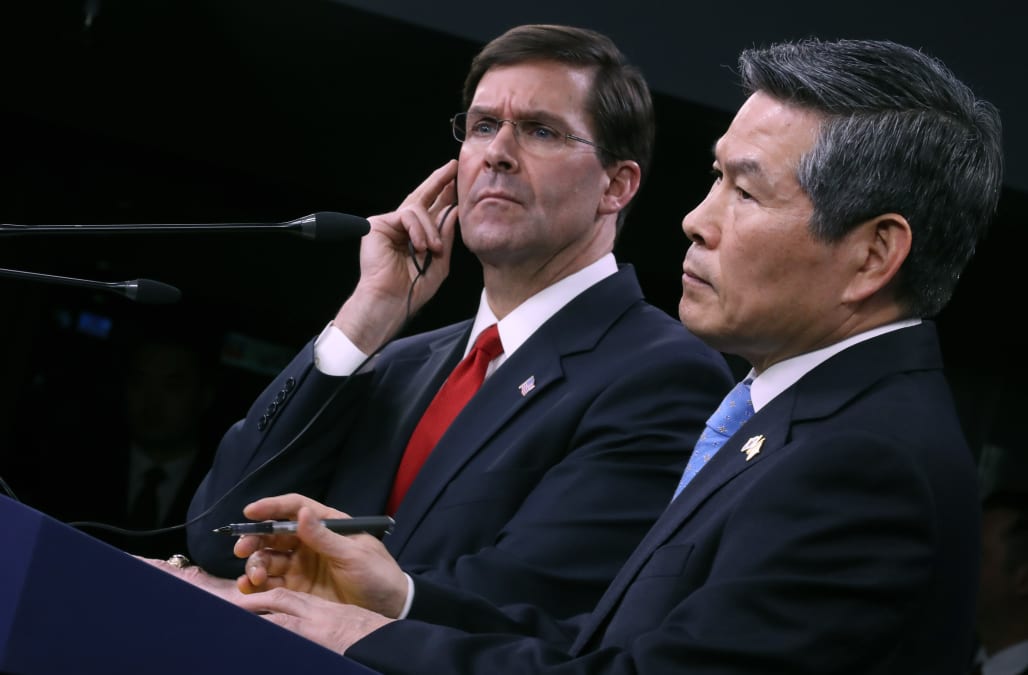 As the novel coronavirus continues to spread beyond China, the U.S. military announced its first confirmed case and commanders across the globe braced for the worst.

The military had remained virtually untouched by the virus until this week. But late Tuesday U.S. Forces Korea announced that a 23-year-old male soldier stationed at Camp Carroll in southeastern Korea had tested positive and was in “self-quarantine” at his off-base home. Shortly afterward, USFK raised its risk level to “high” and restricted U.S. military personnel from attending “non-essential” gatherings at restaurants, bars, clubs and theaters away from their installations. In the same memo, USFK directed its forces to limit all non-mission-essential meetings and travel, and to avoid handshakes, among other steps intended to reduce vulnerability to the virus.

South Korea, where 28,500 U.S. troops are based, had 977 confirmed cases of the virus by Tuesday, with 10 deaths, according to the World Health Organization, making it the second-hardest-hit country after China, where the virus originated. The scale of the outbreak is already affecting military plans.

During a Pentagon press conference Monday with his South Korean counterpart, Jeong Kyeong-doo, Defense Secretary Mark Esper told reporters that U.S. and South Korean military leaders “are looking at scaling back” upcoming command post exercises on the peninsula “due to concerns about the coronavirus.”

Those exercises, scheduled for March, take place mostly in headquarters buildings and “actually put a lot of people in combined spaces [with] people living and sleeping and working together,” said David Maxwell, a retired Army Special Forces colonel who previously served in South Korea and remains in close contact with national security figures there. Such conditions create “a petri dish for spreading disease,” he said, comparing the proximity of personnel in the headquarters exercises to the situation on the cruise ship Diamond Princess, on which 691 of 3,711 passengers and crew became infected with the virus.

The South Korean military, which has about 600,000 troops on active duty, had 13 confirmed cases of the virus as of Sunday, and had canceled leave and restricted troop movements between installations, according to Jeong. “The situation is quite serious,” and grows more so by the day, he said through a translator.

But he and Esper each tried to downplay any effect the virus might have on their ability to defend South Korea. “I’m sure that we will remain fully ready to deal with any threats that we might face together,” Esper said.

The U.S. military and South Korean medical systems should prove up to the challenge presented by the virus, according to Maxwell. “South Korea’s an advanced country,” he said.

Before Tuesday’s announcement of the confirmed U.S. military case in South Korea, Marine Maj. Cassandra Gesecki, a spokesperson for the U.S. Indo-Pacific Command, said a widowed dependent in South Korea was the only known case of the virus connected to the military in the command’s area of responsibility, which stretches from India to Hawaii and Japan to New Zealand.

Other than in Korea, the U.S. military has not yet canceled or curtailed any training in East Asia, said Gesecki Tuesday, adding that about 6,000 U.S. troops are currently taking part in Cobra Gold, an annual multinational exercise in Thailand. Nor has the Navy canceled any port visits in the region, she said.

The virus is also spreading in Europe, with more than 300 cases confirmed on the continent, Air Force Gen. Tod Wolters, the head of U.S. European Command, told the Senate Armed Services Committee Tuesday. TheWorld Health Organization reported 229 of those cases, including six deaths, were in Italy, where more than 35,000 U.S. troops are stationed.

Questioned by Arkansas Republican Sen. Tom Cotton, Wolters confirmed a Stars and Stripes story that said that the military had closed dependent schools, activity centers, theaters and chapels for 72 hours around U.S. military facilities in Vicenza, where between 6,000 and 7,000 U.S. troops are stationed, most of them with families. Wolters said he had also banned U.S. military personnel from traveling to two provinces in Italy, and that it was “50-50” whether the ban in Vicenza would be extended when it expires at the end of Wednesday.

Wolters said he might also need to close facilities and restrict U.S. service members' travel in Germany, where the bulk of U.S. forces stationed in Europe are based and where the World Health Organization reported only 16 cases on Tuesday. “We’re anticipating an increase in the number of cases reported in Germany and we’re prepared to execute,” Wolters said.