5 takeaways from the Democratic debate in South Carolina 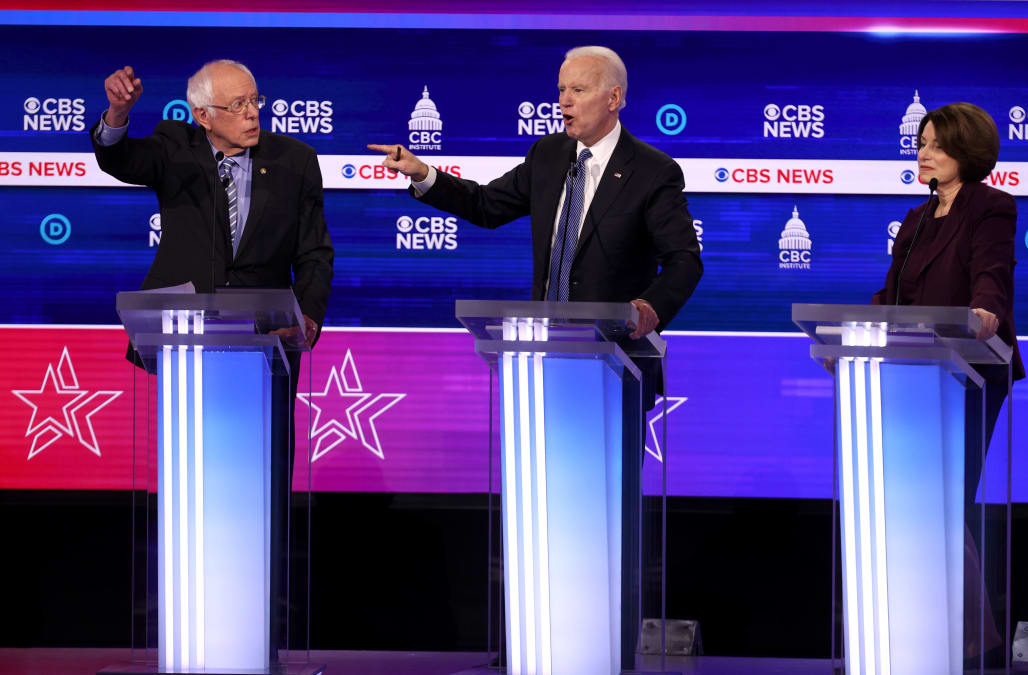 Seven Democratic candidates gathered in Charleston, S.C., in advance of that state’s primary on Saturday, and just three days after Sen. Bernie Sanders established himself as the front-runner with a dominating win in Nevada. Sanders took fire from all sides, but the debate, hosted by CBS News, was the messiest of the primary season by far, as the moderators lost control at times while a raucous crowd that seemed partial to Mike Bloomberg erupted into frequent cheers and boos. Former Vice President Joe Biden promised that he would win in the state, where his long-held lead has been whittled away to single digits by Sanders, while former Mayor Mike Bloomberg attempted to come back from a disastrous showing in his first debate last week.

Here are five takeaways from the 10th Democratic debate.

Sanders deals with life as the front-runner

From the moment the debate began, the six non-Sanders candidates on the stage took aim at the Vermont front-runner. Bloomberg brought up the U.S. intelligence report last week that said Sanders was Russia’s favored candidate. Sen. Elizabeth Warren said she would be a better president than her Senate colleague and fellow progressive. Biden pushed Sanders about his past votes against gun control, which Sanders conceded were a mistake before bringing up his current D- rating with the National Rifle Association. Biden and former Mayor Pete Buttigieg criticized Sanders for his favorable comments about former Cuban leader Fidel Castro.

“Occasionally, it might be a good idea to be honest about American foreign policy, and that includes the fact that America has overthrown governments all over the world,” Sanders said. “And when dictatorships, whether it is the Chinese or the Cubans do something good, you acknowledge that.”

Sanders also faced criticism over the cost of his ambitious agenda of social programs — and concerns that he would hurt Democrats in close elections for Congress.

“I’m hearing my name mentioned a little bit tonight,” Sanders said after the opening salvo. “I wonder why.”

A last stand for Biden or the start of a comeback?

Biden has been consistently leading in South Carolina, buoyed by his support among older African-Americans, and on Tuesday night he was as aggressive as he’s been in these settings. He targeted Steyer, who has spent millions in the Palmetto State and who has cut into Biden’s margin, for his investment in a company that runs private prisons. (Steyer said he has sold his interest in the firm.) Biden was pugnacious with the moderators, repeatedly demanding more time to speak — in contrast to earlier debates where he often cut himself off when his time elapsed — and he argued with Klobuchar over credit for legislation to prevent domestic abusers from buying assault weapons.

Biden, who frequently casts himself as the protector of Barack Obama’s legacy, clashed with Sanders over his assertion that his recent controversial praise for Castro’s literacy program was in line with what Obama once said.

“[Obama] did not in any way suggest there was anything positive about the Cuban government,” Biden claimed.

Yet Obama did praise Castro for Cuba’s progress in education and health care, as he recounted in a 2016 town hall in Argentina.

“What I said is what Barack Obama said,” Sanders said at the debate. “That Cuba made progress on education.”

Biden drew applause in his closing remarks for saying he would appoint a black woman to the Supreme Court if elected.

Bloomberg tries to bounce back

After turning in a terrible performance in last week’s debate, Bloomberg righted the ship to some degree on Tuesday night. He was the first to bring up a subject on the minds of many Americans, the coronavirus, criticizing President Trump for attempting to cut the budget of the Centers for Disease Control. He even earned praise from Sanders for his work in promoting gun legislation.

But it wasn’t a completely clean performance. Bloomberg’s effort at a scripted self-deprecating joke about his previous debate performance fell flat. He also appeared to say “I bought them” in reference to his donations to the 2018 Democrats who flipped the House.

He also was attacked repeatedly by Warren, who again demanded he release all the women who had sued him and his company from their nondisclosure agreements. Warren also cited one complaint that Bloomberg had told an employee to have an abortion, which Bloomberg denied. His response —  “the trouble is with this senator, enough is never enough” — was already turned into a slogan on T-shirts for sale on Warren’s website before the debate even ended.

And in case his debate performance didn’t measure up, Bloomberg’s campaign also ran ads in a number of markets during the debate’s commercial breaks.

Sanders on the spot over Israel

The debate included the first Jewish Americans to seriously contend for the presidency, Bernie Sanders and Mike Bloomberg, and moderator Major Garrett asked them about a difficult subject for many American Jews, as well as non-Jews: the U.S. relationship with Israel.

Sanders, who has allied himself with the progressive wing of the Democratic Party, which is generally sympathetic to the Palestinians, was asked if Jewish Americans might consider him “not supportive enough of Israel,” and whether he would move the U.S. Embassy from Jerusalem back to Tel Aviv, where it had been until last year and where most other foreign embassies are located. President Trump authorized the move to Jerusalem, which is Israel’s capital but also where Palestinians hope to situate their own capital in a future state, in what was seen as a gesture of support for Prime Minister Netanyahu’s right-wing government.

Sanders said it was “something we would take into consideration.”

He hastened to add that he was “very proud of being Jewish” and spent some months as a young man living in Israel, but that “sadly, tragically ... you have a reactionary racist” — Netanyahu — “who is now running that country.” He said as president he would protect Israel’s independence and security, “but you cannot ignore the suffering of the Palestinian people.”

Bloomberg said it was a mistake to move the embassy to Jerusalem without seeking concessions from Israel, but that it was a fait accompli and couldn’t be reversed. He endorsed a two-state solution to the Israeli-Palestinian conflict, which has been long-standing American policy.

Garrett then asked for an opinion by Elizabeth Warren, who is not Jewish, and who, somewhat confusingly, said deciding where to put the U.S. Embassy was “not ours to do,” but “we should let the parties determine the capitals themselves.”

An embarrassment for CBS News

While the debate was spirited, it was also undisciplined, even out of control at times. CBS News’ co-moderators, Norah O’Donnell and Gayle King, were unable to keep the candidates from talking over one another and were too quick to move on before all the candidates could weigh in on topics. The production was also bungled, with odd audio feedback on questioner Margaret Brennan’s microphone and an awkward close where they began to read the outro for the show, only to go to commercial and come back just to read the outro.

Compounding the issue was a crowd that booed and cheered at odd times, generally in support of Bloomberg and against Sanders, earning a few “reallys?” from the senator during some of his answers. The Bloomberg campaign denied to NBC News that they paid people to attend, but a local television station, WCSC Channel 5, reported earlier this month that tickets to the event would require a donation of $1,750 to $3,200 to the South Carolina Democratic Party.

Democratic National Committee communications director Xochitl Hinojosa said tickets were made available to “the DNC, campaigns (with equal allocation), the South Carolina Democratic Party, the Congressional Black Caucus Institute, CBS and Twitter. We invited local and community leaders and DNC supporters. This is the most diverse audience.”